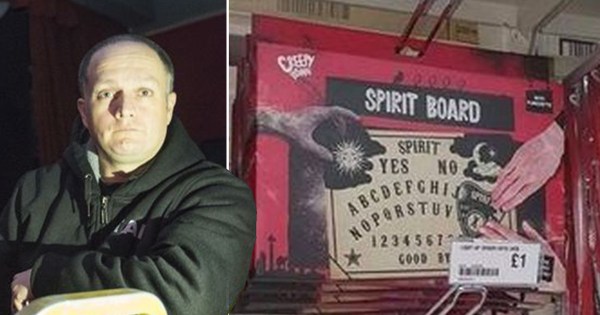 I’m prompted to write about Ouija boards due to a story popping from the media in the UK. To be specific, this …

Paul Marsters, member of True Paranormal Events UK, said he was ‘gobsmacked’ that such an item was on the shelves, claiming they can release deadly demons if not handled by trained mediums.

He said: ‘Ouija boards are most certainly not a toy and should not be available for kids to buy in pound shops for Halloween mind adults that are not trained in how to use them.

‘It does not matter if they are plastic or wood, if the planchette spells the word “Zeus” it is a demon trying to come through and you should not even say the name, never mind continuing to communicate with it.

‘All hell could break loose if the demon attached itself to anyone and follow them around. Nasty spirits can scratch and attack people and should not be messed with as people could get seriously hurt.

‘So I was gobsmacked when I saw that Poundland were selling these ouija boards and was profoundly shocked and just fuming really.’

The paranormal investigator said many people in his field are angry about it, especially because of the heightened risk on Halloween.

While there might indeed be people like Paul who sincerely believe this stuff, none of it is actually true at all.

Let’s briefly delve into this a bit.

The history behind this is that there is a belief that the dead can communicate with the living via what were once commonly known as talking boards. It became very popular within the US after the US civil war when mediums did a lot of business supposedly communicating with departed loved ones.

The modern name “Ouija Board” comes via an 1890 patient filed by a businessman called Elijah Bond. As a bit of harmless fun it perhaps reached its peak in the 1920s. You can of course still buy it, and even if poundland in the UK pulls it off the shelves, you can still easily buy one via Amazon or eBay.

There exists within our culture a religious mythology that these are occult devices that are very dangerous and if you dare to use one, then you are opening yourself up to possession by demons. When such warnings are issued they often come packaged with an associated story or two about a friend of a friend who did use it, and now suffers from serious issues because of this.

Like all good urban legends, try and trace such a story back to an actual instance, and you will generally fail. While such stories and warnings are sincerely related, they don’t describe anything that actually happened.

To be clear, there is exactly zero credible evidence that demons are real, they do not exist.

But Ouija boards do work … right?

There is indeed something going on, but it is not the supernatural.

Serious studies of all of this reveal the following …

What is actually in play here is what is known as the ideomotor response.

Professor of neurology Terence Hines describes this within his 2003 book “Pseudoscience and the Paranormal” as follows:

The planchette is guided by unconscious muscular exertions like those responsible for table movement. Nonetheless, in both cases, the illusion that the object (table or planchette) is moving under its own control is often extremely powerful and sufficient to convince many people that spirits are truly at work … The unconscious muscle movements responsible for the moving tables and Ouija board phenomena seen at seances are examples of a class of phenomena due to what psychologists call a dissociative state. A dissociative state is one in which consciousness is somehow divided or cut off from some aspects of the individual’s normal cognitive, motor, or sensory functions

Pseudoscience and the Paranormal. p. 47

The dire warnings that are issued will often come from people who will suggest that reading Harry Potter books is just as evil and will burn Ouija boards along with any Harry Potter books they can find. (Yes, that really happened)

It is of course inevitable for such warnings to be issued at this time of year along with guidance to parents that trick-or-treating is inherently dangerous for supposedly “Spiritual” reasons.

Generally, the folks issuing dire warnings about all of this tend to be very religious.