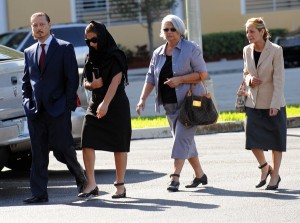 The trial has been on the cards for quite some time now. A family of supposed psychics in South Florida have been defrauding grieving folks out of millions (I blogged about them back in last August here) … and so they have been finally put in the dock. (Yep, that’s four of them in the picture, there you can see Donnie Eli, Rosie Marks, Rose Marks, 60, and Nancy Marks arriving at federal court in West Palm Beach in December 2011. The latest news , as reported in a local paper …

What a South Florida family of psychics did for 20 years was criminal fraud, federal prosecutors say. But the Marks family’s defense team says it was something very different — religion, free speech and a sincere belief in spiritual healing.

In other words, their defense is that they are shut-eyes (psychics who truly believe they are psychic and can really contact the dead).

It does of course push all this into the religious domain and so attempts to play the, “Ah but that is my belief and that gives me a special get-out-of-jail-free card”.

OK, legal details aside, try this …

Following a Morris Cerullo Mission to London a lady called Audrey Reynolds stopped taking medication for epilepsy after she believed herself to have been healed during Cerullo’s rally. She subsequently died following a seizure in her bath. At the coroner’s inquest it was stated: ‘It is a tragedy that she went to this meeting and thought she was cured of everything. Sadly it led to her death.’

What is truly sad here is that very obvious frauds are often not held accountable on the sole basis that they really believe, but should that really be a defense, why should it be the responsibility of the public to work out what is true and what is not, why not hold the frauds to account? Well, the tricky bit is perhaps to observe that people should be free to believe whatever they wish, and should also be free to practise that belief, even if it is obvious to all that it is not true, so how do you square this circle?

OK, so lets look to see what is happening at the trial, where are they drawing the line here?

Nine members of the Fort Lauderdale family of Roma, or gypsies led by fortunetelling matriarch Rose Marks, were arrested in August on federal fraud conspiracy charges and accused of defrauding their clients of $40 million.

Defense attorneys are attacking the criminal indictment on several fronts, hoping to get the charges dismissed before a proposed trial date in November.

Lawyers have argued in court papers that the family members had a constitutionally protected right to practice fortunetelling and spiritual healing because it is a part of their religious belief system and fortunetelling is legally considered to be free speech.

But the prosecutors are saying …

That would not be illegal, but the family took it farther by taking money, jewelry and other items of value and promising that they would “cleanse” them of evil spirits and curses and then return the items. The behavior became criminal, prosecutors said, when the family refused to or failed to return the cash and valuables.

For more details, the indictment against the Rose Marks family can be viewed here.

These folks are on trial, not for their beliefs (even if it is obvious that they do not really believe it and it is clearly a scam), but rather for their criminal behaviour.

Where this puts skeptics is into the role of gatekeepers, specifically in the intersection between all such claims and items of public interest. That is the one spot where it becomes a truly important public service for us to yell “Fraud” and point out the complete lack of any credible evidence for all these claims.