Over 600 have been killed in Yemen in a week — not by drones or Israel, but by Saudi bombs — and strangely enough, those that are very eager to pray for the folks in Gaza, are unable to pray for those in Yemen …

… but have no problem at all in re-purposing the Yemen photos by fraudulently claiming that they are pictures from Gaza.

Some have no problem fact-checking, and are quite happy to accurately report facts … 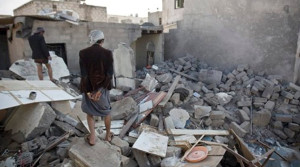 37 dead in bombing of dairy in west Yemen: Governor

At least 37 workers were killed when a dairy in western Yemen was bombed overnight, an official said today after a seventh night of Saudi-led air strikes against Shiite rebels.

Eighty others were wounded at the plant in Hodeida, provincial governor Hasan al-Hai said, without specifying whether the factory was hit by an air strike or rebel shelling.

… and sadly, others will quite obnoxiously repurpose this tragedy for their own specific political agenda.

Here are some other examples