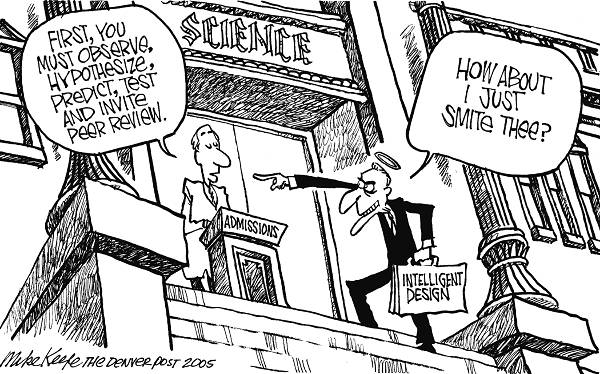 Intelligent Design is the idea that life as we know it was designed and that evolution is a myth. It is essentially creationism dressed up to sound sciency and so the claim is presented without all the religious terminology.

This topic has popped up because the Discovery Institute, the primary promoters of the idea, have announced that Wikipedia has won their censorship award because Wikipedia supposedly misrepresent intelligent design as pseudoscientific and not scientific.

David Klinghoffer, a Senior Fellow at the Discovery Institute, writes about them bestowing the Award upon Wikipedia. As you read the following you can still feel the original spittle drooling from his fingers as he typed it …

For 2018, we’ve chosen what is I think our best, or rather worst, COTY yet: the omnipresent online encyclopedia, Wikipedia. Let’s review the facts briefly.

Intelligent design poses an ultimate question: Does nature offer evidence of purpose and design, or not? All thoughtful people must ask themselves that. Today, the natural first recourse for the questioning individual is to turn to Google. Looking up ID online will bring you immediately, the first entry, to the Wikipedia article. It commences with a lie:

“Intelligent design (ID) is a religious argument for the existence of God, presented by its proponents as “an evidence-based scientific theory about life’s origins”, [sic] though it has been discredited as pseudoscience.”

Actually, there are three lies. Here’s the truth: ID is a scientific, not a religious argument. It is a theory of evolution, of why the forms of life originated and changed over the past 3.9 billion years. An alternative to the increasingly shaky neo-Darwinian theory of blind churning, it argues exclusively in scientific terms, never from religious authority. It’s an argument for design in biology and cosmology, not for the “existence of God.”

OK, so let’s step back and ask a rather key question.

What does the word Scientific actually mean?

When we use the term “Scientific” what we are doing is describing a process that involves formulating a testable hypothesis to explain something that has been observed and then testing it to verify that the hypothesis is not wrong.

The hypothesis needs to be a testable and falsifiable if it is to be of any use – if you can’t verify it then it is of no value.

What is perhaps a far better way of thinking about all of this is to step right back and approach it like this.

Now ask yourself this – How exactly do we test this idea, what possible means do we have for verifying it and working out if life was or was not designed, how can we possibly falsify it?

That’s generally the cue for a stunned silence.

There are of course attempts to answer that question, but so far nothing credible has been presented.

Think of it this way – can you actually dream up anything at all that could not be labelled to have been “designed” that way?

The point is this – if you can’t actually formulate a testable falsifiable hypothesis then its not science.

This is not an opinion, it’s a legal fact – The Dover Trial

Back in 2005 there was a rather famous trial. In October 2004, the Dover Area School District of York County, Pennsylvania changed its biology teaching curriculum to require that intelligent design be presented as an alternative to evolutionary theory. Eleven parents objected and sued the school district, hence it all went to trial.

This became the opportunity for the leading lights within the intelligent design community to present an evidence-based argument that it was a credible scientific idea, and so the Discovery Institute stepped into the arena with all their subject matter experts. The trial itself went on for 40 days and in the end ID failed.

At the time the ID proponents were confident that they would win because the Judge was a Republican appointed religious conservative. Unfortunately for them he was not an activist who permitted personal beliefs to trump facts.

You can read a great deal more about it all here.

“ID is a religious view, a mere re-labeling of creationism, and not a scientific theory”

Within the context of his award Mr Klinghoffer goes on to claim that Intelligent Design … hasn’t been “discredited”.

Given what happened at the Dover trial, that’s not exactly an honest statement of fact, but I suspect he hopes you don’t get to find out about it all.

What became apparent to everybody during the trial is that honesty was a rather elusive concept for many within the Intelligent Design community. That’s not an option, the judge specifically used the term “selective memories and outright lies under oath” to describe the behaviour of the defendants within his findings of fact.

A decade later that has apparently not changed, and that alone tells you a great deal about the reliability of anything that Mr Klinghoffer might claim.

Incidentally, if you still wonder if the Discovery Institute is really a scientific endeavour and not religious, then you should perhaps check out the details on their Wedge document where they plainly state that their agenda is overtly religious and not scientific.