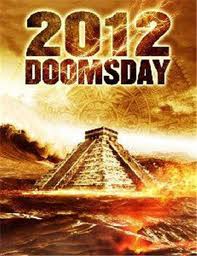 When it comes to the year 2012, our current culture appears to have picked up a bit of silly doomsday baggage. The fact that this has happened is no surprise, because we have a thriving industry focused with a steel like intent on fanning the flames of our very natural human curiosity to reach out and grapple with the unknown. Tragically, truth was sacrificed a very long time ago upon a well-known alter carved in the shape of a dollar symbol. The motivation that drives these peddlers of misinformation is the desire to flog a few more books or movies, facts and evidence are out-of-scope.

OK, so if we take this morass of fuzzy claims and distill it down by stripping away all the nonsense, then what lies at the core of it all? Well, 21st December 2012 is the apparent end of the Mayen 4,125 long-year calendar. This has resulted in two schools of thought:

I should of course warn you (if you are not familiar with such thinking) that this is simply one example of the many many many other examples of end-of-the-world dates that come and go on a very regular basis, there is nothing unique here.

Now, as for the calendar itself, what exactly are we talking about? Well, apparently this is all justified by pointing to the long-count calender which was probably invented by the Olmec, a Pre-Columbian civilization living in the tropical lowlands of south-central Mexico, near the modern-day cities of Veracruz and Tabasco. For some reason it was later associated with the Maya.

So, apparently we reach the long-count date of 13.0.0.0.0 on either 21 or 23 Dec 2012 (yes indeed, the precise date is disputed, I’ll not bore you with the details). So what about the doomsday yarn we have, where did that come from? Well, back in 1966, an American archaeologist called Michael D. Coe, suggested …

“there is a suggestion … that Armageddon would overtake the degenerate peoples of the world and all creation on the final day of the thirteenth [b’ak’tun]. Thus … our present universe [would] be annihilated [in December 2012] when the Great Cycle of the Long Count reaches completion.” – Coe, Michael D. (1966). The Maya. Ancient peoples and places series, no. 52 (1st ed.).

And of course others picked it up and repeated it, thus this meme was born, then grew and evolved in the 1990’s into what we have today.

Its complete bollocks of course. Researchers familiar with the culture have stated time and time again that while the end of the 13th b’ak’tun would perhaps be a cause for celebration, it did not mark the end of the calendar.

“There is nothing in the Maya or Aztec or ancient Mesoamerican prophecy to suggest that they prophesied a sudden or major change of any sort in 2012. The notion of a “Great Cycle” coming to an end is completely a modern invention.” – Mark Van Stone  (See Link here to the FAQ on the Foundation for the Advancement of Mesoamerican Studies WebSite)

In the same FAQ, Mark goes on to observe …

Even if we were to find evidence of actual Maya prophecies about 2012, that doesn’t make them true. Apparently all of Christendom expected Jesus to return in the year 1000, for example. And maybe the most important question to ask was voiced to me by Bill Saturno, discoverer of the San Bartolo murals. If the Maya were such skilled prophets, how could they have missed the Conquest? “Didn’t see that one coming, did they?” The single most devastating disaster to befall the peoples of the Americas of all time, and not a word about it in the entire corpus of Mayan prophetic literature.

“We have no record or knowledge that [the Maya] would think the world would come to an end” – Susan Milbrath, curator of Latin American Art and Archaeology, Florida Museum of Natural History, quoted in USA Today, Wednesday, March 28, 2007, p. 11D

“For the ancient Maya, it was a huge celebration to make it to the end of a whole cycle“. To render December 21, 2012, as a doomsday event or moment of cosmic shifting, is “a complete fabrication and a chance for a lot of people to cash in.” – Sandra Noble, executive director of the Foundation for the Advancement of Mesoamerican Studies, also quoted in USA Today, Wednesday, March 28, 2007, p. 11D

“There will be another cycle, we know the Maya thought there was one before this, and that implies they were comfortable with the idea of another one after this.“ – E. Wyllys Andrews V, director of the Tulane University Middle American Research Institute (MARI) – The sky is not falling.

So, when faced with doomsday claims … be extremely skeptical. And as regards the best means for managing to cope on the last day marked on a calendar, well apparently there is a rather well-known solution that is commonly practiced, you simply go out and buy another fracking calendar.