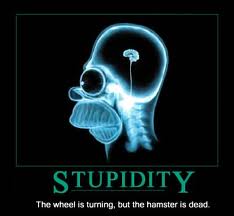 There has been a set of Newsweek slides rattling around the Blogverse, Twitter and Facebook during the past few days that are entitled “Dumb Things that Americans believe” (You can click here to see the original set on the Newsweek site). From this set we learn some quite startling facts such as:

You look at all this and you think, “It just can’t be like this, there must be some mistake here”. Well, while I don’t have hard facts on every one of these factoids, I can assure you that the statistics that relate to fact-based evolution are frighteningly correct. In 2006, three scientists, Miller, Scott and Okamoto published a paper entitled “Public Acceptance of Evolution”. It highlighted some very similar shocking statistics that revealed, for example, that 39% of the US population really does reject evolution as a valid concept. [Public Acceptance of Evolution, Jon D. Miller, Eugenie C. Scott, Shinji Okamoto Science 11 August 2006:Vol. 313. no. 5788, pp. 765 – 766]

What is even more shocking is that the growing creation science movement has been campaigning to have nonsense such as “Intelligent Design” (that’s code for ‘God did it’) taught alongside evolution as an alternative on equal terms within science classes in schools. This is simply not a credible stance because none of the numerous variations of creationism, no matter how you dress them up, have any foundation in reality. The evidence based sciences such as chemistry, biology, geology and physics are awash with a tidal wave of solid proof that confirms evolution. In stark contrast, there is not one single jot of credible evidence that supports any form of creationism.

This all begs the question, why do smart people dismiss all the evidence and embrace the creation fantasy? There are a couple of possible reasons:

In the basic Asch paradigm, the participants — the real subjects and the confederates — were all seated in a classroom. The group was then asked a variety of questions about lines such as how long is line A on a diagram, compare the length of A to an everyday object, which line was longer than the other, which lines were the same length, etc. The group was told to announce their answers to each question out loud. The confederates always provided their answers before the study participant, and always gave the same answer as each other. They answered a few questions correctly but eventually began providing incorrect responses. So what happened? Well, Solomon Asch had hypothesized that the majority of people would not conform to something obviously wrong; however, when surrounded by individuals all voicing an incorrect answer, participants provided incorrect responses on a high proportion of the questions (32%). Seventy-five percent of the participants gave an incorrect answer to at least one question.

Now, picture yourself living in the middle of the bible belt. All you friends are true believers as you are, and each week you go to church where you hear how God did it all and that evolution is a wicked plot, what do you do? Do you conform so that you can then be embraced by the community and be part of it, or do you resist, swim against the tide and end up becoming on outcast.

In other words, I suggesting that these results are not symptomatic of bad education, but rather that it has a lot more to do with the rise of a fundamentalist belief system and how individuals respond when faced with a crowd of folks affirming a fantasy as the truth.

Yes, I believe in freedom of thought, so if folks wish to believe in mythical supernatural entities thats their choice. However, I also believe in freedom of speech, so its important to speak out and label these medieval fantasies for what they are … Bullshit. This then allows those out there with a little niggle of reason that is gently tapping at the back of their mind to be given permission to be a little be more rational because not everybody has gone completely nuts.