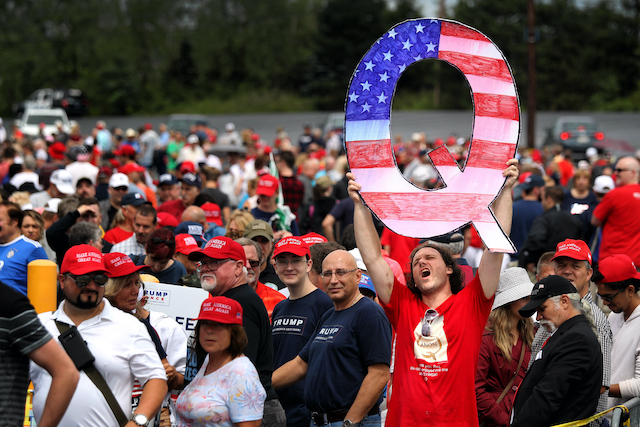 QAnon is reaching a crises point. The political cult that believes that Trump is the divinely appointed one, selected by God to fight a cabal of Satan-worshipping pedophiles, now needs to come to terms with his election loss.

To be honest, if Trump can’t, then they will not, but will perhaps embrace the idea that what is currently happening is all part of the plan. The moment he does concede, then their crises of faith has well and truly arrived. However, even now some have already reached the crises point.

President Trump’s election loss and the week-long silence of “Q,” the QAnon movement’s mysterious prophet, have wrenched some believers into a crisis of faith, with factions voicing unease about their future or rallying others to stay calm and “trust the plan.”

Ron Watkins, the administrator of Q’s online sanctuary on the message board 8kun has quit and some are seriously wondering if it was all a hoax. “Have we all been conned?” one user wrote Saturday on 8kun.

Er … yes, yes you have. Welcome back to reality.

One QAnon account, known as Praying Medic, told its more than 400,000 Twitter followers that many supporters “had to be talked off the ledge” in the past week but that Trump’s strategy remained in motion. Praying Medic tweeted: “He’s going to stick the knife in and twist it. He has no plans to leave office. Ever.”

“The majority reaction from QAnon followers has been outright denial,” View said. Many expect Trump will seal his reelection through his team’s so-far-unsuccessful legal skirmishes, and “if that doesn’t happen and Joe Biden is inaugurated on Jan. 20, the cognitive dissonance will be absolutely as big as it’s ever been for QAnon followers.”

What do others think?

Rita Katz, the executive director of SITE Intelligence Group, which monitors online extremism, said she expects the QAnon following will continue to grow online, regardless of who created or operated its presence online.

“It’s a dangerous network. It’s a dangerous movement that truly believes that Biden and other Democrats are killing kids,” Katz said. “And now, with Biden’s projected victory, the QAnon movement believes with the same zealous certainty that the whole thing is a sham. And that’s a major problem, because … these aren’t a bunch of harmless keyboard warriors — they’re adherents of a movement that has resulted in real-life violence.”

There exists a distinct possibility of domestic terrorism fuelled by these delusional cult fanatics.

“Biden will NEVER be president,” wrote one QAnon believer, still firmly stuck in the denial stage of grief.

“Trump knows what he is doing,” wrote a member of a QAnon forum, well on his way to bargaining. “He is letting the Dems, technocrats and media publicly hang themselves.”

Some QAnon believers, however, were already inching toward acceptance.

“We’re losing,” one tweeted. “Not sure I trust the plan anymore. Not sure there even is a plan.”

What happens what a Crises hits a cult?

The fantasy has Trump at the core of it, so his loss creates a crises.

How do cults handle a crises where reality conflicts with belief, has this ever been studied?

Actually, yes it has.

Back in 1956, Leon Festinger, an American social psychologist, wrote a book entitled When Prophecy Fails. It starts with the discovery of a group of UFO believers who truly believed the world would soon end, and that a UFO would rescue just them. The cult leader, Dorothy Martin, was a Chicago housewife who had experimented with automatic writing, and out of this came her prophecy . In response to it, she and her followers had given away money and possessions to prepare for their departure on a flying saucer which was to rescue them on 21 December 1954.

When Dr Festinger and team came across stories about them they thought, “lets study these folks and see what happens to them after 21st Dec”, and so the now famous study was born.

Here is how Festinger, and his colleagues that infiltrated Keech’s group, reported the sequence of events:

Festinger had previously made the observation that … “If more and more people can be persuaded that the system of belief is correct, then clearly it must after all be correct.“, so he predicted that what would happen. After the inevitable disconfirmation there would be an enthusiastic effort at proselytizing to seek social support and lessen the pain of disconfirmation, and that is exactly what happened.

The psychological concept that describes all this is Cognitive dissonance, and came out of the above study. It is now one of the most influential and extensively studied theories in social psychology. Cognitive dissonance theory explains human behavior by positing that people have a bias to seek consonance between their expectations and reality. People engage in a process called “dissonance reduction”, which can be achieved in one of three ways: lowering the importance of one of the discordant factors, adding consonant elements, or changing one of the dissonant factors. This bias sheds light on otherwise puzzling, irrational, and even destructive human behavior.

With QAnon we can now all see this playing out.