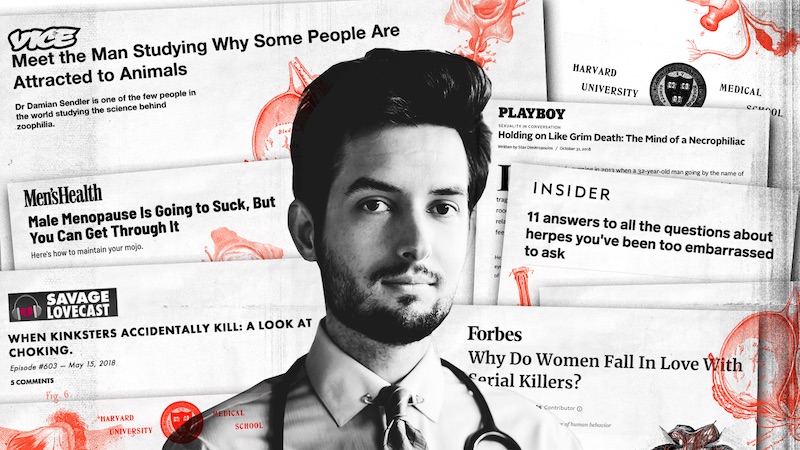 If you look up Dr. Damian Jacob Markiewicz Sendler online, you might think he has a MD and a PhD from Harvard Medical School. He presents himself as the chief of sexology at a non-profit health research foundation based in New York. His website states he’s one of the youngest elected members of the American Psychiatric Association and the American Academy of Psychiatry and the Law, and that Barack Obama gave him a President’s Gold Service Award for his contributions in medicine and mental health.

Based on the information available online, Sendler could be one of the most accomplished 28-year-olds in medicine.

But he’s not. Those are all lies.

What is also quite jaw-dropping about this is not just the revelation that almost everything he claimed about himself is fake and that he has in fact more or less invented his entire academic career, but also the fact that most of the media who tapped into his kinky sex claims really should have checked, but did not …

They all lapped up his fodder up because he was churning out the ideal click-bait – a sexpert who specialised in kink . The exception was Jennings Brown at Gizmodo, who smelled something more than a bit off and so …

After weeks of interviewing and corresponding with dozens of sources at universities and hospitals, I’ve finally parsed fact from fiction. And after interviewing Sendler for several hours, I figured out how he’s gotten away with it—until now.

It’s a long and quite frankly fascinating read with insights into the mind of a, as Mr Brown labels him, fabulist. I encourage you, if time permits, to give it a read.

I do have a bit of an Update

Mr Sendler has a Website that was previously used to promote his fictitious accomplishments. That has changed since the Gizmodo article came out. It now has a statement that is dated 3rd March.

It opens as follows …

RE: Reporting by Gizmodo

It looks like the biggest controversy surrounds two research papers from Journal of Forensic and Legal Medicine, as well as some work I described related to suicidal behavior (published abstract). No one has read these papers, yet everyone has an opinion about them as being suspicious.

Er … no. That’s classic deflection. The biggest controversy is that this guy not only falsely claimed to be a medical doctor who had qualified at Harvard, but he actually practised medicine without any qualifications at all.

As Gizmodo points out, he very specifically claimed this, not just on his website but within the Gizmodo office …

…He maintained direct eye contact with me as he lied about himself and spewed pseudo-psychological bunk….

…“I got into Harvard Medical School for MD, PhD, and Masters degree combined,” Sendler told me…

But Jennings at Gizmodo did not simply take him at his word, he checked, as all good reporters should do. He explains …

Two employees of the Harvard Medical School registrar confirmed to me that Sendler was never enrolled and never received a MD from the medical school. A Harvard spokesperson told me Sendler never received a PhD or any degree from Harvard University.

So basically the statement on Mr Sendler’s website is yet more fantasy. The Gizmodo revelation is not a quibble about some academic papers, it is a very clear trail of evidence that Mr Sendler’s claimed academic credentials are fraudulent.

Nope, it simply babbles on about a couple of papers, and completely sidesteps it all with this …

I will ignore comments about my character, or some other allusions to “inflatable reality.”

Once again … er no, it is not just about “character”, it is about a guy who has rather blatantly manufactured a completely bogus academic career and claimed qualifications that he does not have.

It’s not just the bogus MD and Ph.D

The extremely serious issue here is not simply the bogus claims, but that this guy actually practised medicine and solicited for patients without being licensed, and without any meaningful qualifications for doing so at all.

Why Did he do this and think he could get away with it?

There is this insight from Mr Sendler himself when asked to explain why he made it all up. He laid it out as follows …

“You have to understand that in the world where people use—even the President of this country uses Twitter and creates falsehoods every day,” Sendler said. “How do we then quantify the degree of guilt that you can do, right? Because, you see, if the most powerful man can do this eight, nine thousand times… and he doesn’t care. He still does his thing, and people still support him because they believe in the agenda that he executes.”…

…“Sometimes it really matters how you can sell things and convince people,” Sendler told me, moments before he left my office. “Reality is inflatable and everything is part of the game.”

Lesson of the Day

Doubt is your friend, learn to be skeptical and to ask questions, then check, especially if what is being promoted is weird, unusual or extraordinary. This guy claimed to be a Subject Matter Expert in kink and fetish, a sexpert. Luckily one journalist, Jennings Brown at Gizmodo, did not just believe but instead has done a fine piece of investigative journalism that has exposed the sham.