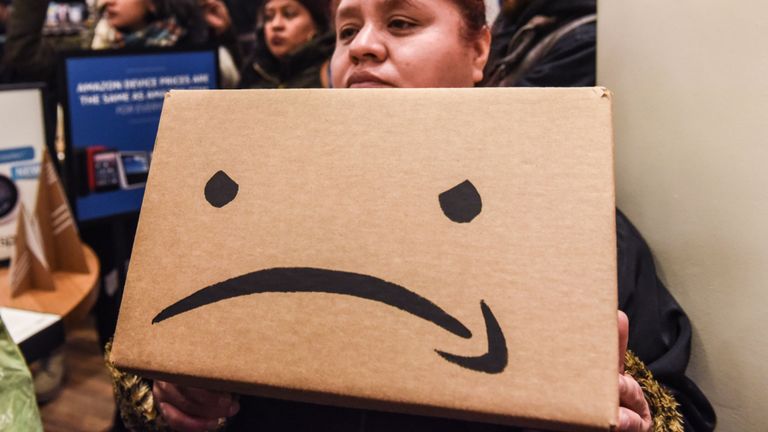 If you go to Amazon and enter “Autism Cure” you will be offered a long selection of complete and utter bullshit. Given the recent news, this is to some degree a bit surprising, and yet given their desire to publish anything just to make a buck or two, perhaps not. A few days ago the following was being reported by the media …

The titles suggested pseudoscientific methods such as ingesting and bathing in a potentially toxic form of bleach and taking medication meant to treat arsenic and lead poisoning.

Amazon confirmed Tuesday that the books “Healing the Symptoms Known as Autism” and “Fight Autism and Win” are no longer available, but declined to answer specific questions about why it had removed them or whether they were part of a larger cleanup effort, citing a policy of not commenting on individual accounts.

The move by Amazon comes on the heels of a report in Wired published Monday that criticized the retail giant for offering medically dubious books and dangerous methods for reversing autism spectrum disorder. For years, news organizations have pointed out Amazon’s practice of hosting books that promote vaccine and other health-related misinformation, but the pressure has intensified in recent weeks.

The Idea of a Cure is a myth

So yes, the named books are gone from Amazon, but much of what remains is pseudoscientific nonsense. Let’s be wholly clear about this, there is no cure for Autism, it is a lifelong condition that affects how people understand and interact with the world around them, including how they communicate with other people. The best possible strategy consists of support and coping guidance. Anybody selling you a cure is running a con.

What has been happening at Amazon?

A Wired article published on 11 March 2019 has the details. To highlight the concern, they even went as far as follows …

To test the system, we uploaded a fake Kindle book titled How To Cure Autism: A guide to using chlorine dioxide to cure autism. The listing was approved within two hours. When creating the book, Amazon’s Kindle publishing service suggested a stock cover image that made it appear as though the book had been approved by the FDA. 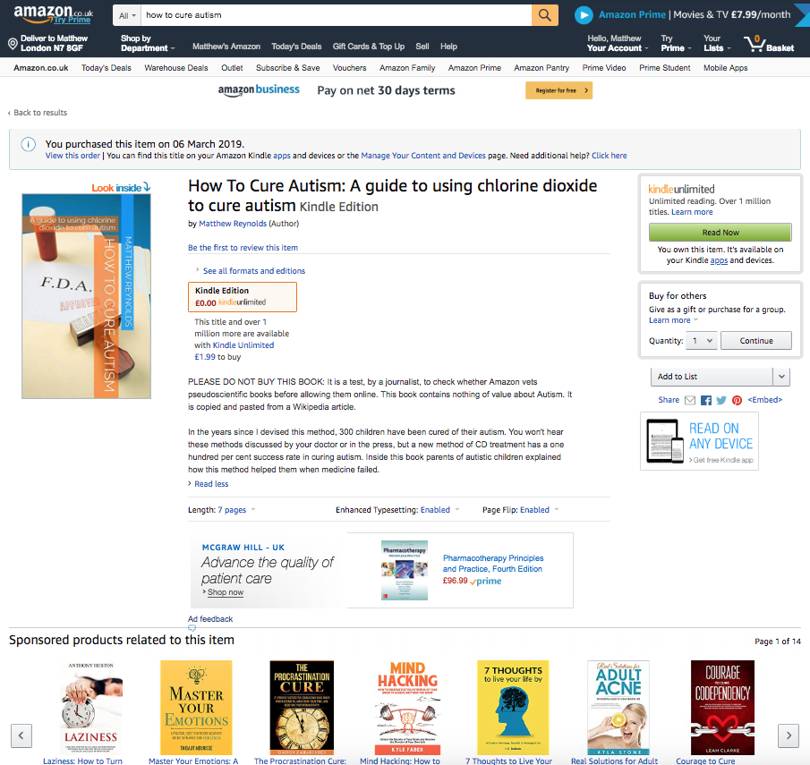 As you can see within the image above, there was no trickery by the journalists here, they were wholly transparent, and announced that it was a test …

The book – which featured a prominent disclaimer declaring its real nature – consisted of seven pages cribbed from the Wikipedia entry on autism plus a brief fabricated paragraph about chlorine dioxide. We were also able to launch an advertising campaign for the book. With no prompting, Amazon’s automated service suggested we targeted our book against the keywords “autism cure” and “chlorine dioxide”. Amazon’s advertising service also autocompletes keywords as you start typing them. After typing the word “miracle”, Amazon’s system suggested we target our book against the terms “Miracle Mineral Solution chlorine dioxide” and “Miracle Mineral Solution supplement”. When we typed in “DMSA”, Amazon’s system suggested “DMSA for chelation” – a reference to a drug intended for use only as an antidote in cases of heavy metal poisoning.

In response to their article, Amazon pulled some of the books Wired identified. That however is PR, and does not address the fundamental problem. Amazon’s platform is still one where the fraudsters and con artists can easily sell pseudoscientific nonsense to the gullible.

Where can I get good help on Autism?

Don’t use Dr Google or randomly key search terms into Amazon, but instead find the best possible most reliable sources available. They can point you in the right direction.

Below are a few suggestions…

If you know of other good support groups that don’t buy into pseudoscientific nonsense, but instead offer reliable evidence-based support, then please help by dropping a comment below with a link for others to find.

Hint: If you encounter people promoting the idea that vaccines cause autism, then avoid (for example TACA tends to support this robustly debunked claim so they are best avoided).

Science Educator Dawn Pedersen has a great list (from 2015) of the Good and the Bad. She has referenced each, and explains who the bad guys are and why they should be avoided.