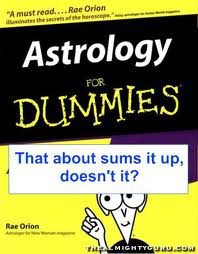 The title of the Blog posting in Today’s Guardian here is “Should we debunk astrologers more respectfully?” … Ah, a challenging question indeed … <pauses for less than a second to consider it> … OK, the short answer is … “No, its complete Bollocks”.

Practitioners of this gibberish are conning folks out of money by making claims that are totally groundless. The folks who deserve respect are those who have credible claims, these folks have none. Now obviously telling them that their precious beliefs are complete nonsense and that they are total fools for believing in it will not win any friends … but, to be totally frank, I’ve no interest in converting them. Instead my prime focus are the others sitting on the fence listening to the conversation … they not only need to hear that it is gibberish, but also deserve that truth.

Now least you wonder … its Martin Robins blog … but its not him writing this, he has a guest blogger, Dr Rebekah Higgitt, who apparently does not believe in Astrology, yet still appears to be coming out with a bit of nonsense that deserves a few comments …

I was critical of the knee-jerk response of many scientists, science writers and fans of science. I also had some quibbles about his post, … I do believe that a little knowledge and understanding can help the cause of science communication far more than ridicule.

Er … no. The concept of respecting complete nonsense is not a place I wish to go.

This has resulted in widespread derision from those who can see nothing wrong with stating that “astrology is rubbish” and “nonsense”. Most, however, have failed to understand exactly what has annoyed these astrologers, or to take the time to find out what astrology actually is.

To be frank, I don’t give two hoots if astrologers are annoyed to have their insane beliefs correctly labeled as nonsense, nor do I care why they are annoyed.

You may feel that there is no need to understand something that you know is rubbish,

Nope, that is simply not true … the reason for calling it gibberish is not because we don’t understand, its because we do.

They need to be able to explain that astrology fails because its hypothesis – that the positions of the planets can influence or give information about earthly events and personalities – has not been demonstrated.

Er … but thats what you are doing when you state that its rubbish.

The Astrological Association is not complaining about a statement such as this. Rather, they consider it unfair that they are represented as having no knowledge of the astronomy and celestial mechanics that Cox and O’Briain are paid to explain on TV. They are annoyed that astrology is considered to consist solely of those who read and write newspaper horoscopes. Serious astrologers often have an excellent understanding of, and respect for, astronomy. They are, in fact, a not insignificant audience for astronomy programmes, lectures and books.

Nope, not true … they are actually complaining that their precious belief has been quite rightly challenged. What they believe is not science and has been proven false … seriously, what do they honestly expect. Most folks do not want, nor expect, a long detailed explanation … its a program about Astronomy, and not focused on debunking nonsense, so why waste time doing that.

Sigh! … she then rambles on about how science and astronomy where once connected … but so what, gibberish remains gibberish, no matter how hard you try to dress it up. In the end the reality is that astrology simply cannot be taken seriously, there is just not one jot of evidence for it to have any claim to credibility.

2 thoughts on “Should we debunk astrologers more respectfully?”