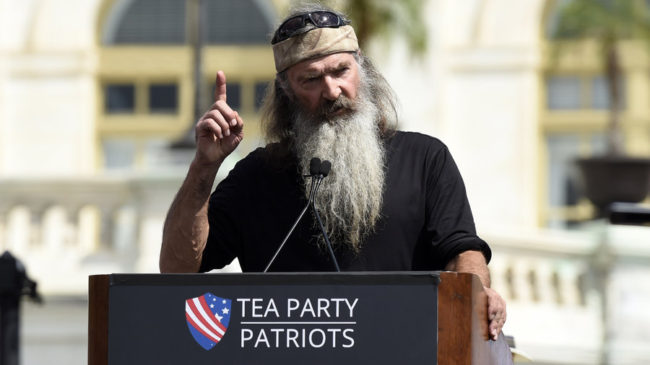 The claim that “Hillary Clinton Lies Because Satan Controls The Democratic Party” is of course a bit of political theatre and so when you learn who made this claim, then you will simply roll your eyes, because rhetoric like this is the norm for this guy and not an exception.

It was Duck Dynasty Phil Robertson.

This story has popped up from “Breitbart News Daily”, the grand central station for many wacky ideas. There he is pushing his new movie “Torchbearer,” which has been directed by Donald Trump campaign CEO Steve Bannon and produced by Trump aide and Breitbart contributor David Bossie. The movie is of course also a bit of political theatre that, as explained by Mr Robertson, has this message …

“When you take out God as the anchor of your civilization you open the door to tyranny and instead of human rights you have the will to power of the ruler who makes himself the sole determiner of what is true and just. Might makes right.”

Well yes, I just blew your irony meter there, sorry about that. When it comes to words like “tyranny”, “might is right”, and “sole determiner of what is right”, that more or less sums up what religion is all about and also is verified by the long history of how it actually behaves.

No please, don’t go and install a new irony meter just yet, because I should also point out that these folks have of course not just hitched, but arc-welded their moral-justice and human-rights wagon to the Trump train. That of course was a smart move because as we all know Mr Trump is a shining bastion of decency, morality, honesty, equality, financial integrity, and he has a deep respect for women … right?

Did he really claim the DNC is controlled by Satan?

The idea that he claimed this is both viable and credible, but it is always worth checking things like this. The observation that he promoted this wacky silliness plays to what we might feel, but it is still important to fact-check.

The text of what was said was as follows …

Our founding fathers warned us repeatedly to never let this day come, but the day has now come upon us. I mean, think about it. The Democratic Party on [inaudible] when Barack Obama ran, they literally booed God out of the Democratic Party. I mean, not only ran Him out and took His name out of their platform, they booed Him out. So, you get what you ask for, so here we are. So the bottom line is, [when someone said they] entertain the thought of maybe voting for Hillary Clinton, I said, they ran God out of the Democratic Party. She has a hard time telling the truth because the Evil One is the Father of Lies, according to Jesus, and she’s living proof of it, my man.

OK, small side note. When you hear the term “Father of Lies” what prominent name from this election season immediately springs into your mind?

Claim: They Ran God out of the Democratic Party

OK, let’s examine this aspect then.

How many democrats in the senate are Christian?

Answer: Almost all of them.

The same statistics hold true in Congress, they are also almost all Christian.

What about Hillary and Tim, surely they must be godless people, after all that is what Mr Duck is assuring us is the case?

Nope, we know that Hillary is a Methodist and that Tim is Catholic.

The issue here is that what Mr Robertson is actually saying is that the Democrats don’t pander to religious extremists and don’t permit public policy to be dictated by ancient myths, but instead opt for attributes such as basic human decency, human rights, and equality to guide them, and so they are not inclined to promote policies that shove specific variations of religious belief down everybody’s throats.

So who is this bastion of Christian virtue that Mr Robertson wants you to vote for because all these “godless” Christian democrats refuse to impose their specific beliefs upon you?

Why it is of course Mr Trump, a shining example of Christian virtue and basic human decency … right?

What can I say to that except that perhaps tonight’s debate may indeed prove to be interesting given the latest revelations concerning him. I’d recommend stocking up on popcorn.