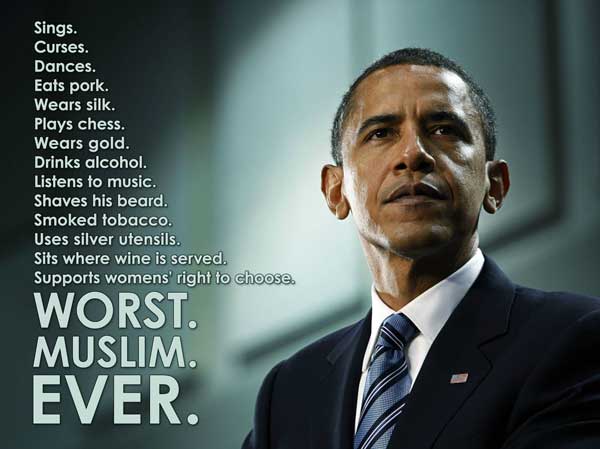 We do all know that it is perhaps part of the human condition for many wacky ideas to float about, but sometimes even that knowledge does not insulate you from being surprised when something truly bizarre pops it.

Perhaps the degree of surprise is in some respects source driven.

Conservapedia is a well-known bastion of absurd nonsense and so finding weird claims such as “Obama is really a Muslim” there is not a surprise and is instead to be expected. It self-describes itself as fundamentalist Christian alternative to Wikipedia, but is actually just a vanity project run by homeschool teacher Andrew Scholarly that parrots his specific rather eccentric ideas. My personal favourite is the page he has on General Relativity that asserts it to be a myth. Well OK, when I typed the word “eccentric” there I was actually trying to spell the word “insane”, because while it might indeed be tempting to consider it to be a parody or satire site, he is rather sadly being truly sincere.

However, when somebody prominent parrots a wacky notion, then we perhaps do have a bit of a surprise.

Franklin Graham, the son of the more famous Billy Graham, was recently being interviewed about his new book and started down this “Obama and Islam” line as follows …

“The president, when he was growing up, his influences were Islam,” Graham opined. “His paternal father is Muslim, his step father was a Muslim, he went to Muslim schools. So, his formative years were all guided by influences of Islam.”

“And so, his Christian position, I don’t know,” the pastor continued. “All I know is that the policies that he has stood behind as president have been against Christ and against his teaching. Abortion is a sin, and if you look at same-sex marriage, this is a sin against God.”

If indeed Mr Graham was correct about Mr Obama’s primary influences being Islamic, then Mr Obama should not be pro-choice and should not be in favour of same-sex marriage, because almost every single strand of Islamic thinking is aligned with Mr Franklins misogynistic homophobic prejudice that masquerades as supposed religious truth. Basically he is pandering to the “Obama is a Muslim” urban legend and using it to demonize him for being a decent human being.

How far back does the “Obama is a Muslim” idea go?

Ever since he campaigned for a seat in the senate back in 2004, the claim that he is really a Muslim has been popping up despite it being well-known that he was a member of the Trinity United Church of Christ from 1992 until 2008. The idea is basically an Urban Legend and so can emerge from some rather odd places. For example during the 2008 campaign a county coordinator for Hilary Clinton’s campaign was caught forwarding the idea in an email. She was quite rightly booted out for the promotion of this absurd silliness.

Often the claim goes hand-in-hand with other weird assertions, for example that Obama is the anti-christ. As a side note, I have a couple of observations on that one …

How popular is the idea?

A 2010 Pew Research poll revealed that 18% of Americans and 30% of Republicans believed that Obama is a Muslim.

Although the number of conservative Republicans who believe Obama is a Muslim stagnated between 2010 and 2012, it has more than doubled since 2008 despite the Christian church-goer’s repeated affirmations of his faith.

We quite frankly cannot avoid the observation that what perhaps grants this specific urban legend some traction is that it serves the purpose of masking the one of the actual root reasons for opposing Obama – racism. People, perhaps finding it difficult to come to terms that this is what is really at the basis of their emotional response to him, rationalise their internal negative feelings by embracing the “Obama is a Muslim” narrative and so tell themselves that they are not really being racist.

Because it meets this emotional need, it enables the urban legend to have an immunity to actual facts.

Are we now living in the Post-truth age?

It is a popular idea, perhaps reenforced by the observations of Trump in action, that we have moved into a post-truth age, but it is not strictly correct because we as humans have always been like this.

What has actually changed is that we are now all exposed to a vastly increased flow of information. Much of it is not factual, but when it aligns with ideas or emotions within us, then we simply accept it without really asking if it is actually true (This mode of behaviour is termed confirmation bias).

Humans have always lived in a world that was awash with wacky conspiracy theories and misinformation, we have always been telling each other stories that come with an assurance of truth, and yet often are not true at all.

To give a specific example, in ancient Rome, Tacitus reports the street rumour that Nero himself started the great fire in AD 64. Others such as Suetonius later wrote this down as fact. In reality we know that Nero was not actually in Rome when the fire started, and we also know that when it happened, he rushed back, and then did as much as he could to help. Not only did he open up his palaces to help unfortunate citizens, but he personally went out himself without his bodyguard and helped look for survivors. Now don’t misunderstand me, I’m not suggesting that he was a nice guy who had a bit of bad press, he was also a real shit. The point is that the rumours that circulated at the time were not factual.

The real truth is that accidental fires were common in ancient Rome. We also know that fire started at the southeastern end of the Circus Maximus in shops selling flammable goods and so accident and not conspiracy is the most probable and reasonable explanation.

To give you another example, the general consensus amongst scholars is that much of the “history” within the old testament concerning King David is political myth and was specifically manufactured. Even today many believe it is all true, and yet there is no historical evidence that established any of it …

The authors and editors of Samuel and Chronicles did not aim to record history, but to promote David’s reign as inevitable and desirable, and for this reason there is little about David that is concrete and undisputed. The archaeological evidence indicates that in the 10th century, the time of David, Judah was sparsely inhabited and Jerusalem was no more than a small village

The observation that we are awash with myths is nothing new. Some are manufactured for political reasons and some emerge naturally because the pattern seeking engine between our ears draws them out of random events. Humans have been like this for a very long time. The discovery that vast swathes of the population support quite obnoxious individuals because they buy into political myths is also not new.

What is new is that we have access to a vast flow of new information. It may indeed amplify these myths, but it also punches a hole into the previously isolating social bubbles, and so creates an opportunity for those that are willing to pause and think critically to discard old myths and embrace better ideas.

In the pre-information age it is highly possible that Trump would win. Today our new myth-information age enables not only his rhetoric, but also his real thoughts and feelings to be amplified, and so while he may indeed have no substance and instead simply taps into the emotional turmoil that bubbles away out there, it also throws up stuff about him that would in all probability have remained buried. It is these snippets of his actual reality that will probably cost him the election.