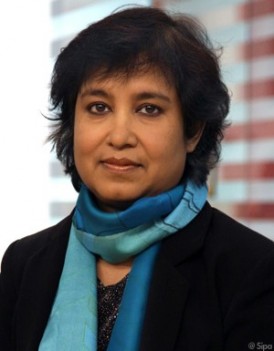 Taslima Nasrin is a Bangladeshi writer, poet, and also former Dr who has lived in exile in India since 1994 due to the threats she has faced. Unfortunately due to even more recent death threats specifically directed against her by the same group that has already brutally hacked to death 3 other secular writers in Bangladesh, she has now left India. She had been living in India only a few hundred miles from where those murders took place, and there have been credible reports that there were plans by the Islamists to cross the border, seek her out and murder her.

The news however is good, she has been relocated to the US by the US based NGO Center For Inquiry. They are asking for a bit of financial help with this, so if you are in a position to assist, they would appreciate it …

A champion of free expression needs your immediate help. Islamic radicals reportedly linked to al-Qaeda, the same violent extremists who claimed responsibility for the recent murders of freethought writers Avijit Roy, Washiqur Rahman, and Ananta Bijoy Das, have been threatening the life of Taslima Nasrin.

Taslima is a world-renowned secular activist and author, whose uncompromising advocacy of human rights and criticism of religion forced her into exile from her native Bangladesh in 1994. A physician by training, she has written innumerable books, articles, and poems, and she has been at the forefront of political activism for secularism, free expression, and equality. Since 2004 she has lived in India, but even there she has faced persecution and threats.

… We at the Center for Inquiry are doing all we can to keep her out of harm’s way. But we need your help.

We’re asking you to Donate Now so Taslima can remain safe in the United States. We will need to provide assistance with food, housing, and the means to get safely settled.

If we raise more than is needed for Taslima, we will use the remainder to establish an emergency fund to help assist other dissidents in similarly perilous situations.

Ed Brayton has more of the story of what has been happening here.

Taslima also has her own blog here.

Taslima’s story is also here in a Daily Mail article for a couple of weeks ago.

I am of course personally quite happy to know that Taslima is now safe and that the plans of those that wanted to murder her have been totally frustrated to the point of complete failure. My feelings are not simply abstractions, I’ve personally met Taslima and have been inspired by her refusal to bow to intimidation, and so I am thrilled to know that she is beyond the reach of those who seek to turn her into a human sacrifice to Allah.

Beyond that initial feeling there is also the observation that those who strive to silence voices such as hers through violence and murder have no counter arguments and instead all they have is empty meaningless dogma that both binds them in ignorance and blinds them to human compassion and empathy. That alone tells you all you really need to know about the degree of moral bankruptcy that has been gifted upon them by the “religion of peace”.