#Dilbert does office politics. Unfortunately, Scott Adams, the guy who draws the strip is not only a rather vocal Trump supporter, but he is also a science denier. 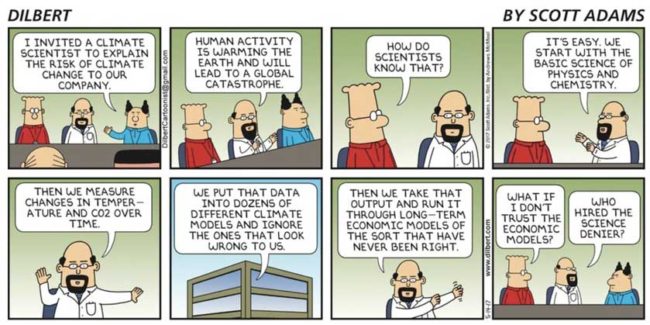 The first few panels are fine, its the last three in which we get the science denial punch.

If you are not familiar with Scott Adams then it might indeed be tempting to ponder the idea that perhaps the joke here is that he is mocking science denial, and hence that’s the joke.

Nope, he truly does personally take the stance that Climate models not accurate, and so his “joke” here is that literal belief – he is mocking the idea the climate science is science.

Not too long ago, last December to be precise, I was blogging about a rather bizarre “Challenge” that he had issued. In response to his challenge in which he asked for evidence, he rather successfully demonstrated a complete rejection of any evidence and verified that he had no real interest in a meaningful dialog. So yes, he really does take an anti-science stance, and its neither new, nor a surprise

The cartoon Climate Science guy is not just some random guy, I recognise him, it is Michael E Mann. Do you think that somebody should tell him?

No need, he already knows …

Honored to be featured (?) in Scott Adams ("Dilbert") expression of climate ignorance. Via @Pharyngula: https://t.co/v4hzBqbThC

… and for those that like cartoons, he also has a recommendation for a better cartoonist …

For those who prefer their climate-themed cartoons from a Pulitzer Prize-winning cartoonist, The #MadhouseEffect (https://t.co/M9YiCU86v6).

Incidentally, if you are curious about that book, then you can read about it within science writer Greg Laden’s review of it from last August. No, nobody is crossing my palm with silver for recommending it. I don’t do ads, and I don’t do sponsorship. If I recommend something, then I do so because I think it is both good, and because I think that you might possibly also like it.

Being a rather wealthy 59 year old white guy who lives safely within a rather privileged bubble, I guess it is not such a surprise to discover that he is.

He started out by claiming in 2015 that he would not endorse anybody for the 2016 election, but was at the same time rather vocal about his praise for Trump, and specifically commented on how persuasive he was.

He did at one point support Clinton, and openly claimed that this was because he felt he might be murdered by a Clinton supported if he did not do so. This (non) endorsement appeared at the bottom of his various posts ..

“Note: I endorsed Hillary Clinton – for my personal safety – because I live in California. It isn’t safe to be viewed as a Trump supporter where I live. My politics don’t align with either candidate, but backing Clinton reduces my odds of dying at the hands of my fellow citizens. (And yes, I am 100% serious. It just happens to be funny by coincidence.)”

Later, he discovered that Clinton was going to tax him because he was very wealthy, and so he quickly switched his support to the guy who would enable him to retain all his wealth.

Meanwhile, somebody has fixed the cartoon …

This one is even nicer. pic.twitter.com/kshI6n9tey

What is comical is deniers who say "we're just asking questions" then proceed to make claims w/o evidence, e.g. "you manipulate data!" https://t.co/jYxVV22QiY

In fairness, I do work quite a bit w/ climate model simulation results. But that doesn't negate the fact that he doesn't have a clue…

Somebody has also pointed out that Scott Adams tried out science denial a few weeks ago on his blog where his opening comment reads “I don’t know much about science, and even less about climate science” … er yes, I do believe that many of us wholeheartedly agree.

"I don't know much about science, and even less about climate science" ~@Dilbert_Dailyhttps://t.co/6ed3mZitq7

Chris Schrader pointed out that he had already responded to that posting. Its a nice rebuttal.

Adams tried out climate denial first in his blog some weeks ago and I tried to answer him thus: https://t.co/53P7dz6YJh https://t.co/wEfTj7FUjf