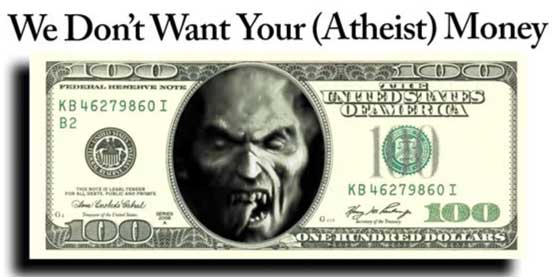 A few days ago I was writing about the Murrow Indian Children’s Home that rejected a donation because it was being offered by a non-religious person. I truly thought I was done, and that was the end of the story, but no, the saga continues to roll, and so here are a few more updates.

Matt, who had his donation rejected and then started a GoFundMe page to drown them in donations has issued a further update  …

Hello everyone. It appears the stubbornness of the Board of Trustees at the Murrow Indian Children’s Home has backfired for the last time. Yesterday I spoke with a representative at the Murrow Home via phone and I was told that they will refuse the donation of $5,106.47 whether I donate anonymously or through a local church. I even tried calling the electric company and the water company here in Muskogee to try and pay their bill(s) for them in the amount of $5,106.47 but those companies both said that I have to have their account number, which I do not have.
Therefore, it is with a very small amount of reluctance that I will now announce that we are donating all of the money to CampQuest Oklahoma.
I’m sure it comes as no shock to anyone in the world that religious greed has prevailed once again.
We tried.

In other words, they have made a decision to reject an anonymous donation even if it was made via a church.

Yes, as explained on the Friendly Atheist site …

Matt called the Children’s Home today to tell them he wanted to make the anonymous donation — not to get credit, but to make sure they weren’t just going to send the amount back to him as they did before.

He added that “if it would make them feel more comfortable, we can have Father Bob Wickizer from Grace Episcopal Church in Muskogee, OK bring the cashier’s check to them.”

After taking a few minutes to speak with the board of trustees, the staffer called him back with a message: The Children’s Home was still going to refuse his donation “based on their biblical principles.”

Even if it came from a pastor.

Clearly this is not about them having a policy in which they publish a list of donors and thus would need to credit a non-believer for making a donation, and is clearly about Matt’s lack of a religious belief.

I’m really scratching my head on this one, exactly what “biblical principle” is being breached here, I’d love to know?

Side note, for those not familiar with the term WWJD within the title of this posting, it is an acronym that stands for “What Would Jesus Do?”, so I am curious to grasp precisely how they square that circle.

Is there any way to donate?

If you are a non-believer, apparently not.

A Christian, Mr Hooes, started a GoFundMe for the same home with the thought that this was simply about those pesky atheists stirring things up for a bit of publicity. He laid out his thoughts as follows …

if the other group is so inclined to donate, just cut them a check. No strings attached, no need for recognition. But that is not your intention.

As Matt demonstrated, that was never the intent, and Mr Hooes also rapidly illustrated this. Many many non-believers very happily contributed on the understanding that it was to be a totally anonymous donation … 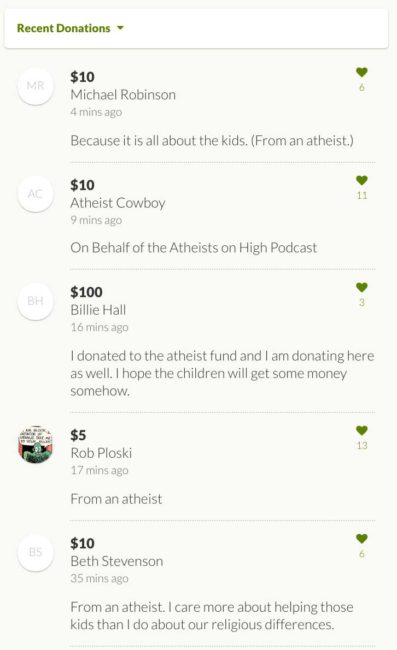 … then  within an hour of that starting to happen, Mr Hooes promptly shutdown his GoFundMe because, well clearly it had become seriously tainted with money from non-religious people and we just can’t have the aroma of un-santificied dollars corrupting the moral integrity of the money being donated by believers.

You can read about this bizarre twist in more detail on this posting by the Friendly Atheist.

American Baptist Home Mission Societies lies about all of this

The American Baptist Mission issued a statement of support. In their statement they claimed …

Murrow declined a gift of $100 from the Muskogee Atheist Community because the gift came with a requirement for advertising the donor’s name in a related program book.

… “It is critically important to recognize that the Muskogee Atheist Community’s insistence that Murrow accept a monetary gift in exchange for advertising the community in its printed materials—and then threatening to use its muscle to shame and embarrass Murrow—is blatant bullying. Murrow has not taken a stand against anyone or any cause,” says ABHMS Executive Director Dr. Jeffrey Haggray.

OK, a few thoughts on that claim …

I am quite frankly blown away by them rather blatantly lying about it all.

There is a Claim that their FB page has been trolled

The Christian Examiner has an article on all this. In it they claim this …

We can easily check this stuff, so let’s do exactly that.

Has the Murrow Indian Children’s Home Facebook page been shut down?

Nope, here it is.

Looking I can see they have received 28 on-line criticisms. I’m not convinced these are all “Atheists”, but rather people who are simply appalled that they turned down a donation of over $28,000.

As for trolling them … perhaps somebody should point out that Facebook was founded by, and is run by, Mark Zuckerberg, an atheist.

I guess the issue here is that they are overwhelmed with donations from within their community of believers. This then enables them to afford the luxury of turning away anything offered by those that do not align with their specific beliefs.

Oh wait, one of their staff posted this to FB yesterday … 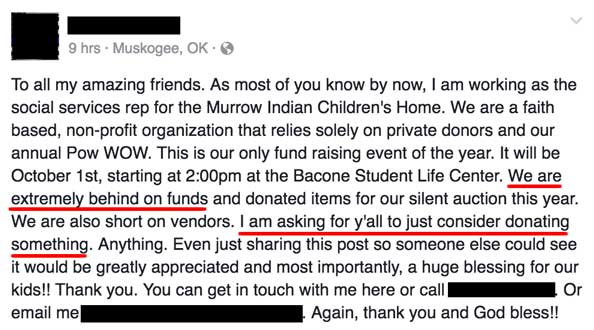 There are a few entertaining reactions floating about, for example one commenter under a posting makes the following observation that perhaps sums it up …

refusing a check delivered by a pastor because atheists donated the money? How could that go against “everything they stand for?” Even if the only thing they really stand for is spreading Christianity or self-aggrandizement — the welfare of the little children be damned

Others however pull no punches …

… they are trying to win the coveted “Stupidest christian sect of all time” award.

And also this story …

I’m reminded of that joke about a guy who was in the middle of a flood, and the rising water forced him onto his roof. And in this time, rescuers in a boat and a helicopter separately came to help, but the man refused, saying that his god will save him.

But the man drowned in the end. And in heaven he asked God why he didn’t help the man, and God said “I sent you a boat and a helicopter, what more did you need?!”

So how exactly does this work then, does the only acceptable money they use consist of cash that has been anointed with holy water?

Perhaps we should point out that all money, every single cent, has at one time or another passed through the hands of non-believers. If handling such tainted cash is indeed a burden that they are not willing to endure, then we can advise them that there are many other truly worthwhile charities out there that would be more than willing to happily relieve them of such a heavy burden.

What perhaps makes this truly bizarre is that this is not how most normal charities operate … ever. Almost everything ranging from small charity stores, all the way up to multi-national organisations such as The Red Cross, will happily accept donations from anybody. They know that some of those donating might indeed be quite vile people and perhaps donate to alleviate a guilty conscience, but that does not matter because they are then doing good things with every cent they are given, and that is what matters. Even the deeply religious charities such as the Salvation Army will happily accept each and every cent without any questions or filtering.

I do also wonder if somebody can perhaps get the Satanic Temple to offer the Murrow Indian Children’s Home a donation of $666 so that we can all watch their heads explode.

In the end, what truly matters here is the welfare of the kids, and nothing trumps that, not even the claimed “biblical principles”.