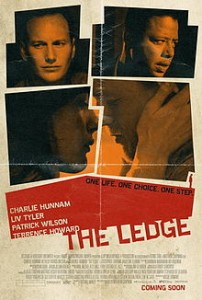 Hopefully most of you within the skeptical/atheist community are aware that Mathew Chapman’s latest movie “The Ledge” (starring Charlie Hunnam, Terrence Howard, Liv Tyler )  is very much one you should check out if you ever get the chance to. The film deals with an intellectual, personal, and ultimately fatal feud between an atheist and an evangelical Christian (least you wonder, the Atheist is the hero here, hence its a movie of interest to us all).

OK, it is just a movie, but the portrayal of an Atheist as the hero in a movie that has an A-list cast is new, and so this is a direct attack upon the public myths regarding non-belief. Will it make a different out there? You bet, I heard an interview in which Matthew Chapman, (the writer and director) recounted the story of a Christian who had a relative that was a non-believer and for that reason alone,  had not spoken for many years. Apparently after watching the movie, as the end credits were rolling, she was on the phone to reconcile.

I was curious to see how others had reacted to it, so I’ve been checking out the reviews on IMDB. As I write this there are currently 24 reviews there and the movie scores 7.3 out of 10 (You can check out the movie’s IMDB page by clicking here – to jump directly to the reviews, just click here).

Here are some extracts:

It’s not hard to put together a monster film. You throw one insane guy together with a hero, and add a car chase. The Ledge is nothing like this, and that’s why it’s so impressive.
…
Thus the central thesis of the film — that belief can go too far — is played out on a small stage. This is a drama of just 6 people, but the intricate explosions between them pull at the heartstrings far more effectively than a car chase in an action film would. We hear so much about the dangers of religion in big stories like 9-11, gay rights, and abortion rights. Here is a film about the dangerous of religion in the everyday, the dramas so commonplace that everyone who watches can find something in their own lives to compare it with.

As I walked in I was prepared to be bored, preached at, and left with a very predictable life-affirming message. Boy, was I ever wrong.

I saw a preview of The Ledge two months ago and instantly thought it is the beginning of a whole new genre of film that gets away from the cliché world of most films. It explores nuances of life, ethics, love and religion that are not easily classified. While it is a thriller, it is also much more. If you are not thinking about this movie for days or weeks after, you probably weren’t watching. I challenge you to put yourself into each of the characters and recognize how powerful world views can influence decisions and behavior.

The Ledge displays a psychological perspective of an atheist through its atmosphere, and that alone makes it unique and worth seeing.

I was lost in thought for days afterward.

Now that is all very encouraging and also very positive.

Some practical details, you can watch it via iTunes, on demand or online streaming. Details for all this are on the Movie’s official website (found here). There is also a list of theaters showing it there as well, along with the directors blog.

Finally a bit of Trivia:

1 thought on “IMDB reviews of “The Ledge””