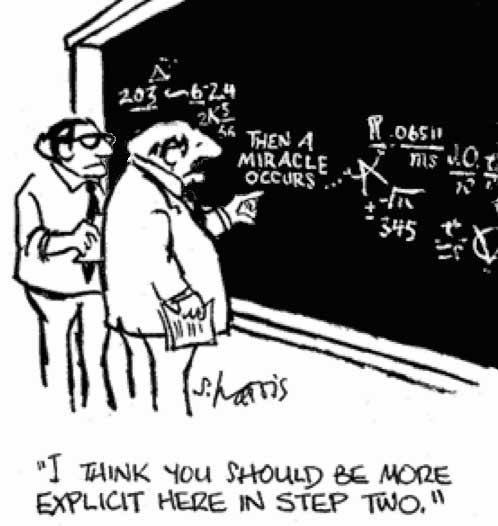 There is an article in the UK’s Guardian all about a myth. It is entitled …

Would you Adam and Eve it? Why creation story is at heart of a new spiritual divide

OK, let’s give you a quick summary of it. We live in a world where there are people who reject science based fact and instead embrace mythology as truth. What the article is doing is that it uses new polling data to make what appears to be an interesting point like this …

A YouGov poll, commissioned by Newman University in Birmingham, has found that 72% of atheists polled believe that someone who is religious would not accept evolutionary science. In fact, only 19% of religious respondents in the poll rejected Darwinian thinking in favour of a literal reading of the Book of Genesis.

In other words, the stance being taken is that it is those that do not believe that are in fact propagating a myth about those that are religious, and that generally religious people are pro-science individuals who do accept scientific conclusions, and do not reject the prevailing scientific consensus.

What it is suggesting is that the polling data verifies that the supposed conflict between an evidence based understanding of reality, and a traditional cultural non-evidential belief is itself a myth.

It all feels warm and cosy. Unfortunately there is just one ever so small tiny flaw. If you go and take a look at the data provided by the poll, then what you discover is that it does not backup what the article claims at all.

Slicing and Dicing the article

It would of course be very tempting to pull it all apart myself, but I don’t need to because others have already done a fine job. Coel Hellier, a Professor of Astrophysics at Keele University in the UK, has written up his take on it all where he dissects this incarnation of incandescent vapours and translucent surfaces (smoke and mirrors) …

This sounded highly dubious to me. Do British atheists really think that most Christians are Biblical literalists and that they have to be literalists to count as Christian? On digging further I find that the poll shows no such thing. Ms Pepinster has misrepresented it in order to malign atheists.

The survey in question was by YouGov. A press release by “Science and Religion: Exploring the Spectrum”, led by a team from Newman University who commissioned the survey, is here, while a 34-page summary report can be downloaded here. The press release also contains links to the actual data (note that part of the data on which Ms Pepinster based her article was not in the original press release, but was added later after I Tweeted to ask about it).

What Coel then does is to dig into the actual polling results from that survey and lays it all out so that you can see things as they are here. He then quite rightly observes …

In other words, the belief is one where the majority do accept evolution but still believe that it all happened by magic. He explains it like this …

He goes into a lot more detail, so if curious his full takedown is here.

Why Is the Guardian article misrepresenting things?

Liberal Christians would like nothing more than a general acceptance that their religious beliefs are entirely compatible with science. Thus they want to believe that the “war” between science and faith is caused purely by ignorant atheists misunderstanding religion. They want it accepted that (quoting Rowan Williams from the article) the “supposed war is just fiction”.

It’s not that simple. First, there is tension between evolutionary science and theistic belief. The fudge of “theistic evolution” is a half-baked compromise that rejects quite a bit of science and that would fall apart if properly examined. If you don’t accept that human minds, psychology, moral attitudes and social feelings are also products of Darwinian evolution (along with large environmental and social influences) then you are denying science.

Secondly, the tension between science and faith goes much deeper than acceptance of particular scientific findings, and is best illustrated by the words that Jesus supposedly said to Thomas: “Because you have seen me, you have believed; blessed are those who have not seen and yet have believed”.

The essence of it all is this.

There is a fundamental difference in the manner in which belief and science operate.

Within the religious sphere, doubt and skepticism is presented as a negative. Just believing on the basis of no evidence at all (faith) is very much encouraged and applauded as the definitive and highest virtue.

Science turns this around completely. Doubt and skepticism is the truly virtuous attribute, while just accepting ideas that have no evidence to back them up is viewed as a good reason for the rejection of those ideas.

If you want a truly robust understanding of reality then you can’t do both, there is no avoiding this.

The core religious claims conflict with our evidence based understanding of reality. Many who inherit a belief for cultural reasons will resolve the conflict by attempting to accept both. Fact based evolution is not a problem, but will then add the magic as well with “That is how God did it”, on the basis of no evidence at all for this claim.

The Guardian is generally a trustworthy source. This, as has been well illustrated in this instance, is not always true. That perhaps is true for any source and so verifying things by checking the sources is always a wise move.

Richard Feynman once read a report on beta-decay that had been written by experts. Unfortunately it was wrong and so he was led astray. After being burnt like that he later quipped …

Since then I never pay attention to anything by “experts”. I calculate everything myself.

When it comes to various claims, especially those that potentially change your understanding of what is going on, it is well worth checking the source.

1 thought on “Science vs Belief: Is this conflict a myth?”