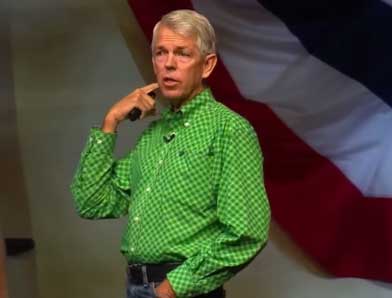 Sometimes you come across folks who feel they are truly entitled to a special privilege. Take for example Mr David Barton. The Friendly Atheist recounts this latest saga of absurdity on steroids …

Christian pseudo-historian David Barton gave a sermon last month at Calvary Chapel Salt Lake (Utah) in which he explained the bizarre conditions under which he’d debate an atheist.

I remember I got challenged to debate one time by the American Atheists Association [sic]. They called me — not they, but a news guy called — and said, hey, American Atheists Association wants to debate you. Will you debate ’em? And I said, “Well, here’s the ground rules. If I debate them, I get 92% of the time.”
He said, “That’s not fair!”
I said, “Well, wait a minute.” I said, “92% of the nation believes in God. 6% doesn’t. 2%’s undecided. Now, if I debate them and they get 50% of the time, they now get eight times more than what they’ve earned. They’ve earned 6% of the time. My side has 92%–I’m not gonna give away my 92% to go down to their 50%. And so that’s the way policy works in America, is the majority gets to rule.

This is utterly absurd and is clearly not the way debates work … ever … anywhere.

His claim that he was invited to debate by American Atheists is not true, they have confirmed that they have never invited him to debate. It is of course distinctly possible that some other group might have.

His claim that 92% of the US population believe in God is also not factual. If you check Pew Research it is closer to 70.6%. Take a closer look at that poll and you find that Mr Barton’s variation of belief, Evangelical, is only 25.4% so if he really did try to negotiate such absurd rules then he should only speak for 25.4% of the time.

Who Is Mr Barton?

You can read all about him here on Wikipedia. There we discover that concepts such as honesty and integrity are terms that he is not familiar with.

Why oh why is truth discarded and replaced with fiction?

Basically to emotionally manipulate people into supporting absurd political ideas that have no basis in fact. The end-game, the vision, is a very far-right one. If permitted to do so, he would like to see a Christian theocratic dictatorship established, and even put that bold claim in his book. He has argued that only Christians should hold political office and nobody else should.

Mr Barton might indeed argue against concepts such as the separation of church and state, but he is in reality a very good example of why maintaining it is vital. If that wall should crumble and people like Mr Bardon grasp the reigns of power (I’m looking at you Ted Cruz), then we will indeed enter a new dark age of intolerance and ignorance.

2 thoughts on “David Barton: I’ll Only Debate Atheists If I Get to Speak 92% of the Time”