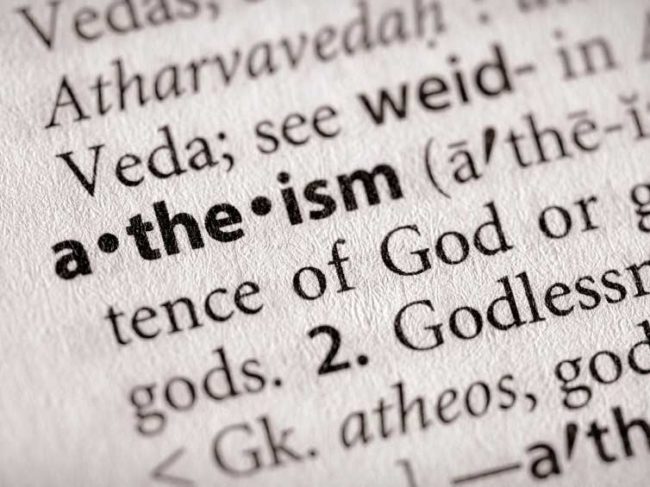 Over on the National Catholic Register Angelo Stagnaro rants for a bit on the claim that Atheist’s are vile evil people who did truly vile things. It is worth mulling over for a bit because it reveals how our use of language can and does enable some to fall into a bit of rather flawed thinking.

His article is entitled …”Atheist Myth: “No One Has Ever Killed in the Name of Atheism” and consists of seven points. So let’s examine each in turn.

Side note: My motivation here is not to simply craft a rebuttal to a rather daft rant, but to also think a bit about how we think about such topics, and how sometimes the words we use can trap us within a specific narrow and rather flawed way of viewing things.

1. This is a silly, if not also a thoroughly common, argument. If the negative actions of any and all theists reflect badly upon all theists, all forms of religion and all religionists then it follows that the negative actions of any and all atheists reflect badly upon all atheists, all forms of irreligion and all irreligionists. This logical fallacy is called “Guilt by Association.”

He is of course correct to make the observation that generalisations really do not work. “All Catholics are wicked evil people because <insert some Church history here>” or the more politically potent example might be “All Muslims are wicked evil people because <insert list of various recent events here>”. Generic associations do not work. Additionally, such generic terms often do not tell you very much at all. If you encounter people who claim to be Catholic then what do you now know? That they attend a specific type of a place of worship each Sunday … except many don’t. That they are opposed to the use of Birth control… except the vast majority in the US do happily use birth control. You can go around this loop for any very generic label and then fail to fit all who use such a term into a specific box because you will always find exceptions. All Muslims believe that Mohammed was the last and final prophet … except the ahmadiyya don’t.

The point here is that he is laying a foundation to establish that some atheists do kill in the name of atheism, but even that itself is a claim that is problematic for reasons that we shall get to.

2. Communism is definitely a religion as the Catholic Church has claimed for more than a century. It’s an atheistic religion.

Er … no, it is definitely not … and so right here is where his entire argument falls apart.

It  boils down to how you define the word “religion”. Words mean specific things and so if we use the traditional and commonly used definition (a particular system of faith and worship) then you would immediately understand that we are not talking about communism or any other political movement, but instead are referring to the practise of supernatural beliefs.

It is of course also common to use such terms as metaphors. If I said that “on-line gaming is the new religion” you would instantly understand that I was not actually claiming that on-line gaming was literally a religious belief, but instead would appreciate that I was pointing out that on-line gamers are very passionate and devoted to what they do. When somebody starts redefining words in a manner that conflicts with the commonly understood usage, then that becomes a red-flag to be wary of the argument being put forward.

We could more or less dismiss the rest because it is this foundational claim that everything else that follows clings to … but hey, since we are here, let’s push on and see what comes next.

3. Even if we were to ignore the obvious crimes against humanity that atheists involved in the global communist movement in the past century have committed, we can condemn all atheists and atheism simply by examining the one million dead at the hands of “rational,” “enlightened” atheist French Revolutionaries. … Vendean Martyrs …

So now he is claiming that atheism and the “French Revolutionaries” are the same. It is of course true that many of them did not believe, but that was a consequence of their political beliefs and not a motivational inspiration.

You simply can’t conflate the term “French Revolutionary” with all the humans who reject supernatural thinking. What is rather odd is that within his first point he attacks the very idea of generalising as “silly“, and yet here in his third point he proceeds to do exactly that. It should be rather obvious to most people that the term “French Revolutionary” describes those who were motivated by a very specific set of political ideas and participated within the upheaval in France during a very specific period of time. When you hear the term “French Revolutionary”, then most would immediately understand that, and grasp that you are talking about a political movement that led to the suppression of the feudal system, the emancipation of the individual, the greater division of landed property, the abolition of the privileges of noble birth, and the establishment of equality.

He makes a specific reference to what he terms the “Vendean Martyrs”, and that word usage in itself reveals a rather potent religious bias that is rooted within his specific Catholic beliefs. If curious to read about that specific period in French history then start with the Wikipedia page. It was in essence a political power struggle between feudalism, a corrupt church, and democracy.  It resulted in rather a lot of blood being spilt on all sides, and was not in any sense an evil atheist vs innocent catholic war as the author appears to be claiming.

4.  … we have more than sufficient proof that atheists killed in the name of atheism as in the case of the Soviet Union’s Society of the Militant Godless, Mao Zedong’s Red Guard, the Enlightenment’s Reign of Terror, Abimael Guzmán’s Shining Path, atheist Napoleon’s wars and Plutarco Elias Calles democide of Mexican Catholics during the Cristero Wars.

His “sufficient proof” is lacking, he cites nothing as evidence and just tosses the claim out.

He is quite determined to conflate politics with religion. What should be abundantly clear to most is that all of these movements were not motivated and inspired by a lack of a specific religious belief, but instead were political movements … the embracing of a set of very specific ideas … about how society should be organised and run. Clearly those involved did perceive organised religion as a corrupt keeper of the status quo, so they opposed it. The core issue in play was political power and influence. Since organised religion retained rather a lot of that, a power struggle was inevitable.

What we do learn is that embracing a specific set of ideas fanatically and passionately for either religious reasons or political reasons his historically never worked out very well … ever.

That was all just the shallow end of a rather bizarre claim. In his next point he basically claims that anything not catholic is an “atheist philosophy”.

One specific term of interest here is “atheist community“. People who reject supernatural beliefs, generally do so for the rather practical reason that those asserting such claims have no convincing evidence, hence they have not been persuaded. While they do tend to agree about the rejection of such claims, they will often not agree on anything else. Poll the non-religious on other topics and you will discover a vast diversity of thinking. In essence the word atheist is simply a way of grouping those who agree on the conclusion to just one question.

There is perhaps some sense of community for some. Within this century there has been a naturally selected bias towards evidence-based thinking, so often you will find common themes such as a love of science and the rejection of other forms nonsense such as anti-vaccine, but this is not universal. For example well-known atheist Bill Maher has a bit of a bling spot when it comes to vaccines.

However, to deploy the word atheist as a prefix to the word philosophy is flawed.

His entire list is rather bizarre … “capitalism … industrialization … consumerism” … are all apparently “atheistic philosophies”.

If you think his list above is weird, then read on, because it get’s ever weirder …

.. well yes, Catholicism claims to be the ultimate bastion of absolute morality, and yet has no basis for such a claim. Catholic “morality” is by our standards today not moral at all and is itself actually relative to how they define their belief. An example would be their anti-LGBT stance.

Sticking the word “radical” in front of the word “feminism” and then tagging it with a list of things does not establish any of it as factual. He is indeed rather fond of word soup.

“Law of Attraction.” (i.e., the deaths, including suicides, caused by Peter Popoff, Sylvia Browne and other gurus”) All of these atheistic philosophies

Popoff is a TV Evangelist who promotes a specific variation of religious belief and Browne was the well-known fake Psychic who built her entire career on a belief in life after death. These are not exactly credible examples of Atheists.

Can his argument become any weirder?

Actually, yes it can.

6. But even if we were to never mention any of the dark secret murders of the atheist community ever again, an important question remains begging to be begged: Why is it that no one has ever been helped anyone in the name of atheism? There has never been anyone who has ever given a crust of bread or a drop of water or a stitch of clothing to anyone in the name of atheism.

He is clearly from somewhere else and hence is entirely unfamiliar with non-religious charities and organisations such as Doctors Without Borders, Amnesty International, Age UK, UNICEF, Water Aid, Fairtrade, Children’s Rights Associations, etc.,.. there are literally thousands of examples.

Read a bit further and you discover that his go-to example of charity turns out to be Mother Teresa, an individual who left the poor to suffer in quite appalling conditions because suffering was deemed to be a virtue, and utilised the funds she gathered to promote fanatical Catholicism instead of building a decent hospital.

7. Further, the fact that many atheists are glib or gratified at the horror of mass murders committed by their fellow atheists goes a long way in proving they are mere contrarians. One can’t glibly disregard the suffering of others while ignoring the fact that others (i.e.,Catholics) are working towards alleviating suffering in the world and throughout it all, lying about their good works—that’s requires a special kind of evil which is hopefully extremely rare in this world.

… and his evidence for any of this is …. like the rest of his argument … nothing at all.

Atheism is a weird word

The overall fatal flaw within his entire argument is the word “atheist” itself. It is a distinctly odd term because it does something that is quite unique – it is a label that describes people who do not believe something.

Generally those that do not believe find other terms to describe the things that do motivate and inspire, for example skepticism, critical thinking, secularism, humanism, science, and much more. Not everybody ticks every box, but generally those without a religious belief often do tick many of those.

As for the entire argument being deployed by Mr Stagnaro, there is a concise linguistic technical term that can be deployed to sum it all up. That term is the word “Bullshit”.