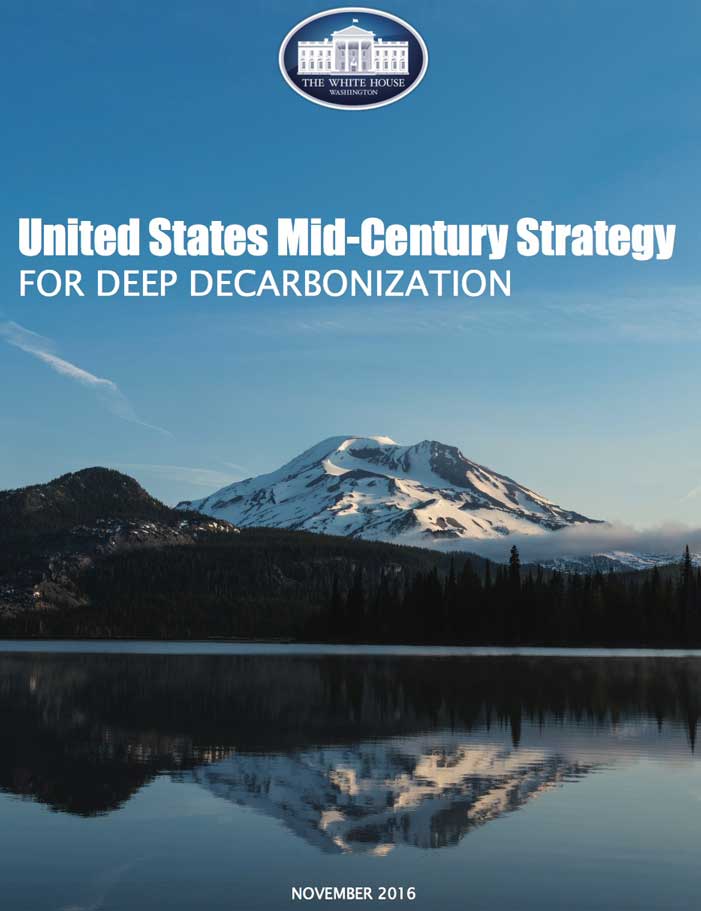 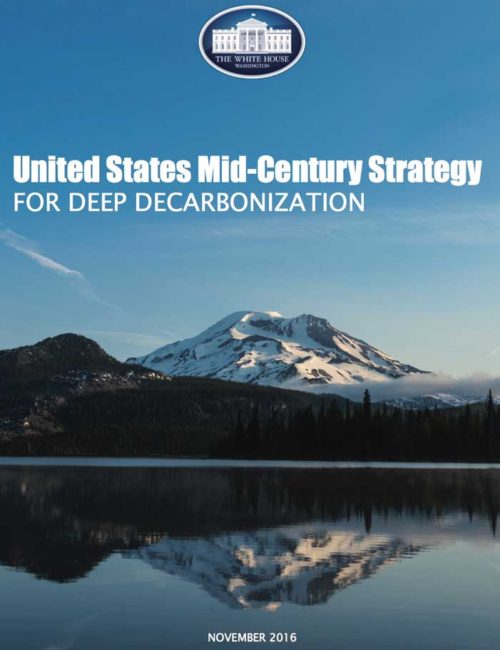 The White House has issued a rather detailed plan for how the US was going to actually tackle climate change. Science journalist and author Chris Mooney, writing within the Washington Post, explains that this 111 page document is …

a “mid century strategy” to massively slash U.S. carbon emissions by the year 2050, reducing them 80 percent “or more” below their 2005 levels. Just to give some sense of scale, the long-term impact of the plan would be larger than the effect of instantly taking all cars off U.S. roads.

You might be tempted to consider the issuance of this to be a political statement directed at Trump’s anti-science stance on the entire topic. Wrong,  it’s not. Instead, it was issued at this point in time to align with the UN’s annual climate change conference (COP22). That is currently taking place this week in Morocco. It is indeed an ambitious vision, and has been something that was being worked on long before the election.

One key message emerging from the conference is that the currently agreed reductions laid out by the Paris Agreement are wholly insufficient. This means that if they want to actually achieve the stated goals, much more will be needed. This US vision is potentially an example of how much more can and will be achieved.

Putting the Trump factor aside for a moment, the currently existing US commitment will see a potential 26% reduction of greenhouse gas emissions by about 2025. This new vision takes that to the next level and lays out how they will get to an 80% reduction (of 2005 emissions) by the middle of the century. To much applause, the US has completely ignored the Trump commitment to cancel the Paris agreement and has formally submitted the plan to the UN.

Where can I find this Plan?

You will find it here (via the whitehouse.gov website)

What is in it?

It consists of seven distinct sections. Of note is …

It is well written and very readable. To get your head around it all just read the executive summary at the beginning.

How would they achieve an 80% reduction?

They lay it out as follows …

This is a viable plan.

It is grounded in decades of research and analysis, draws heavily on peer-reviewed academic literature,  and it is informed by a wealth of studies on the decarbonization of energy systems and land sector carbon dynamics.

So what has been happening in Morocco then?

Chris describes it as follows …

Secretary of State John Kerry, freshly back from a trip to Antarctica to survey the ravages of climate change firsthand, spoke at the Marrakesh meeting. There, he told nervous negotiators that “no one should doubt the overwhelming majority of the citizens of the United States who know climate change is happening, and who are determined to keep our commitments that were made in Paris.”

[John Kerry wanted to see how Antarctica was changing. When he returned, the entire world had]

The remarks suggested an emerging tone of resoluteness in Marrakech, similar to remarks Tuesday by French President Francois Hollande that the Paris agreement is “irreversible.”

“Ironically, Trump’s threats to withdraw from the Paris agreement has created new resolve among nations here to make the Paris process succeed, with or without U.S. help,” said Paul Bledsoe, a former Clinton White House climate official who was attending the talks, by email.

What is this bioenergy that is in the plan?

Next you harvest them when grown and then plant more. Those that are harvested are then burned to generate energy, but in a manner then enables you to capture the carbon emitted. You then store that carbon and ensure it does not go back into the atmosphere.

This is described as “bioenergy with carbon capture and storage,” or BECCS.

You obviously need rather a lot of land, and you would also need to really scale up the process. Something akin to this has never been done on such a scale. The plan holds this up as one rather important part of achieving an overall reduction from 6 billion tons down to about 2 billion tons by 2050.

It all assumes that the existing plans achieve the 26% reduction, and that there would be a political will to do it.

Trump has pledged to roll back legislation that enables even that 26% reduction, and would be potentially unwilling to even consider BECCS.

However, Chris does make a few rather encouraging points …

Several climate policy experts in Marrakech nonetheless argued Wednesday that an ambitious goal for 2050, like the one unveiled by the administration, is not necessarily lost simply because of Trump’s election and professed policies.

“At least for the next 5 years, a lot of the things that need to happen are already being driven forward,” said David Waskow, who heads the international climate initiative at the World Resources Institute and spoke from Marrakech, citing existing tax credits for renewable energy and vehicle fuel efficiency standards in the U.S. “It’s not to say that everything that needs to be done now is going to be done but there’s some drivers that take us in the right direction, and also the market forces.”

“While four years will influence the trajectory, it will not define it,” added Mariana Panuncio-Feldman, senior director of international climate cooperation at the World Wildlife Fund, and also in Marrakech. “The US’s ability to address climate change doesn’t rest solely with the White House – we also need continued cuts from the corporate sector and at the sub-national level.”

While we simply cannot avoid the degree of uncertainty that now exists, John Kerry did himself offer some interesting observations …

“While I can’t stand here and speculate about what policies our president-elect will pursue, I will tell you this:  In the time that I have spent in public life, one of the things I have learned is that some issues look a little bit different when you’re actually in office compared to when you’re on the campaign trail,”

Indeed yes, clearly much of what was said during the campaign is already being rowed back rapidly.

There is also the rather obvious observation that new technology such as BECCS would create many new jobs. Additionally, there is also a financial and potential political incentive for him to actually do it and then claim job-creation credit. Trump might indeed also have been talking about getting back into coal in a big way, but once again coal is dying due to market forces and not because of a political decision.

Now we have on the table an ambitious achievable vision that has a robust evidence-based basis for its viability. Trump has no real substance or detail for any of his proposals.  Much of it is simply unachievable emotional rhetoric. The vast majority know that Climate Change is real and so perhaps the next four years could at worst stall some aspects. There would also be a considerable degree of resistance and resilience to current plans. I remain confident that some states, such as California will, continue to pursue ambitious carbon reduction initiatives. They will quite happily ignore any attempts at derailment by Trump, and that is perhaps the best way forward.

1 thought on “Climate Change: we now know the US plan for deep decarbonisation #climate #cop22”