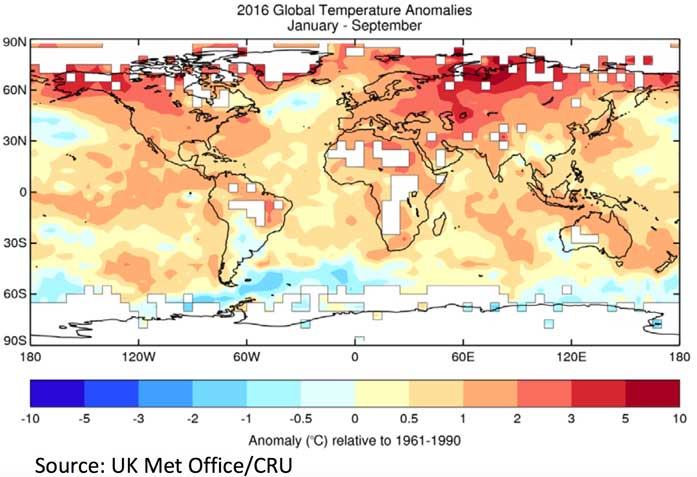 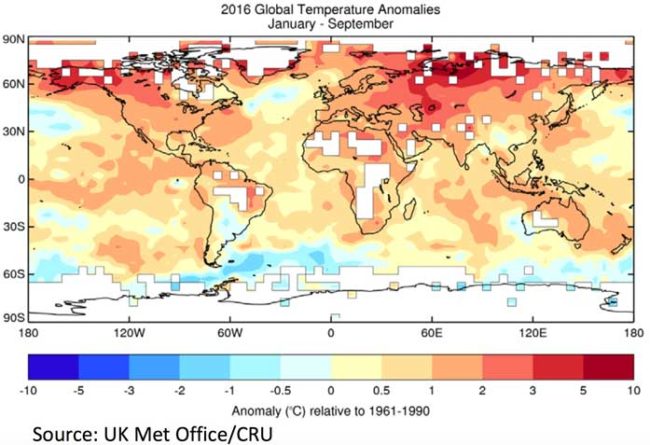 The World Meteorological Organisation is an intergovernmental NGO with a membership of 191 Member States and Territories. It was founded in 1873. Well OK, that’s a tad misleading. It was originally known as the International Meteorological Organization (IMO), and was re-badged with its current name in 1950. Their remit is to be the UN’s specialist for all things weather and climate related.

So the news here is this. They have just issued a Provisional Statement on the Status of the Global Climate in 2016.

This has been issued now as input for the United Nations Climate Change conference that is taking place in Marrakech, Morocco (COP22). A final statement on 2016 will be released in early 2017.

Here are a few key highlights.

Key message: 2016 is on track to be the hottest year on record.

Global temperatures for January to September 2016 were approximately 1.2°C above pre-industrial levels … 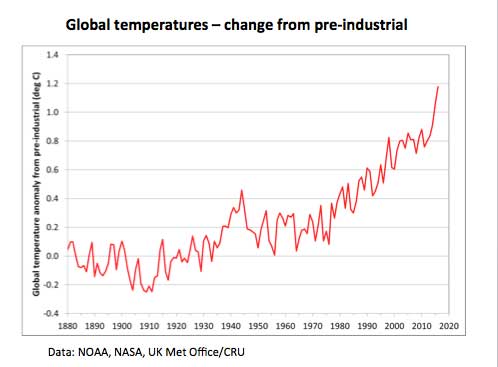 Temperatures were above normal over most ocean areas. This contributed to significant coral bleaching and disruption of marine ecosystems …

Global sea levels rose about 15 millimetres between November 2014 and February 2016 as a result of El Niño, well above the post-1993 trend of 3 to 3.5 mm per year, with the early 2016 values reaching new record highs.

Actually it is not just carbon dioxide. All the greenhouse gases are relentlessly increasing each and every year. They illustrate this within the report itself with the following charts … 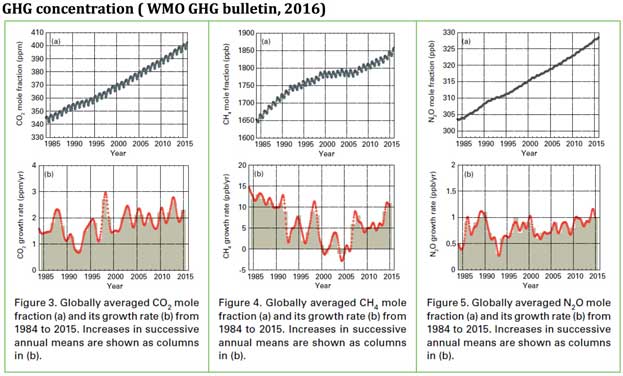 On the left we have CO2, (Carbon Dioxide). In the middle we have CH4 (Methane). Finally, on the right we have N2O (Nitrous oxide).

Arctic sea ice extent was well below normal throughout the year …

After several years of well-above-normal values, Antarctic sea ice extent fell to near normal by the start of 2016. It reached a seasonal maximum nearly a month earlier than usual. It was still well below normal as of the end of October.

Summer melting on the Greenland ice sheet was substantially above the 1990-2013 average, with especially strong melting in July, but was less than in the record melting year of 2012.

This last section is interesting. Here they spell out the consequences …

Annual and long-term changes in the climate system can aggravate social, humanitarian and environmental pressure. According to International Organisation for Migration, population migration is expected to increase as a result of more frequent and potentially more intense weather-related disasters, competition and conflict over shrinking resources, and rising sea levels rendering coastal and low lying zones uninhabitable.

According to United Nations High Commissioner for Refugees), in 2015 there were 19.2 million new displacements associated with weather, water, climate and geophysical hazards in 113 countries, more than twice as many as for conflict and violence. Of these, weather-related hazards triggered 14.7 million displacements. South and East Asia dominated in terms of the highest absolute figures, but no region of the world was unaffected. Equivalent data for 2016 are not yet available.

Extreme weather and climate related events influenced by the strong El-Niño in 2015/2016 had significant negative impacts on agriculture and food security. More than 60 million people around the world were affected by these events, according to the Food and Agriculture Organization.

Their information on humanitarian and environmental impacts was provided by the UN High Commissioner for Refugees, the International Organization for Migration, the World Food Programme, the Food and Agriculture Organization of the United Nations and the UN Environment Programme.

The not exactly politically-correct bottom line here is that doing nothing, the Trump option, would mean that we are basically F**ked.