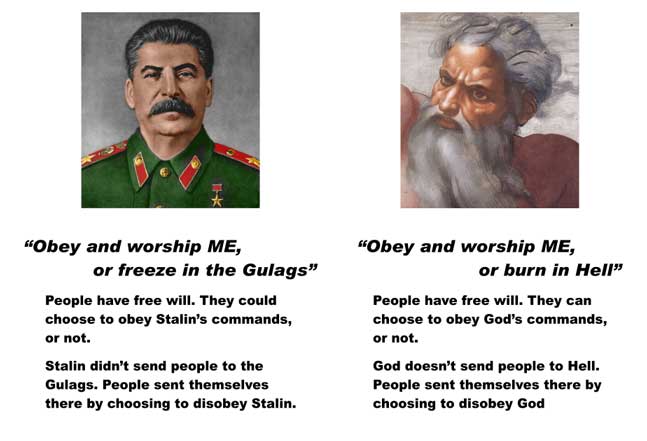 Once again this old chestnut pops up. Ray Comfort, a well-known evangelist has suggested that those that do not embrace myths as fact are inherently evil as follows …

On Tuesday’s episode of “Janet Mefferd Today,” evangelist Ray Comfort said that atheists can’t be trusted in politics or other positions of authority because they have no “moral high ground.”

After Mefferd claimed that “we don’t have any atheist members of Congress and we’ve never had an atheist president,” Comfort cited the crimes of various communist dictators to claim that atheists should never be given political power.

Yep, he is indeed not kidding.

It is of course true that Stalin, Mao and Pol Pot were not religious, but the fact that they did not embrace a specific religious belief does not explain their behaviour, nor does it justify Mr Comfort claiming that non-belief was the root cause.

Not sure what I’m getting at?

I’m sure you can think of lots more.

So what actually drove them?

What is abundantly obvious is that they were all gripped by a deep fanatical political belief, and it was that specific belief that motivated and inspired them to act in a truly abhorrent way with rather dire consequences. At a psychological level it can also be argued that a complete lack of empathy strongly points towards them being psychopaths.

The essence of Mr Comfort’s claim is that unless you embrace his specific beliefs, then you have no moral ground to stand upon, hence people who reject his belief are inherently wicked evil individuals.

The flaw here is that this is demonstrably not a factual claim. If we were to consider the morality outlined within the ultimate source of his belief, the bible, we discover not only a pro-slavery text that gives you explicit guidance on whom you may enslave, and also on how to beat your slave, but it also is a saga of genocide being carried out on the direct orders of his deity on a (if you will forgive the phrase) Biblical scale. Mr Comfort would of course quite rightly reject the notion of both slavery and also genocide, but not because of his belief, instead it is despite his belief which very robustly endorses both as jolly good ideas.

We can also turn this coin over and examine it from the other side. Do we have bands of atheists roving across the countryside raping and pillaging?

That might be a tad subjective, so let’s make it a bit more objective. We know the percentage of those in the US that do not believe is roughly 1 in 5, but a far smaller percentage would specifically use the label “Atheist”, roughly 3.1% so let’s use that. If the assertion, that Atheists, those who specifically use that label and not just those that do not believe, have no morality, then we should observe a high proportion of Atheists in prison. So how many of those in prison are Atheists, is it more than the 3.1% or less?

If his hypothesis was correct, then we could predict that it would be far higher. It turns out that it is far less, and is only 0.1%.

Mr Comfort is an apologist for a belief that is fast shrinking, hence would like to manipulate you into embracing myths as fact by suggesting that if you do not believe things that have no demonstrable evidence then you are akin to Stalin or Pol Pot, and that quite frankly is bizarre.

If you find that last statement unbelievable, then don’t take my word for it, instead you can read a well-cited paper that verifies this to be the case using solid data.

1 thought on “Claim: “Atheists have caused 110 million deaths in the last hundred years””