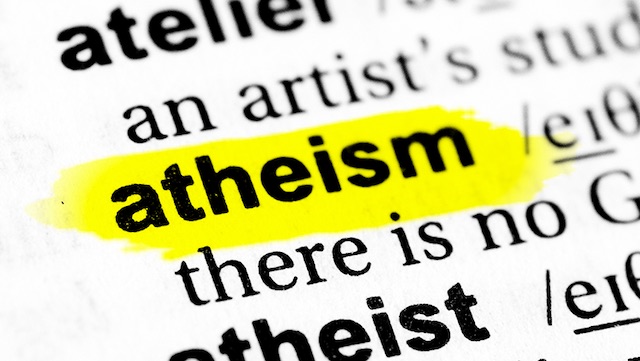 Dawn, an English Language Newspaper published in Pakistan, has an amusing little article titled “A New Religion”. The author is arguing that atheism, not having a religious belief, is a new religion.

Well yes, I’m still in a holiday mood, so I’m amusing myself by chewing over this for a bit and pulling it apart.

A couple of preliminary thoughts

First a few basics. Before we dive in and have a bit of fun, I better lay a bit of a foundation. As I’m sure you are aware, Atheism simply relates to one question alone – “Is there a God?”. If you don’t believe there is then you are an atheist. If you do believe, then you are a theist. That’s it, that is the entire scope. It really is that simple.

Related to this is a rather important principle called the “burden of proof“. If you are presented with a claim for something, anything at all, it need not be a religious, then it is not your responsibility to debunk it. If the person making the claim can’t produce evidence, then you should not believe it. To put that in simply terms – that which is asserted without evidence can be dismissed without evidence. (You earn bonus points if you recognise that quote).

The author opens with the observation that when well-known Atheist, Antony Flew, announced his rejection of Atheism in 2004 he was criticised by some prominent atheists.

He is often cited for his change of mind by theists. Dig into it all and what you discover is that it is not quite as is often claimed. Flew shifted from being an Atheist to being a Deist and not a Theist. That’s a rather important distinction that many theists often brush over.

It has been argued that flew was senile and that his advanced age muddled his thinking. For an insight into the story related to what happened, you can refer to a posting I wrote about five years ago on the topic.

To get back on topic – something is true if there is evidence to support it, and not because somebody changed their mind about something. When it comes to religion, people come and go. Some stop believing and some start believing. It can be for good reasons or bad reasons. People changing their mind about something does not establish what is actually true. We do not get to pick reality by popular vote.

Atheism as a Religion

The author leaps from Flew directly into this claim …

It can be argued that atheism, in its various manifestations today, has evolved into a ‘religion’.

… and his “evidence” for this is to cite just one philosopher from Yale University.

So to answer his observation of “It can be argued“, I’m not exactly convinced citing one guy means that he has successfully made such an argument. I’m also left wondering what these “Various manifestations” of atheism are that he makes reference to? I quite honestly have no idea, he does not give any examples.

He quickly leaps on into this …

What are these atheist beliefs that are not supported by any evidence? Again nothing is cited, I have honestly no idea what he has in mind.

Claim: “Support groups” are apparently similar to those associated with religion. That’s about as rational as claiming that joining a football club and playing matches is akin to attending a religious service because both require a bit of organisation and involve groups of people.

Claim: Non-religious ‘invocations’ are apparently an example of atheism operating like a religion …

Even though atheists claim they do not believe there is a higher power which humans can pray to in times of need or otherwise, they nonetheless want the ability to ‘pray’ just like religious people do. It is not clear to whom they want to address their prayers. Their only purpose appears to be making atheism more palatable to people who may feel the need to pray.

To make that assertion is to really not understand what is going on. Secular invocations are generally motivated by people who wish to push for the complete separation of church and state, and so turn up to do non-religious invocations to force the issue, and not because they wish to manifest the rise of a non-religious religion.

Side Note: A very successfull play here is for “Satanists” who don’t actually believe anything supernatural, to turn up to do an invocation. It’s a checkmate move that usually motivates a serious rethink about starting state sessions with an invocation. Either you open it up to all, or simply keep religion out and separate. If you think all of it is silly and does not really matter, then you are probably not familiar with much human history. When one religion gets a foot in the door and dominates a state, the result has never ever been a happy ending. We always reap a harvest of intolerance and suppression of anything and everything else.

Next up is the observation that those that do not believe are very diverse.

What can one say to that except “Duh!”. The fact that people might agree on one question “Is there a God?” need not imply that they agree on anything else at all. What is truly weird about this argument is that it quite successfully argues against his claim that non-belief is a religion.

Science and Religion in Harmony

Next up is this claim …

Throughout history, science and religion lived in harmony.

… and to back this claim up he points out that many scientists were also religious. While it is true that many scientists were religious, history is littered with examples that very much demonstrate that this claim is simply not true. Galileo being locked up and put on trial as a Heretic for daring to suggest that the Earth revolved around the sun is a well-known example.

However, since the author is writing in a Pakistani published outlet, an Islamic example is perhaps more appropriate. There have been times when science thrived within the Islamic world, but with the rise of the power of clerics that changed. We have the demolition of Taqi al-Din’s great Constantinople observatory in Galata. This was… “comparable in its technical equipment and its specialist personnel with that of his celebrated contemporary, the Danish astronomer Tycho Brahe.” Brahe’s observatory opened the way to a vast new development of astronomical science, Taqi al-Din’s was demolished by a squad of religious fanatics.

Er no … history tells us a rather different story. When religion grabs the leavers of political power, science is suppressed.

Today we face a very strong anti-science push from religion – climate change is a myth because God would never let it happen, evolution is a lie, etc…. This is all a dismissal of very solid robust empirical objective data.

Even if he was right, which he is clearly not, I have honestly no idea how it supports his central argument that non-belief is a religion.

Over the last few decades, however, atheists in science have sought to assert their authority by discouraging others from questioning their beliefs, similar to the ways many religious zealots have done historically.

His example to back this claim up is that David Gelerntery was critiqued because he believes in Creationism.

To be honest, Gelerntery is generally a bit of an anti-science twit. Religion or lack of it is not the issue. He is a Trump supporter who rejects all of modern evolutionary biology and also all the science behind climate change. Criticism of him is not an example of an Atheist Religion asserting itself, nor is it even a free speech issue. If Mr Gelerntery wishes to propose an alternative scientific view then all he needs to do is to publish evidence within a credible scientific journal. In the absence of that he will instead face criticism.

What exactly does criticism of Mr Gelerntery have to do with the claim in the Dawn article that non-belief is religion?

Absolutely nothing at all.

Did the dawn article persuade me of anything?

Perhaps yes. I confess that the degree of incoherence is quite impressive.

The author tosses out an almost random stream of sound bites followed by a series of words that don’t actually define what he means by terms such as the “Various manifestations” of atheism or “Atheist Beliefs“, nor does he offer any support for the claims on offer.

For those that lean a specific way it will simply push a few preexisting emotional buttons. Anybody willing to step back and think critically about it will be left scratching their head and perhaps even tittering in befuddled amusement.

Personally, I’m quite frankly astonished that anybody would be willing to write such an article without even one twinge of embarrassment.