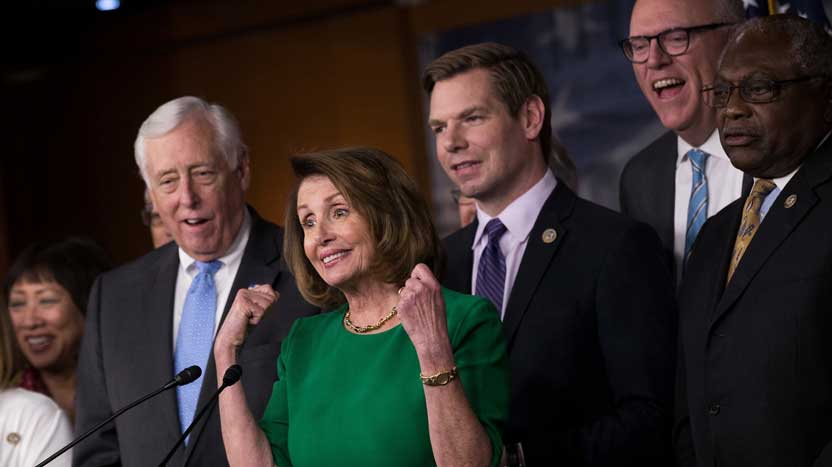 There is perhaps one good aspect that can indeed be attributed to Trump. He has been a very positive source of inspiration and motivation for many, not by design, but by just being himself. Basically the field of Democratic candidates for election in 2018 is fast filling up with young dynamic non-traditional people who would not normally consider running for office.

Let’s take a quick scan across the media to see what is happening.

As Mr Murphy writes, he focuses upon the observation that in addition to the usual collection of state legislators, business owners, and government officials, some of those that have stepped into the arena are scientists …

But the candidates also include a volcanologist who’s worried that her favorite research spot will be opened up for development; an aerospace engineer who’s running against the climate-denying head of the House Science Committee; a pediatrician who spends part of the year treating leprosy patients in Vietnam; and a physicist who worries what budget cuts would mean to the federal research facility where she spent her career.

All told, more than a dozen Democratic candidates with science backgrounds have announced their candidacies for Congress or are expected to in the coming months. The boomlet of STEM-based candidates amounts to a minor seismic event in a community where politics and research have traditionally gone together like sodium and water. Trump has been in office just six months, but he’s already done something remarkable—he’s gotten scientists to run for office.

Where are they coming from?

A new group called 314 Action that was started by Shaughnessy Naughton, a breast cancer researcher from Pennsylvania, is the source for many. Their mission is this …

We are members of the STEM community, grassroots supporters, and political activists who believe in science.

We are committed to electing more STEM candidates to office, advocating for evidence-based policy solutions to issues like climate change, and fighting the Trump administration’s attacks on science.

If you want to help bring science, fact and reason back to government, join us today.

If you are wondering about the name, 314 are the first three digits of Pi. So far about 6,000 have reached out to the group looking for guidance on running for federal, state, and local offices.

“Traditionally the attitude has been that science is above politics, and therefore scientists shouldn’t get involved in politics, and what that ignores is the fact that politicians are unashamed to meddle in science,” says Naughton. “The way we push back against that is to hold a seat at the table.”

The ranks of scientists in Congress have been thin in recent years. Rep. Bill Foster (D-Ill.) was a high-energy particle physicist at Fermi National Laboratory in the district he now represents. Until recently the dean of the bunch was Democratic Rep. Rush Holt of New Jersey, an astrophysicist who retired in 2014 and now serves as CEO of the American Association for the Advancement of Science. The only STEM field that’s well represented in Congress is medicine; there are 14 physicians between the House and the Senate, but most are Republicans who have shown more of a commitment to conservative dogma than scientific best practices. (Former Georgia Republican Rep. Paul Broun, a doctor, infamously referred to evolutionary biology as a lie “from the pit of hell.”)

… so yes, this alone may indeed be a potential game changer. But this is not the only new twist to everything, there is more.

2018 is still very far away in time, yet already, as is highlighted by Mr Thompson within his article, the field is rapidly filling up …

Already 408 Democrats have thrown their hats into the ring, a 58 percent increase over the 259 who had declared by this point in the run-up to the 2014 midterms. And several hundred more candidates are likely to join races across the country as the Democratic Party and multiple outside progressive groups recruit their own candidates. This tsunami of Democratic challengers will likely make it more difficult for President Donald Trump to pass his legislative agenda as members of Congress — Republicans and Democrats alike — will be wary of casting votes that provide ammo to progressive Democratic challengers.

Contrary to fears among some liberals that the anti-Trump resistance movement would start and stop with marches and memes, the surge of energy and potential candidates is letting dispirited Democrats dare to believe they could win the 24 seats they need to reclaim the House majority for the first time since 2010.

Where are they all coming from?

A liberal group called Brand New Congress is recruiting and training dozens. You can see their list of candidates here and they are indeed non-traditional fresh and inspirational. They hope to be able to ramp up to as many as 200 candidates.

Another group called Emily’s List is doing something similar. They are a progressive women’s group and are also actively recruiting candidates.

Normally, DCCC recruiters must fly across the country for several months and camp out in swing districts interviewing and prodding “good profile” candidates to run. But the DCCC has been inundated with what they say are very strong recruits from districts across the country, including traditional Republican strongholds.

At least 140 new Democrats have already begun their campaigns since Trump’s inauguration, many in places where Democrats aren’t usually expected to compete. Some of them are people who have run previously and lost, but the majority are political novices, many of whom emerged from newly minted anti-Trump groups. Many also do not fit the Democratic Party’s typical focus-grouped profile for recruitment.

They include several 27-year-olds, a former writer for The Onion, a 34-year-old Ph.D. student whose campaign staff is made up mostly of friends from Semester at Sea

What is fascinating about many of these new candidates is that they represent something different. Not only do they dislike Trump, but they also distrust the Democratic Party establishment. In many respects, that is indeed a vote winner.

Something different really is starting to happen, many are no longer willing to trust the established parties to field candidates that represent their interests, and so they are motivated to go out and be the better alternative. Here is a quote that illustrates that point from one candidate …

Mr Kilgore suggests that the surge of candidates in 2018 has the potential to transform it into a wave election (one where there is a large swing in votes and congressional seats for one party). He is not just speculating, but is looking at the statistics – If you have enough candidates running and the president is unpopular, then it becomes a distinct possibility …

A new study of campaign-finance filings from the Brookings Institution suggests Democrats are running for the House in unprecedented numbers: There were 78 early Republican challengers who had raised at least $5,000, which presaged the wave election that gave the GOP majority control in 2010. Democrats have 209. And these candidates are spread across the map, too: In 2009, the Republicans had mustered 50 legitimate candidates to challenge Democratic incumbents. The Democrats have doubled that.

I should perhaps add a note of caution. This surge in candidates does not make a wave inevitable, instead it simply becomes viable and possible.

Polls continue to show that the party is well ahead of Republicans on the “generic ballot” — the term for when pollsters ask voters which party they would like to win the House of Representatives in the next election, or which party’s House candidate they would likely vote for.

Again the mandatory note of caution: the election is still a long time away, 15 months at this point, so tempting as it might be to get excited, a great deal has yet to unfold. However, it is of course still worth noting that the President’s party always tends to lose seats in the midterm elections.

Meanwhile, if you want to track who is standing, ballotpedia.org will be maintaining a list.

To give you a quick taste of what is coming, here is a new campaign video. It is the Congressional campaign announcement video for retired Marine Lt. Colonel Amy McGrath (D) in Kentucky’s Sixth Congressional District. For more on Amy and her campaign, visit her website at http://www.AmyMcGrathforCongress.com

This was published yesterday and has already been viewed 222,000 times, if you click and watch, then you will see why it is quite rightly going viral. Even the observation that campaign videos for 2018 going viral on the internet should be a loud clear klaxon announcing that 2018 has the potential to be a game changer.