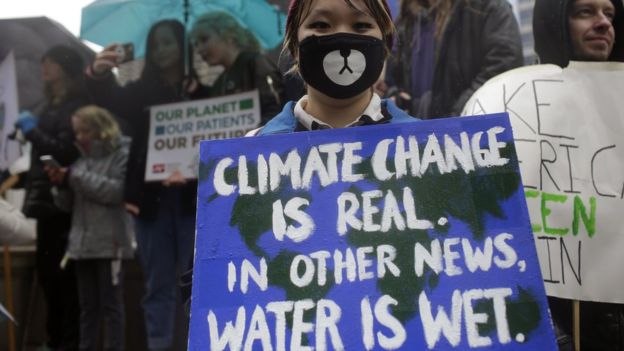 When it coms to all things Trump, I keep grasping for the “Nobody would do something that stupid” thought, and yet time after time he does something that completely resets such expectations. The announcement that the US will withdraw from the Paris Agreement is a classic example of just that, and so his unofficial title of Idiot-In-Chief has been well earned.

If you check the reasons he articulated as justification, then it should be no great surprise that almost everything he claims is wholly and completely wrong. You can check the precise details here. Basically in summary …

Yale professor Kenneth Gillingham said the NERA model tends to result in higher costs than other economic models. The study assumes certain hypothetical regulations, but “one could easily model other actions with much lower costs,” and it also ignores the benefits of reducing greenhouse gas emissions, like avoiding the negative effects of climate change..

“China will be allowed to build hundreds of additional coal plants. So, we can’t build the plants, but they can, according to this agreement.” – That is completely gold plated BS. The Paris Agreement is not about dictating who can or cannot build coal plants. It simply asks nations to commit to reducing their carbon footprint. How any nation achieves that is left to each nation to work out. This is what is actually happening …

Between the effects of an economic slowdown and an effort to move toward less-polluting sources, China has cut its use of coal three years in a row.

… China has promised that by 2030, it would reduce the carbon intensity of its economy by 60–65 percent below 2005 levels, and increase the share of non-fossil energy to around 20 percent.

“Even if the Paris Agreement were implemented in full, with total compliance from all nations, it is estimated it would only produce a two-tenths of one degree — think of that; this much — Celsius reduction in global temperature by the year 2100. Tiny, tiny amount.” – Side Note: Did Mr Tiny Hands really use the term “Tiny Tiny”?

In this case the statistic is correct, but context matters. The Paris Agreement is not just about the current international commitments, it is also a framework that enables those commitments to be continuously ramped up every five years.

While that level of growth was common between 1948 and 2005, it hasn’t happened since — and economists we checked with recently were skeptical that it could happen with any consistency in the near future.

… Economic growth, economists say, stems from two major factors: population growth and improvements in productivity. But neither of these factors are well positioned to drive 3 percent or 4 percent growth, they say.

India, in ratifying the agreement on October 2, 2016, said it would follow a path of low carbon commitment in tandem with its national laws and development agenda, including eradication of poverty. India also committed to reduce emissions 33 to 35 percent of 2005 levels by 2030.

How has Business Reacted?

Very negatively. The BBC has all the details …

Spoiler alert, the coal industry is pretty happy. But apart from that, there has been almost universal criticism from big business.

Tesla chief executive Elon Musk and Walt Disney boss Robert Iger have quit their advisory positions in the White House as a result.

Am departing presidential councils. Climate change is real. Leaving Paris is not good for America or the world.

As a matter of principle, I've resigned from the President's Council over the #ParisAgreement withdrawal.

Decision to withdraw from the #ParisAgreeement was wrong for our planet. Apple is committed to fight climate change and we will never waver.

Today's decision is a setback for the environment and for the U.S.'s leadership position in the world. #ParisAgreement

Apart from the support of his climate change denying GOP supporters who are completely and utterly decoupled from reality and consider evidence-based science to be a liberal conspiracy, the criticism of this decision has been almost universal. There is unity in the opposition to this …

#ParisAgreement, a historic treaty signed by 194 & ratified by 147 counties, cannot be renegotiated based on the request of a single Party. https://t.co/9vmbmzriJL

Statement on the US' withdrawal from the Paris climate agreements. #parisagreementhttps://t.co/T4XOjWZW0Q

Is there popular support in the US for this?

In essence, no, not even amongst Republicans …

In a survey of registered voters taken just weeks after the 2016 election, 69 percent said that the United States should participate in the agreement. This figure included 86 percent of Democrats, 61 percent of Independents, and 51 percent of Republicans. By a margin of 40 to 34 percent, even a plurality of self-described conservative Republicans backed the agreement.

What exactly does leaving the Paris Agreement mean?

The Paris Agreement is not simply some old-boys club that you can simply resign from and then walk away, but rather is a legally binding commitment that has entered into force on 4th November 2016. Formal withdrawal is of course an option, but the process for doing so takes four years. The Trump decision to formally pull the US out, means very little. The US remains part of it for four years and would still be subject to legally binding international commitments. If the US simply ignores those commitments, then it will be in breach of international law.

There are other things he cares about, such as trade and terrorism. Tackling those involves gaining cooperation on the international stage. If he fails to honour existing agreements, then he will in turn find that he gets no international cooperation. The global diplomatic backlash will be massive.