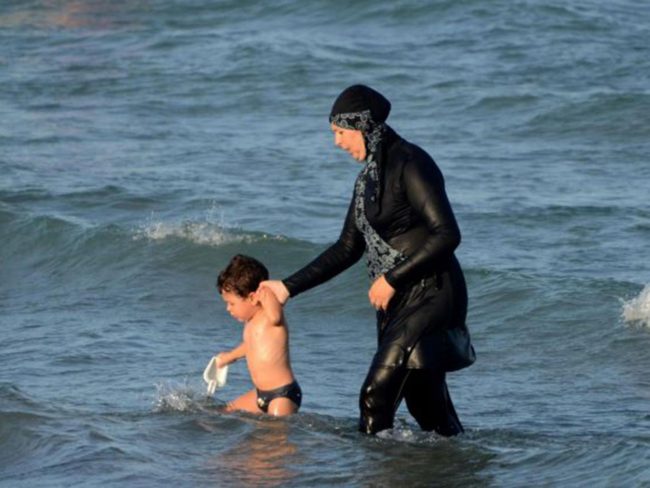 Over in France the concepts of Liberté, égalité, fraternité, apparently only applies to those that dress correctly …

The UK’s Independent reports the latest move as follows …

Fines have been imposed on women wearing burkinis in the southern French town of Cannes.

A ban on the swimwear – popular with some Muslim women because they entirely cover the body – was controversially introduced earlier in August.

The three women, aged from 29 to 57, were with their children at the beach when police officers intervened over the offending garments.

Four of the women were fined €38 (£33) while all were given warnings and told to leave the area, Le Parisien reported.

“They are young mothers or grandmothers, and they do not believe they are criminals,” a local council source told the website. “All were very upset at the way they were treated.”

Mayor David Lisnard, caused uproar among Muslim groups by making Cannes the first resort town to impose a ban on the full-body swimsuits. He said: “I took this decision among several other rulings to make sure my city is safe in the context of the state of emergency.”

When the decision to impose such a ban was challenged in court, the judge ruled …

“The wearing of distinctive clothing, other than that usually worn for swimming, can indeed only be interpreted in this context as a straightforward symbol of religiosity,”

As a response to this ruling the CCIF lawyer, Sefern Guez Guez, stated “This decision opens the door to a ban on all religious symbols in the public space”.

This is quite frankly not only absurd, but is also a gross abuse of basic human liberty.

Yes, Muslims believe stuff that is not actually true, but that is also true of every belief. Yes, there are strands of Islamic belief that are by nature violent, but the vast majority are not.

Within some Islamic states, there is a legally enforced dress code for women. We criticise then for using the law to impose a religiously-inspired dress code. here now in France we also now find the deployment of law to dictate how women should dress. If there is to be any kind of a ban then I suggest that banning lawyers from poking those noses into the wardrobes of women might be a good place to start. Dictating how people should and should not dress will do nothing except alienate and antagonise.