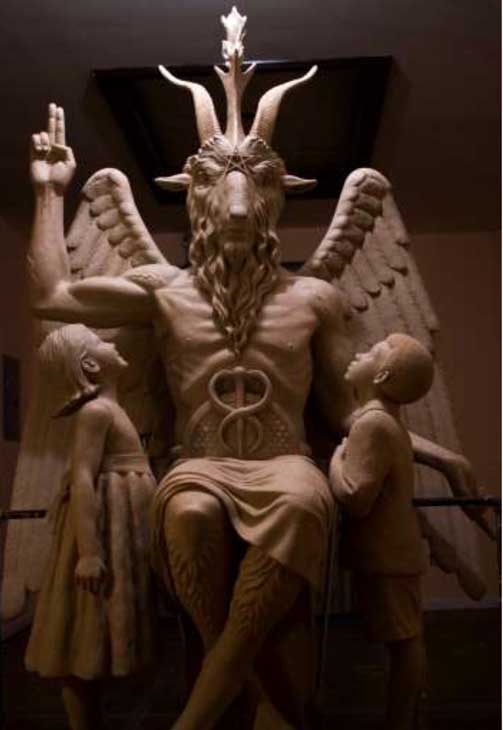 For this latest bit of drama, the curtain raises, and nestled safely upon the centre stage is the opening act waiting to greet us.

The landscape that beckons is Arkansas, God’s very own select and very special country. To prove just how ultra special and religious they are, they have already prepared the scene in advance by passing a special law that empowers them to ignore the constitution and erect religious monuments within the grounds of the state capital. I’m not making this up, they really did do that last year. Having previously seen how this all played out in Oklahoma, they wanted to be sure that the law was on their side.

Having established a legal right, next comes the plan to actually erect a Ten Commandments monument. If I asked you to guess which specific political party the Senator behind this gem of an idea was from, I suspect you would nail it in one. It is of course a Republican, and his name is Jason Rapert, and individual who manages to tick all the regressive boxes, anti Choice,  homophobic, and just foaming at the mouth in his desire to use nuclear weapons. He sounds like a caricature, but sadly is quite real, and oh yes, tweets about pulling his gun and shooting random strangers. It should also not be a huge surprise to discover that he is deeply religious, he is the founder and president of Holy Ghost Ministries, and makes annual missionary visits to Ghana. So finding that he is the mover behind the idea of spending $25,000 erecting this multi ton homage to religious insecurity does not exactly require a huge leap of imagination at all.

Oh but wait, the show is not over because we now have a new player – enter stage left, the Satanic Temple.

On Aug 11, an application was received from the Satanic Temple to erect a statue on the grounds of the state capital as well.

This is the description contained within their formal application …

The central image we have chosen in our monument design is known as ‘Baphomet’; a goat headed, angel winged, androgynous creature first rendered in its most widely recognised form by occult historian Eliphas Levi in the 19th century. The name Baphomet, how ever, comes much earlier from during the Crusades when Muslims were demonised derived from ‘Mahomet’, or Muhammad, prophet of Islam. For centuries, Jews were regularly accused of all of the things now attributed to an imaginary Satanist conspiracy: infant sacrifice, cannibalism, complex plots against the Common Good. During the early colonization of the US, it was commonly believed that the Native ‘Indians’ worshipped Satan. Later, black slaves were the feared Satanists, believed to be entering into pacts with the Devil as part of a supernatural plot to overthrow their oppressors. And, of course, most everybody is aware of the Puritan witch hunts. These unjust accusations, these savage out group purges, are all a part of the trial and error that helped us to realize our need for a rational, secular legal system. Standards such as the accuser’s burden of proof, the presumption of innocence, a respect for material evidence, are all a result of our finding ways to subdue brute mob intolerance. Today, we are rightly offended by anti blasphemy laws and divine fiats.

Our monument will stand in honor of those unjustly accused, the slandered minority, the maligned outgroups, who ultimately found a home in the United States where religions are neither opposed nor imposed so that we might pay respect to their memory and celebrate our progress as a pluralistic nation founded on secular law. Our monument will commemorate the codification of American Constitutional Law, the establishment of  jurisprudence, and presumption of innocence.

You can of course hear the immediate cries of, “Oh but wait, you can’t do that, you have no support for this“.

They have anticipated that and so their application also advises …

Judging by the large number of emails, letters, and positive public reaction we’ve witnessed in regards to our request to place the Baphomet monument on public grounds, we believe our public support is significant. If requested, we can initiate a petition to substantiate the substantial quantity of people who feel Baphomet deserves placement on the Arkansas State Capitol Grounds

Within Section 2 they are asked to Explain why

We feel that giving placement to the Baphomet monument alongside the 10 Commandments will affirm Constitutional pluralism,

Within Section 4 – They are asked to explain where

You are going to love this bit …

Within Section 5 – They are asked for an illustration

They have provided the following picture … 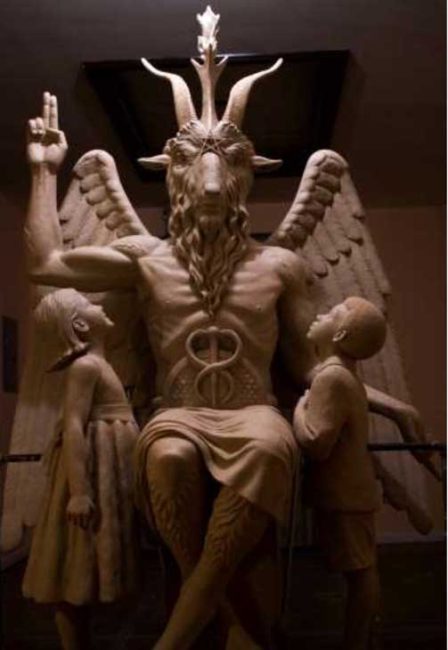 So what is this really all about?

If you are familiar with the Satanic Temple, then you will be aware that they are not actually a religious group at all. Instead they are a group that promotes secularism via a religious facade. In other words, to go head-to-head with an irrational religious belief they counter with a weird religious belief.

Whenever a state body attempts to get into the religious business, then they turn up with their variation of belief to drive home the point that either all beliefs are really accepted, including Satanism, or more correctly, that the state remains neutral and thus adhere to the constitution.

So now Senator Rapert faces a choice of either backing down and so enabling Arkansas to remain totally neutral and secular, or moving forward and permitting the goat headed Baphomet to take up residence in the state capital.

The third option, the most probably one, is that they could do what Oklahoma just did and try to just stick with then 10 commandments monument and ignore this. That resulted in a legal case that went against them and so Oklahoma was forced (under the cover of darkness) to remove it last Oct.

There is a lot to be said about the 10 commandments themselves, for example, they are not the be-all and end-all of moral thinking that many believe them to be, nor is US law in any way based upon them. If you examine the tenants of the Satanic Temple, which you need to remember is actually a political group that promotes secularism, then what you find is guidance that is morally far superior than the far more famous 10…

Things have moved on since the 10 were first written down in Exodus and Deuteronomy sometime between the 8th and  6th Century BC, we can and should do a lot better today.