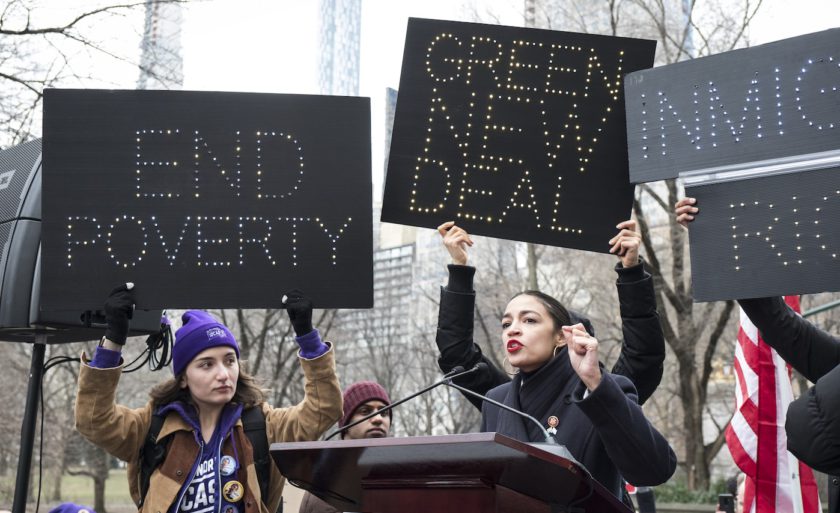 Talk is easy, but what is really needed is not ambition, nor desire, or even good intentions, but instead clear decisive action.

Democratic Sen. Ed Markey of Massachusetts has been working with freshman Democratic Rep. Alexandria Ocasio-Cortez of New York on “Green New Deal” legislation that will be unveiled soon, an aide to Markey confirmed to CNN on Thursday.

There is no final text yet, as some parts of the legislation are still being worked on. There is not a specific date for introduction yet — but the aide says they expect it to be soon.

The legislation will address issues such as job creation, emission reductions, greening infrastructure and a variety of principles that would come with a “robust” climate-change package, this aide says.

“I am thrilled to see so many of the potential 2020 presidential candidates embracing the idea of a Green New Deal,” Ocasio-Cortez told CNN earlier this month. “The oil and gas lobbyists won’t back down without a fight and that’s why we need to support groups like Sunrise Movement in their efforts to keep the pressure up. When the scientific consensus says that you have 12 years to avoid climate catastrophe, it’s time to get to work.”

Movement leaders have not agreed on a price tag. Estimates run in the hundreds of billions of dollars or more. But they argue a combination of tax hikes on the super wealthy — Ocasio-Cortez has floated a 70% rate on income over $10 million — and cuts to fossil fuel industry subsidies and military spending, in addition to the stimulative effects of the new public spending would offset any cost.

What does the Climate Science Community think of this?

The right-wing has leapt on the “12-years left” observation made by Rep. Alexandria Ocasio-Cortez because they believe it to be wholly unwarranted fiction.

ThinkProgress contacted leading experts on exactly what the science says. They confirmed that, yes, as Ocasio-Cortez says, we must act swiftly if we’re to maintain any plausible hope that we can avoid the catastrophic impacts that come with warming of 2°C or more above pre-industrial temperatures.

“Projected impacts look especially bad beyond 2°C or so of planetary warming,” leading climate expert Michael Mann told ThinkProgress. “And there is no scenario for stabilizing warming below 2°C that doesn’t require rapid reductions in carbon emissions over the next decade.”

Andrew Jones, co-director of Climate Interactive, a U.S. think tank that generated some of the scenarios the IPCC used in its report, said he “definitely” agreed with Mann’s assessment. Rapid reductions means a 30-50 percent decrease in global emissions by 2030, rather than the 10 percent increase we are currently looking at.

It is not possible to overstate the urgency of the matter. As Debra Roberts, a co-chair of the report’s working group on climate impacts, told The Guardian back in October, “This is the largest clarion bell from the science community and I hope it mobilizes people and dents the mood of complacency.”

Did she really say the world would end in 12 years?

No, that’s just more of the usual right-wing fictitious BS, they simply quote-mined what she actually said and then misrepresented it. When challenged, she can cite evidence …

A few hours later, after conservatives had begun taking her line out of context and attacking her, she tweeted, “For some reason GOP seems to think this is a gaffe, but it’s actually a generational difference. Young people understand that climate change is an existential threat: 3,000 Americans died in Hurricane Maria.”

Ocasio-Cortez added, “The U.N. says we’ve got 12 years left to fix it.” She included a link to The Guardian piece that made the exact same point back in October when the IPCC report first came: “We have 12 years to limit climate change catastrophe”

You can read more on all that here. It basically verifies that she is 100% right, and these right-wing pundits are on the wrong side of history.