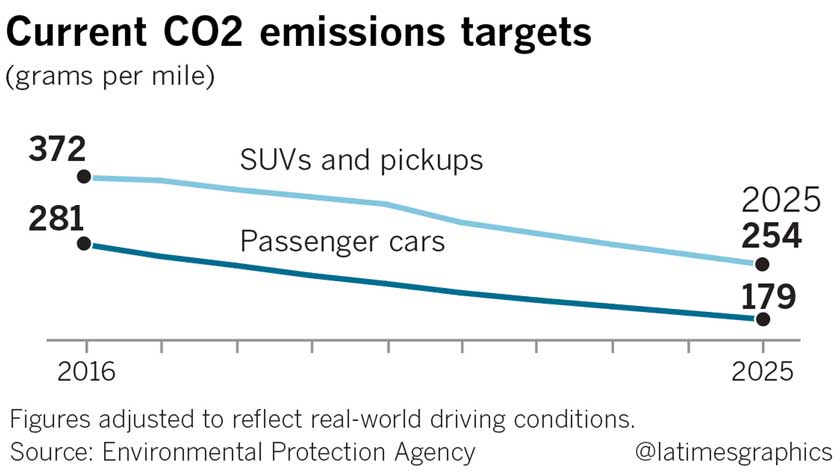 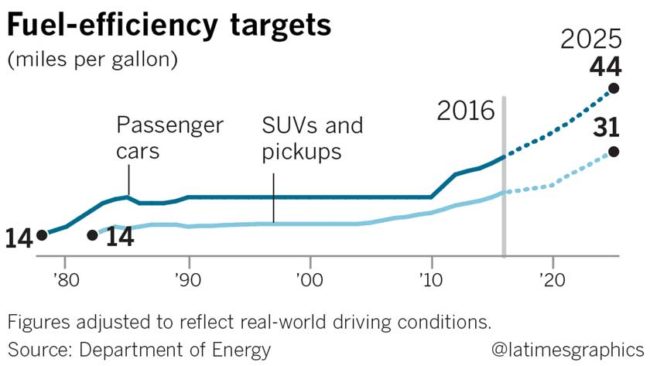 The Trump administration is poised to abandon America’s pioneering fuel economy targets for cars and SUVs, a move that would undermine one of the world’s most aggressive programs to confront climate change and invite another major confrontation with California.

The Environmental Protection Agency is expected to announce in the coming days that it will scrap mileage targets the Obama administration drafted in tandem with California that aim to boost average fuel economy for passenger cars and SUVs to 55 miles per gallon by 2025, according to people familiar with the plans.

The agency plans to replace those targets with a weaker standard that will be unveiled soon, according to the people, who did not want to be identified discussing the plan before it was announced.

EPA spokeswoman Liz Bowman said a draft determination was undergoing interagency review and a final decision would be made by Sunday.

To answer that I’m going to turn to a recently issued IEA (International Energy Agency) report. Within this report it highlights that globally CO2 emissions have increased in 2017, not fallen.

Within the section that discusses oil, they lay out the facts …

Global oil demand rose by 1.5 million barrels a day (mb/d) in 2017, continuing a trend of strong growth since prices fell in 2014. The rate of growth of 1.6% was more than twice the average annual growth rate seen over the past decade.

… and then explain exactly why …

One of the main drivers of growth was the transport sector. Vehicle ownership levels increased in 2017, as did the share of Sport Utility Vehicles (SUVs) and other large vehicles. This was particularly visible in the United States, where the share of SUVs and light trucks increased from 47% in 2011 to around 60% of total sales in 2017, bringing up the share of these vehicles in the total passenger car fleet to almost half. It is also a factor in the European Union, where oil demand increased by 2%, the highest rate of growth since 2001.

The trend towards larger vehicles has also slowed the pace of decline in average vehicle fuel use, partly offsetting energy efficiency policy efforts. Electric cars are making rapid inroads in many markets, particularly in China, which is leading global sales. For now, however, the strong growth in electric-car sales remains too small to make a dent in oil demand growth.

In other words, putting in place regulations that greatly reduce the CO2 emitted by these gas guzzlers was a very smart move. Here is what the roadmap looked like … 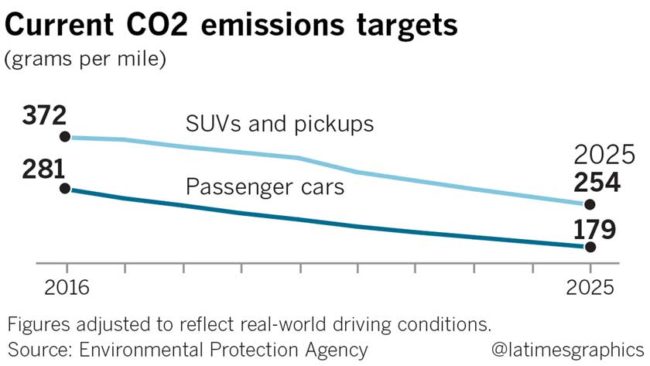 What happened, and what will happen?

When Trump was elected the auto manufacturers lobbied hard for the regulations to be watered down. This now appears to be potentially about to happen.

California, under the Clean Air Act, has authority to impose its own standards. Automakers don’t like the idea of having multiple production lines to comply with different regulations in different states – costs. The Federal government has generally recognised this and so there has been a nation wide mileage target up until now that folds in the strict regulations.

The new proposal to water all that down puts the EPA in direct conflict with the state of California. They have made it clear that they will not be backing down and rolling over on this …

the EPA chief is striking an increasingly hostile tone toward it, suggesting that he may seek to revoke the federal waiver that allows California to impose tougher rules than those of the federal government.

State leaders are daring him to try. They are confident it is a legal fight California would win.

“We are not going to go backward,” said California Atty. Gen. Xavier Becerra. “We are not interested in a race to the bottom…. We are prepared to take whatever action, legal or otherwise, we have to to protect our health and our economy.”

“We didn’t make these moves lightly,” Becerra said of the fuel economy targets. “They came after years of study, scientific evidence, fact-gathering, comment periods, a lot of back and forth among experts and stakeholders. To unwind this and go backward would cost our industries and cost our people billions of dollars. There has to be a good reason to make any kind of move. We have seen nothing change that would make California change its position.”

How this plays out is not simply a political battle, but rather is a battle between the scientific reality of climate change and the need to address it, and the denialism that is rooted in a rejection of that reality.

It is all rather simple – either we cut our CO2 emissions or we don’t and instead reap the consequences.