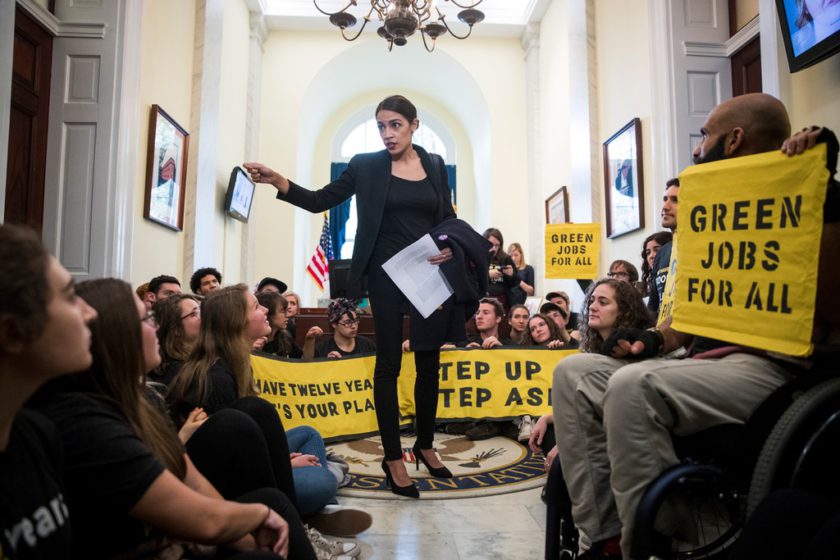 Normally C-Span is dull and tedious. The idea that you would grab a clip from C-Span to share on social media and then literally millions would find it utterly mesmerising should be laughably unthinkable … and yet just three letters changed all that. When it comes to ideas such as social justice, tolerance, and also climate, then AOC is a whirlwind of truly inspiring activity.

ExxonMobil have known about Climate Change for a long time

Here is AOC interviewing Martin Hoffert last Wednesday (23rd Oct 2019). He was a scientist and consultant for Exxon Research and Engineering in the 1980s. Within this clip he is responding to the New York congresswoman Alexandria Ocasio-Cortez. Hoffert testifies that in 1982, Exxon scientists predicted how carbon dioxide levels would rise and heat the planet as humans burned more fossil fuels.

She points out, using a very old Exxon report that was until recently kept secret, that the calculations they had made back in the 1982 more or less exactly align with what we now observe. The punch comes at the end of the following clip where Hoffert’s ego motivates him to proudly confess “We were excellent scientists,” and she adds: “Yes. You were: so they knew.”

The Guardian used this to run the following story “Exxon sowed doubt about climate crisis, House Democrats hear in testimony” …

“What they did was wrong. They spread doubt about the dangers of climate change,” testified Martin Hoffert, who was a scientist consultant for Exxon Research and Engineering in the 1980s. “The effect of this disinformation was to delay action internally and externally … As a result, in my opinion, homes and livelihoods will likely be destroyed and lives lost.”

ExxonMobil is one of the top 20 companies responsible for a third of carbon dioxide emissions since 1965, an investigation by the Guardian has revealed.

When the Green New Deal reached the Senate the GOP majority quite predictably voted it down because it was supposedly Elitist. Her response was not political theatre but a passionate deeply emotional response …

‘You want to tell people that their desire for clean air and clean water is elitist?’, yells a impassioned Ocasio-Cortez. ‘Tell that to the kids in the South Bronx which are suffering from the highest rates of childhood asthma in the country … You’re telling those kids that they are trying to get on a plane to Davos? People are dying!’

This one is also from this past week. Not only do we have her ExxonMobile moment in the spotlight but we also have her grilling Mark Zuckerberg and leaving him utterly bereft of words on the same day. She reveals how he refuses to remove fake news …

At another point, when he denies any knowledge of what his company was doing with the Cambridge Analytica data which harvested millions of Facebook users’ personal information to influence the 2016 US election, she points this out …

This was the largest data scandal with respect to your company, that had catastrophic impacts on the 2016 election.

All Zuckerberg can do is squirm.

So who are you going to vote for?

The answer is the people who do their homework, are passionate, inspirational, decent, honourable, smart, articulate, honest, visionary, and will take meaningful decisive action to address the greatest challenge our species has ever faced – climate change.

There is literally nobody left in the GOP like that. They have become the party of lies, deceit, anti-science, actively dismiss the reality of Climate change, and put an utterly incompetent buffoon into office. If you are voting for them and for Trump, then that tells me nothing at all about them, and a great deal about you.