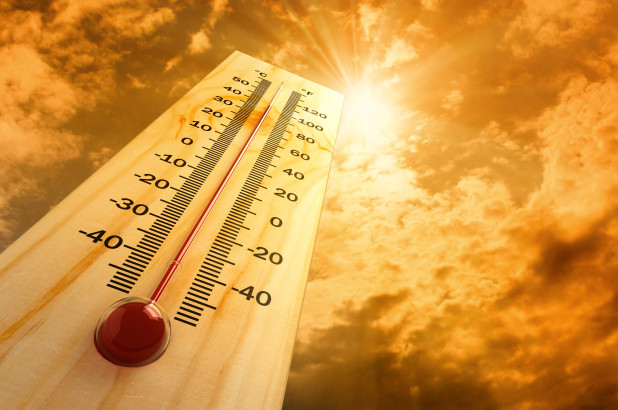 I have two climate stories today. Both highlight how climate change is impacting ecosystems. In isolation each is alarming. Put them together and we can view them as signals, a strong warning, that these major and rather important ecosystems are suffering considerable stress and face total wipeout if we continue to do nothing truly meaningful.

One concerns the costal kelp off the west coast of North America. The other is focused upon the Amazon.

Let’s take each in turn.

A climate-related catastrophe off the California coast has resulted in the death of 90% of the kelp from San Francisco to Oregon as an explosion of ravenous urchins devours everything in sight. And it’s happening at the same time native fish in San Francisco Bay are dying out, two studies released Monday documented.

The studies, by government, university and scientific institute researchers, offer a disturbing look at an underwater ecosystem suffering more than anyone previously suspected — along the coast, in San Francisco Bay and in the Sacramento-San Joaquin River Delta.

This is a Climate related story. The researchers are very much pointing the finger at climate change as the root cause of this ecosystem change. The precise description of it all is “environmental disaster“.

We can also of course skip over the media story and go directly to the alpha source – the scientific paper published within “Nature Scientific Reports” on 21st Oct. This is a data that confirm it all. 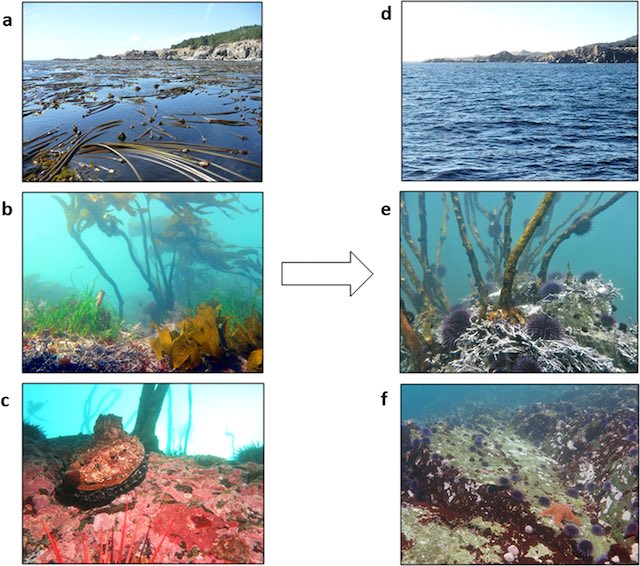 Here, we describe the rapid climate-driven catastrophic shift in 2014 from a previously robust kelp forest to unproductive large scale urchin barrens in northern California. Bull kelp canopy was reduced by >90% along more than 350 km of coastline. Twenty years of kelp ecosystem surveys reveal the timing and magnitude of events, including mass mortalities of sea stars (2013-), intense ocean warming (2014–2017), and sea urchin barrens (2015-). Multiple stressors led to the unprecedented and long-lasting decline of the kelp forest. Kelp deforestation triggered mass (80%) abalone mortality (2017) resulting in the closure in 2018 of the recreational abalone fishery worth an estimated $44 M and the collapse of the north coast commercial red sea urchin fishery (2015-) worth $3 M. Key questions remain such as the relative roles of ocean warming and sea star disease in the massive purple sea urchin population increase. Science and policy will need to partner to better understand drivers, build climate-resilient fisheries and kelp forest recovery strategies in order to restore essential kelp forest ecosystem services.

All of this is getting very little attention, largely because it is happening underwater. Most are oblivious because they do not see it.

Meanwhile the researchers studying it are freaking out because they do see what has happened.

As with the previous item, let’s start with the media story, then drill down into the actual report that backs it up.

The Guardian reports on 23rd October as follows …

Soaring deforestation coupled with the destructive policies of Brazil’s far-right president, Jair Bolsonaro, could push the Amazon rainforest dangerously to an irreversible “tipping point” within two years, a prominent economist has said.

After this point the rainforest would stop producing enough rain to sustain itself and start slowly degrading into a drier savannah, releasing billions of tonnes of carbon into the atmosphere, which would exacerbate global heating and disrupt weather across South America.

Their source is a Report by the Peterson Institute for International Economics in Washington DC. It is titled “The Amazon Is a Carbon Bomb: How Can Brazil and the World Work Together to Avoid Setting It Off?“. This is an economic policy brief that issues a warning. It also includes the steps that need to be taken to avert a looming disaster.

The report is controversial

Some subject matter experts think the tipping point is still about 15-20 years away while others think it is wholly valid.

Carlos Nobre, one of Brazil’s leading climate scientists and a senior researcher at the University of São Paulo’s Institute for Advanced Studies, commented as follows …

“It seems very improbable to me – the projected deforestation increase is more an economic calculation than ecological,” he said. However, he added: “We are seeing an increase in deforestation, I am not questioning this.”

The tipping point is reached when when 20% to 25% of the rainforest has been felled. That number comes from research that is available in a paper published on AAAS Science Advances (Feb 2018) titled “Amazon Tipping Point”.

So where are we right now with the Amazon, how close are we?

We are currently at 17% deforestation. The report calculates that we get to the tipping point by 2021 if the current rate of deforestation is sustained.

Nobre disagrees, he views it as follows ….

Whichever way you slice it, there is no disagreement on this – there is a tipping point and it is fast approaching.

That should terrify us.

We are not helpless

The warning signs are there, ecosystem stress signals are flashing, but the window for the opportunity to take meaningful action is not yet closed.

What comes next is very much down to the collective decisions we all make.

Hint: We have got to stop electing completely incompetent lunatics such as Trump, and Bolsonaro.