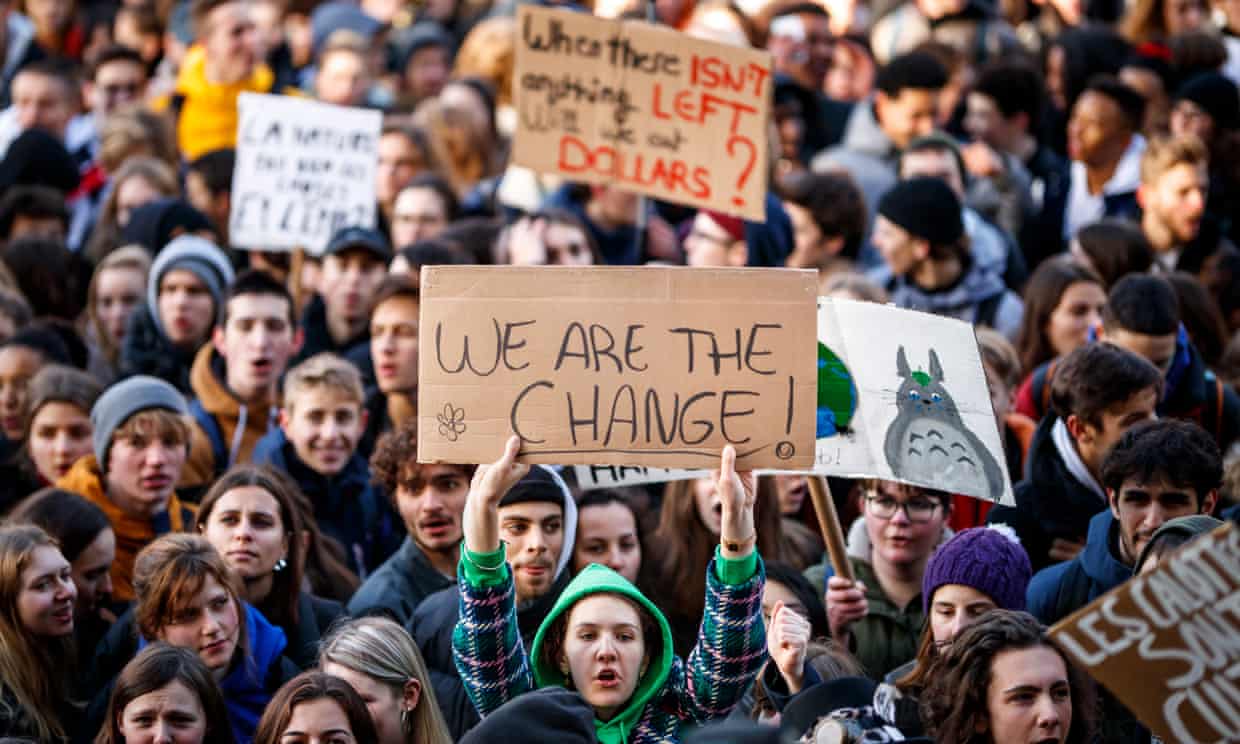 At the Guardian we believe the climate crisis is the most urgent issue of our times. And we know that Guardian readers are equally passionate about the need for governments, businesses and individuals to take immediate action to avoid a catastrophe for humanity and for the natural world.

Today the Guardian is making a pledge to our readers that we will play our part, both in our journalism and in our own organisation, to address the climate emergency. We hope this underlines to you the Guardian’s deep commitment to quality environmental journalism, rooted in scientific fact….

…We now have dedicated reporters around the world, including in the US, the biggest carbon polluter on the globe; Australia, the biggest exporter of coal and liquid natural gas; and Brazil, where President Jair Bolsonaro has disputed that climate is a factor as fires rage in the Amazon….

In her speech to Congress in September, Greta Thunberg said: “This is the moment in history when we need to be wide awake.”

I agree. And my pledge today is that the Guardian will give the climate crisis the attention it demands – and deliver our open independent reporting to everyone.

There are a few things here.

Related to this they also published on that same day, the 16th, a new glossary titled “Guardian language changes on climate matters“. The essence of it is this …

This is not your usual article, but instead is a very comprehensive investigation by a team of four journalists. Be warned, it is also a long read and includes some very good graphics.

The essence of it is this …

Australia is among the 11 worst countries when it comes to deforestation, according to the World Wildlife Fund. Queensland has the highest clearing rate but NSW is rapidly becoming a hotspot.

“Land clearance and degradation is one of the greatest crises facing Australia and the world,” says Bill Hare, the chief executive and senior scientist with Berlin-based Climate Analytics. “It undermines the basis for food production, is causing species loss and ecological decline, destroys climate resilience, degrades water resources and reverses carbon storage on the land.”

“I am pretty despairing. There is so much science to tell us what we need to be doing and they totally ignore it.”

It is not only very comprehensive and detailed, but this is also a very important article. I can highly recommend investing a bit of time reading it. You will drop out the other side far better informed.

At the bottom they also have 4 more related articles that dig into it all in even more detail.

What Is Going on Here? – It is the Funnel

Applause worthy as all this is, it is also all Business-School 101.

With the rise of the internet the print media faces a huge challenge. We don’t buy print media to the degree that we once did, and so how do Media publishers survive?

There are basically two common models …

For the Guardian it is neither. Instead they have opted to focus on the things that truly matter and to openly produce a rich source of deep quality original and generally evidence-based information that is designed to inspire loyalty and motivate supporters/subscribers to support them. In other words, their model is the classical Funnel.

What is the Funnel?

Basically each stage reduces the numbers … Monthly unique visitors > repeat visitors > daily visitors > paid members or subscribers, hence the common term is “The Funnel. Paywalls around premium content is the most common variation, but they have opted to remain open and simply ask readers to support them.

Climate is indeed the greatest threat our species has ever faced, and so the creation of a reliable source of insights into what is actually happening does indeed warrant our support.

I have no financial interest in promoting them, nor have they asked me to do so. The topic of climate is one that many are truly passionately concerned about, hence finding and supporting a reliable source of information does justify seriously considering supporting them

If interested in doing so then you can contribute to their journalistic work … via here … or simply become a subscriber … via here.

Personally I think that the importance of what they are focusing on does deserve your support.

2 thoughts on “Climate and The Funnel”