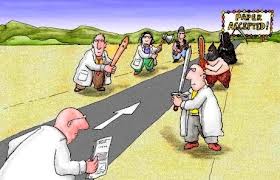 One of the many variations of modern creationism (the folks that claim ‘god did it’ is the right answer) is called “Intelligent Design”. There they attempt to refute evolution via the promotion of scientific evidence for an intelligent designer, and also attempt to make it more palatable by omitting all religious terms from what is essentially a religious claim. Well, if they wish to take a scientific approach, then this becomes quite interesting because this is a measurable claim, all we need to do is to take a look and see if they have published any credible peer-reviewed articles within any recognised scientific journals.

Does this matter? Sadly yes it does, a good percentage of the public do still seriously doubt the reality of evolution as a well-established scientific fact, they have been successfully conned by some supposedly credible claims, so it is indeed appropriate to throw a spotlight upon the intelligent design community and reveal that their aura of credibility is simply an illusion.

Almost two years ago, I went through the list of Peer-reviewed articles posted up by the Discovery Institute, a well-financed US-based group that promotes Intelligent Design. What did I find? … (Oh come on, you can guess) … yes, that’s right, exactly nothing, they did not have anything credible, not one jot.

They have since then revised their list and greatly extended it, so the time is now right for a return visit to this bastion of creationist “peer-reviewed” fodder.

The title remains the same, “PEER-REVIEWED & PEER-EDITED SCIENTIFIC PUBLICATIONS SUPPORTING THE THEORY OF INTELLIGENT DESIGN (ANNOTATED)“. My approach will be the same as last time – basically apply an initial filter to remove the junk, then take a look at what remains. But first, there is an observation to be made about some initial commentary they have added. They now make this claim …

Despite ID’s publication record, we note parenthetically that recognition in peer-reviewed literature is not an absolute requirement to demonstrate an idea’s scientific merit. Darwin’s own theory of evolution was first published in a book for a general and scientific audience — his Origin of Species — not in a peer-reviewed paper.

Seriously!! … Origin of Species, published in 1859, was not published in a peer-review journal, so that justifies adding books to their list. Do they not know that the Peer review process has only been a touchstone of the modern scientific method since the middle of the 20th century. No, the bottom line here is simple, books are out, anybody can publish anything (Harry Potter is evidence that Magic is real … right?), if they wish to refute evolution and propose an alternative, then they need to engage with the scientific community with real data, and publish it within a credible and appropriate scientific journal.

OK, on to my initial filter:

What do we have left after filtering?

Well, lets take a look at the remains.

William A. Dembski and Robert J. Marks II, “The Search for a Search: Measuring the Information Cost of Higher Level Search,” Journal of Advanced Computational Intelligence and Intelligent Informatics, Vol. 14 (5):475-486 (2010).

William A. Dembski and Robert J. Marks II, “Conservation of Information in Search: Measuring the Cost of Success,” IEEE Transactions on Systems, Man, and Cybernetics-Part A: Systems and Humans, Vol. 39(5):1051-1061 (September, 2009).

Stephen C. Meyer, “The origin of biological information and the higher taxonomic categories,” Proceedings of the Biological Society of Washington, Vol. 117(2):213-239 (2004)

Solomon Victor and Vijaya M. Nayak, “Evolutionary anticipation of the human heart,” Annals of the Royal College of Surgeons of England, Vol. 82:297-302 (2000).

… and that is it, the entire list, every possible vague reference that they could  dig up from a trawl through all the scientific literature going back over almost thirty years, and we end up with nothing credible, not one jot, nada … zilch … exactly zero. You see, the reason that 99.9% of biologists reject creationism is not because they are biased or brainwashed, but because there is no credible evidence.

Conclusion
The complete lack of any credible scientific evidence tells you all you really need to know. Is there any scientific foundation for Intelligent Design? The quick one word summary is “No“.

With no credible evidence on the table, any and all creationist claims need not be addressed, but instead should simply be dismissed. If they wish to ever assert a claim that is not dismissed, then they need to first go do some science that backs it up.