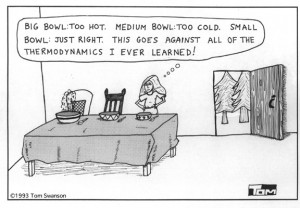 I’ve been advised that … “evolution violates the second law of thermodynamics (entropy always increases)“. Yep, somebody played that card, it came in the first comment on yesterday’s posting.

The initial questions to perhaps ask include:

If they do not have immediate access to google, then you will quickly discover that those making such claims are unable to answer such basic questions. Why? Well because all they are doing is parroting creationist rhetoric, they have not actually thought this through and do not know anything at all about any of the laws of Thermodynamics.

It sounds credible, “Gosh darn, the earth once had no life at all, but now we have very complex life, and since entropy always increases then the only possible answer is that my Judeo-Christian god must have done it“, and so if you skate over the surface like this you will indeed not only fool others, but you will also fool yourself. It is not only a bad argument, but has also been debunked many times over, so anybody making this claim has given it exactly zero thought.

Where shall we start? Well lets first give a very precise definition of this claim, a nice easy one so that we can see it clearly. It can be broken down as follows:

The first problem is in step 1. The second law of thermodynamics does not state that a system will always lose order or stay the same, it actually says that …

In any closed system, the entropy of the system will either remain constant or increase.

The key thing to understand here is the term “closed system”. Lets think about a Fridge. Quite clearly it works, but how is that possible if heat cannot flow from cold regions to hot regions? Well because it is not a closed system, you are using an external agent, the compressor.

Now lets run that by you again, but add in a bit more detail …

Lets call these two systems A and B. Lets assume that A was a lot hotter than B, so clearly as they interact, heat will flow from A to B until they reach a balance. As expected, the entropy of A increases … but wait, what has happened to B … gasp! … its entropy has decreased.

So what we actually have is a second law of thermodynamics that states that the total entropy of any system will not decrease other than by increasing the entropy of some other system. Hence, in a system isolated from its environment, the entropy of that system will tend to increase.

Hopefully you have got it.

Now, lets look at Step 3. The core of the claim is that “Evolution violates the second law of thermodynamics” … except it does not because the Earth is not a closed system, we gain radiated heat energy from the sun. Hopefully you can join up the dots now and fully understand that it is in fact possible to increase the order of a system when it is not a closed system, and that great big shining nuclear reactor in the sky is pumping out energy.

As you look around, you will find many natural examples of order arising quite spontaneously from disorder. Snowflakes with their six-sided crystalline symmetry are formed spontaneously from randomly moving water vapor molecules. Salts with precise planes of crystalline symmetry form spontaneously when water evaporates from a solution. Seeds sprout into flowering plants and eggs develop into chicks. If the creationist claim was valid, then none of this should be possible.

If you are a creationist, are you now curious to learn more, does this trigger questions in your mind? If yes, then thats good. For your next stop can I suggest that The Counter-Creationism Handbook might be a good port of call.