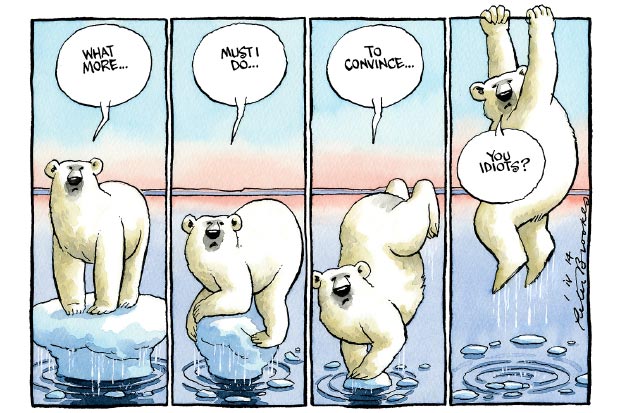 We often use some common variation of the phrase, “Well I bet that is true”, not as an actual bet, but rather as a way of expressing confidence that whatever it is being discussed is, in the opinion of whoever is saying it, highly probable. However, back in 2008 a couple of chaps took it to the next level – one that involved real cash.

It involves climate scientist James Annan and climate economist Chris Hope making a bet back in 2011 with some climate skeptics that has now paid out. Chris tells the story on his blog …

So, how did I turn increasing temperatures into cash? About five years ago I was at a conference in Cambridge where most of the participants were sceptical about the influence of humans on the climate. I took the microphone and asked if any of them would care to make a £1,000 bet with me about whether 2015 would be hotter than 2008. Two brave souls, Ian Plimer and Sir Alan Rudge, agreed.

As we now know, 2015 broke all records for global mean temperature. I won the bets.

Well this is how he very smartly hedged his risk …

I’m not a professional gambler. I do know a bit about risk, and how to manage it – my integrated assessment model of climate change, PAGE, allows people to assess the likelihood of different things happening depending on the action they take now. And I knew that climate scientist James Annan had made similar bets. So I asked him what odds he would give me. In 2011, he was confident enough in the reality of climate change to offer me odds of 5 to 1 against 2015 being cooler than 2008. We agreed a wager where I would pay him £666 if 2015 were warmer than 2008, and he would pay me £3333 if it were cooler. Why those slightly strange looking amounts? Because now I was perfectly hedged: I would win £1,333 if 2015 were cooler than 2008, and £1,334 if it were warmer.

Hey, now that is smart. If his first bet was right, he gets £2K and then pays out £666 to his buddy. If he was wrong, then he pays out £2K, but gets £3.3K from the other bet. In other words, he placed himself in a win-win scenario.

What about the Climate deniers that lost the bet …

Have either of them modified their views since 2011?

Plimer accuses the environmental movement of being irrational, and says that the vast bulk of the scientific community, including most major scientific academies, is prejudiced by the prospect of research funding. He characterised the Intergovernmental Panel on Climate Change as: “The IPCC process is related to environmental activism, politics and opportunism” and “the IPCC process is unrelated to science”.[29] He is critical of greenhouse gas politics and says that extreme environmental changes are inevitable.[citation needed] Some climatologists consider him a skeptic on climate change who misrepresents their data.[30] Other scientists, such as Donald Prothero another geologist, have reviewed similar data to Ian Plimer and have reached different conclusions [31][32]John Cooke (another Eureka Prize winner) maintains a website on climate change, Skeptical Science [33]and on his site describes Plimer as a Climate Misinformer.[34]

It is worth noting that Mr Plimer is a geologist and not a Climate scientist, so climate science is really not his subject area.

As an aside, you can find the various arguments Mr Plimer has deployed all laid out with an evidence-based rebuttal here.

His Wikipedia page does not tell us too much, it is just bare bones, but a general search reveals that he is still very much regarded as a leading climate change denier, for example here where he claims that he simply misunderstood the terms of the bet.

Both of these chaps are signed up members of the Global Warming Policy Foundation academic advisory board. The GWPF is a UK anti-climate advocacy group that generally relies upon unreliable sources of climate information.

Here now in 2016 the numbers reveal that they were wrong, very wrong, because 2015 was a record-breaking year.

Having now been shown to be wrong and to very publicly pay out the £1,000 each, they have still not changed their minds. Both still maintain their climate change denial stance.

Basically because once you have a great deal of time and energy invested in a specific public stance, it become rather difficult to change it. In other words, it is neither facts nor evidence in play, and is instead all about an emotional commitment to a now discredited idea.