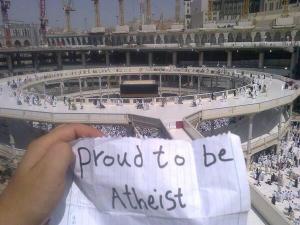 THE Islamic State has visibly attracted young Muslims from all over the world to its violent movement to build a caliphate in Iraq and Syria. But here’s what’s less visible — the online backlash against the Islamic State, also known as ISIS and ISIL, by young Muslims declaring their opposition to rule by Islamic law, or Shariah, and even proudly avowing their atheism. Nadia Oweidat, a senior fellow at the New America Foundation, who tracks how Arab youths use the Internet, says the phenomenon “is mushrooming — the brutality of the Islamic State is exacerbating the issue and even pushing some young Muslims away from Islam.”

I was writing about this precise topic yesterday and explaining that the very best argument against Islam is in reality, the manner in which Islam manifests itself today, and so I’d like to now expand upon this thought a bit further.

OK, so what is happening out there?

On Nov. 24, BBC.com published a piece on what was trending on Twitter. It began: “A growing social media conversation in Arabic is calling for the implementation of Shariah, or Islamic law, to be abandoned. Discussing religious law is a sensitive topic in many Muslim countries. But on Twitter, a hashtag which translates as ‘why we reject implementing Shariah’ has been used 5,000 times in 24 hours. The conversation is mainly taking place in Saudi Arabia and Egypt.

… The BBC added that “many others joined in the conversation, using the hashtag, listing reasons why Arabs and Muslims should abandon Shariah. ‘Because there’s not a single positive example of it bringing justice and equality,’ one man tweeted. … A Saudi woman commented: ‘By adhering to Shariah we are adhering to inhumane laws. Saudi Arabia is saturated with the blood of those executed by Sharia.’ ”

There is indeed a growing realisation that you can either support basic human rights, or you can support the idea of sharia, and that you simply cannot do both because they are mutually exclusive concepts.

Ismail Mohamed, an Egyptian on a mission to create freedom of conscience there, started a program called “Black Ducks” to offer a space where agnostic and atheist Arabs can speak freely about their right to choose what they believe and resist coercion and misogyny from religious authorities. He is part of a growing Arab Atheists Network. For Arab news written by Arabs that gets right in the face of autocrats and religious extremists also check out freearabs.com.

No longer isolated, the Internet enables those that do not believe to find each other, and so not only does the Internet disrupt traditional business models, it also disrupts traditional beliefs – change is now inevitable especially, when faced with ISIS who are giving a practical demonstration to all that they are on the wrong side of the moral argument.

A letter for Obama

The politically correct response from leaders such as Obama is to assert that ISIS/ISIL is not Islam and that they are simply a gang of thugs. In response to this Brother Rachid, a Moroccan, has a YouTube clip up with a rebuttal …

“Dear Mr. President, I must tell you that you are wrong about ISIL. You said ISIL speaks for no religion. I am a former Muslim. My dad is an imam. I have spent more than 20 years studying Islam. … I can tell you with confidence that ISIL speaks for Islam. … ISIL’s 10,000 members are all Muslims. … They come from different countries and have one common denominator: Islam. They are following Islam’s Prophet Muhammad in every detail. … They have called for a caliphate, which is a central doctrine in Sunni Islam.”

…Mr. President, if you really want to fight terrorism, then fight it at the roots. How many Saudi sheikhs are preaching hatred? How many Islamic channels are indoctrinating people and teaching them violence from the Quran and the hadith? … How many Islamic schools are producing generations of teachers and students who believe in jihad and martyrdom and fighting the infidels?

Here is that YouTube clip and it has already been watched by half a million people. The positive votes for it far outvote the negative votes by a factor of over 10 to 1 …

Another great example of the rising tide of defiance is the Facebook group called Stealthy Freedoms of Iranian Women, and already has over 731,000 followers. The group describes itself as follows …

This page does not belong to any political group and the initiative reflects the concerns of Iranian women, who face legal and social restrictions.

Are there really people in Saudi Arabia who are not religious?

Yes, very much so.

Back in 2012 there was a poll that revealed that 25% of people in Saudi Arabia privately identified themselves as not religious.

This should not be a surprise, Wahhabism, might indeed be the official and dominant form of Sunni Islam in Saudi Arabia and strongly imposes itself by force, but the reality is that it is a minority belief, only about 23% align themselves with Wahhabism, the rest do not, and so while most wear a religious mask, behind that mask 1 in every 4 do not actually believe.

The days of Islamic Tyranny are numbered

The Internet has created a free, safe, space that is outside and beyond the control of clerics and dictators, and so that is where the Islamic Ideas are revealed as ideas that are both oppressive, opposed to basic human rights, and morally bankrupt. This new open flow of information is giving birth to a generation that is walking away from the oppression and theocratic dictatorship. The Internet is doing to Islam what the Printing Press did to Christianity.

Are you a Muslim who is having doubts  and are seeking help?

It was written by Mr Rahman over the course of 8 years and details his reasons for leaving Islam & becoming an agnostic humanist. It is a comprehensive and objective study for Muslims seeking a fair & balanced analysis of traditionalist Islam; and for non-Muslims interested in gaining rarely found insights.

1 thought on “The rising tide of disbelief within Islam”