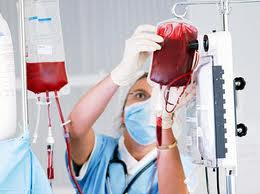 Now here is a news story that illustrates just how truly insanely stupid an irrational belief can make you. When faced with a choice between an irrational belief, or a life saving operation, I’m sure your previous experience with these Jehovah’s Witness kooks will allow you to guess the choice made.

Its all concerns a lady called Mary Stinemetz, 64, who needed a liver transplant, one that would be paid for by Medicaid, at the University of Kansas Hospital. The problem (for her) was that she would be forced to compromise her Jehovah’s Witness delusions, because she would also need to receive a blood transfusion as part of this operation, something she believes violates the fictional laws of  a mythological supernatural entity (to whom she has given a pet name of “God”)

Stinemetz, however, could undergo bloodless transplant surgery in Omaha, Neb., but Kansas is refusing to pay for the out-of-state procedure when a transplant is readily available in Kansas.

That puts Stinemetz at the center of a constitutional controversy that pits Kansas’ Medicaid rules against her right to exercise her freedom of religion — with her life hanging in the balance. […]

Stinemetz is suing the Kansas Health Policy Authority, which administers the state’s Medicaid program. She contends that the state is violating her First Amendment rights to exercise her religion. She lost one round in her fight in December in Graham County District Court.

Wayne Wallace, a physician advising the state, also warned of the ethical issues a surgeon would face if a patient elected to have a bloodless transplant.

Although the surgical procedure between the two types of transplants is the same, the bloodless technique implies the surgeon would be willing to accept a patient’s death, even if a transfusion might save the patient, Wallace said at March 2010 hearing.

However, Stinemetz said Jehovah’s Witnesses follow biblical directives to abstain from blood, pointing to passages in the books of Acts, Genesis and Deuteronomy, according to court records.

Church doctrine leaves it to the discretion of members to accept certain blood fractions and donor organs.

The Watchtower Bible and Tract Society of New York has filed a friend-of-the-court brief on Stinemetz’s behalf.

Now to be frank, to some degree I do have a bit of sympathy for this lady. The tragedy is that the JW cult that she is a member of maintains a very tight control over its followers, so if she did indeed opt for the life-saving operation she would end up becoming an outcast. They claim that its followers are free to decide whether or not to accept blood transfusions, but that’s just PR spin, the reality is that those who go against the organization’s teachings end up being dis-fellowshipped and shunned. When you have a huge emotional investment in a belief, and also all your friends and perhaps family are also members, then the very idea of going against the belief system is unthinkable … even if it would save your life.

Now what also makes all this even more tragic is that the JW policy on blood transfusions is very inconsistent, they keep changing their minds …

Looks like God just can’t make his mind up.

A Kansas appeals court poked and prodded Wednesday, but kept returning to the same question.

What compelling reason did Kansas have for refusing to pay for a woman’s request — based on her religious faith — to undergo a bloodless liver transplant that could be done only outside the state? […]

“Don’t you have some type of compelling state interest to deny this, and what is that compelling interest?” Judge Stephen D. Hill asked the state’s lawyer, Brian Vazquez.

Hill’s comments came during a nearly hourlong session of the Kansas Court of Appeals, which generally allots about 30 minutes to hearings. […]

In that case, the court ruled that government could adopt laws that might burden someone’s religion as long as the law was neutral and didn’t target a specific religious faith.

The court is expected to issue a ruling later.

Lets hope they make the right choice. People should of course be free to believe whatever they like, but they don’t have the right to force any others, either individuals or the state, to conform to, or even acknowledge their insane beliefs.

Finally, if the JW cult is truly that concerned about blood transfusions, then perhaps they should pay for her inter-state bloodless operation – and why not, since its them that has inflicted this insane belief upon this poor distressed lady.