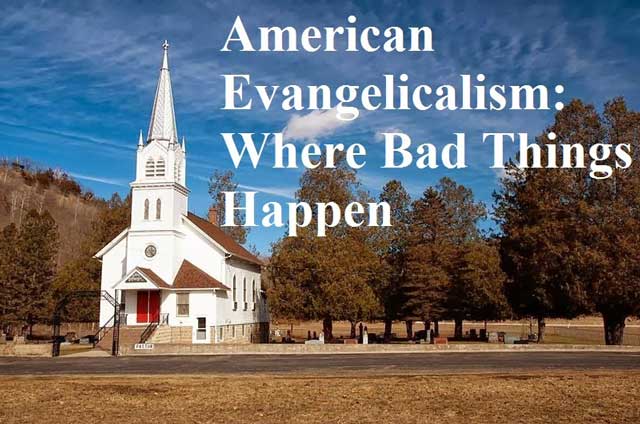 What exactly is an “evangelical”?

The word itself is usually deployed to describe the happy-clappy Christians who would describe themselves as “born again” and so generally it is composed of individuals who have not as such inherited their belief but have had a personal conversion experience that resulted in them making a specific commitment. That however is not what I’m getting at, and instead I’m more focused on what the word means to those outside and not just how those inside would attempt to define it.

Valerie Tarico, a psychologist and writer who is based in Seattle, Washington, has written a fascinating take on it from the viewpoint of thinking about it as a brand, which to be quite frank is exactly what it is. Her observations will not be popular with those inside because they are quite frank and to the point, and yet cannot simply be ignored because they are also wholly factual. She describes what the word “Evangelical” actually means in today’s world as follows … (WARNING: If you would self-describe as evangelical then you should perhaps stop reading, because what follows will be extremely uncomfortable reading)

Evangelical means obsessed with sex. Evangelicals are so desperate to fend off their own complicated sexual desires and self-loathing that they would rather watch queer teens commit suicide than deal with their homophobia. They abhor youth sexuality and female sexual pleasure to the point that they have driven an epidemic of teen pregnancy, unintended pregnancy and abortion—all because accurate information and contraceptive access might let the wrong kind of people (young unmarried and female people) have sex for the wrong reasons (pleasure and intimacy) without suffering for it.

Evangelical means arrogant. Wheaton College put Evangelical arrogance on national display when administrators decided to suspend and then fire a professor who dared to suggest that Muslims, Jews and Christians all worship the same God.

Evangelical means fearful and bigoted. While more secular Europeans and Canadians offer aid to Syrian refugees, Evangelical Christians have instead sought to exclude Muslims.  They have used their vast empire of telecommunications channels to inspire not charity but fear of imminent Sharia in the U.S. and of refugees more broadly. They have urged that Latin American refugees be sent home so that we can build a wall across the southern border before they come back.

Evangelical means indifferent to truth. Evangelicals refuse to acknowledge what is obvious to everyone else, including most other Christians—that the Bible is a human document woven through with moral and factual imperfections. Treating the Bible like the literally perfect word of God has forced Bible believers to make a high art out of self-deception, which they then apply to other inconvenient truths. They rewrite American History, embrace faux news, defend in court the right of “Crisis Pregnancy Centers” to lie, and force doctors to do the same. The end justifies the means.

Evangelical means gullible and greedy. From televangelists and Prosperity Gospel to adulation of Ronald Reagan and Ayn Rand, Evangelicalism faces the world as a religion of exploiters and exploited—both of which are hoping to make a quick buck.

Evangelical means ignorant. The only way to protect creationism is to keep people from understanding how science works and what scientists have discovered. As evidence accumulates related to evolutionary biology, insulating children requires a constant battleto keep accurate information out of textbooks. Insulating adults requires cultivating a deep suspicion of science and scholarship, an anti-intellectualism that diffuses out from this center and defines Evangelical culture at large.

Evangelical means predatory. Evangelical missionaries prey on the young and ignorant. They have fought all the way to the Supreme Court to ensure they can proselytize children in public grade schools. Having failed to block marriage equality in the States, they export Bible based gay-hate to Central Africa, where gays are more vulnerable. Since Americans lost interest in tent revivals, evangelists now cast out demons, heal the sick and raise the dead among uneducated low-information people in developing countries.

In so many ways Val does indeed nail it as it actually is. This is not specifically an assertion that the evangelical brand has been unfairly tarnished, but is instead the observation that it is evangelicalism itself that has failed.

Ah But that is “them” and not us

When such uncomfortable facts are spelt out like this a rather common rebuttal is to perhaps suggest that “they” are not really born-again and that “they” are not “true” Christians. It is quite a natural response and deep down inside this is the process utilised by those within any group to alleviate the cognitive dissonance that such criticisms might stir up, and yet a retreat into such thinking does not in any way nullify the reality of it all.

Seven Questions to ponder over

If you find that the term “Evangelical” is a term you might use to describe yourself, then here are a couple of questions for you to ponder over.

Should we not strive to make the world a better place?

7 thoughts on “What does “Evangelical” really mean?”