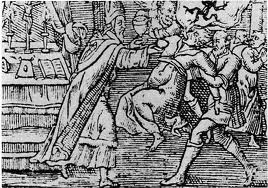 I’m happy for people to believe  whatever they wish, but I am not content to leave such nonsense unchallenged because it often leads to utterly tragic consequences.

The latest example of this concerns the utterly pointless death of a 13 year old girl, Salma, in Pakistan. The story is that her parents became convinced that she had become possessed by djinns (yes that is indeed genies as in Aladdin’s lamp), so they took her to a highly recommended pir to evict the djinns.

A 13 year old teenage girl going through puberty starts behaving oddly and their first conclusion is ‘she is possessed’!!! … I do hope this is not news for you, but djinns, demons, or spirits do not exist, it is all superstitious nonsense. There is no such thing as possession. Individuals do of course have issues that can manifest in a manner that fools others into thinking something supernatural is happening, and so while we today understand that it is all about brain chemistry, our more primitive ancestors attributed such things to mysterious unseen forces.

We carry a lot of cultural baggage from our ancestors, but logic and reason allows us to comprehend that such beliefs have no basis in reality. Tragically individuals embrace holy books and beliefs that tell them it is all real, and so when they start to act upon such beliefs, the consequences can often be truly horrifying.

The report of an autopsy performed on Salma, 13, stated that she had died from suffocation. It said the girl’s breathing was hampered by blocking her nostrils with cotton buds and holding her mouth shut.

The autopsy, carried out at Cheechwatni tehsil headquarters (THQ) hospital, confirmed that her skin was burnt with a hot iron rod. The report said there were bruises on the girl’s arms, face and chest.

Her last hours must have been truly horrendous, she was in effect tortured to death slowly in a very painful manner by a complete religious lunatic.

In an Islamic context, jinn are mentioned frequently in the Qur’an, and since millions believe that the Qur’an cannot be wrong, they embrace such nonsense as a reality. That then opens the door to enable tragedies such as this. It is not unique to Islam, numerous strands of Christianity also have a similar belief, except they use the term demons, and as in Islam, attempts at exorcism have resulted in children being tortured to death.

Believing complete bullshit is not harmless, it leads to tragedies that cost lives.