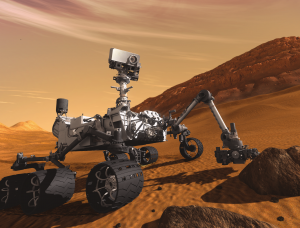 Yes, after many years we are just hours away.

This is not just another probe, you have something quite different about to happen, a type of landing never done before. This billion dollar probe is in fact a complete chemistry lab and so is  about five times larger that anything they have attempted to land on Mars before. To make it even more interesting, Mars is the Bermuda Triangle for space probes, a heck of a lot of them don’t make it.

Why is it so darn hard, we have landed bigger stuff on the moon without any problem? True, but that is easy, the calculations are stable because you have no atmosphere. For the moon you do your sums, fire your rocket and land .. easy. Mars is different, you have an atmosphere and that is the factor that can kill you … quite literally. When you land, will it be a hot warm day, and so the air will be thinner, or will it be a cold day thus making the air a lot thicker. Not knowing means that your calculations will be completely buggered up and so you may end up landing too hard, or coming up short.

Now just to make that challenge more interesting, as I mentioned, the probe is five times heavier that anything they have attempted to land before. It is not just an entire Chemistry lab, but is also a rover, so to handle the landing problem they are about to attempt something never ever tried before, something that looks so utterly crazy most think they are crazy to do it, and yet it is the product of reasoned engineering – they are landing using a sky crane.

Here is Steven Lee, the guidance, navigation, and control manager for the Mars Science Laboratory mission at the Jet Propulsion Laboratory, in Pasadena, Calif., describing how it will work

OK, so once it gets down, what will it do?

It will begin two (earth) years (one Mars year) of unprecedented scientific work and search for any evidence of life. NASA explains it as follows …

NASA’s Mars Science Laboratory mission will study whether the Gale Crater area of Mars has evidence of past and present habitable environments. These studies will be part of a broader examination of past and present processes in the Martian atmosphere and on its surface. The research will use 10 instrument-based science investigations. The mission’s rover, Curiosity, carries the instruments for these investigations and will support their use by providing overland mobility, sample-acquisition capabilities, power and communications. The primary mission will last one Mars year (98 weeks). The payload includes mast-mounted instruments to survey the surroundings and assess potential sampling targets from a distance; instruments on Curiosity’s robotic arm for close-up inspections; laboratory instruments inside the rover for analysis of samples from rocks, soils and atmosphere; and instruments to monitor the environment around the rover. In addition to the science payload, engineering sensors on the heat shield will gather information about Mars’ atmosphere and the spacecraft’s performance during its descent through the atmosphere.

Now here is a key point …

Whether life has existed on Mars is an open question that this mission, by itself, is not designed to answer. Curiosity does not carry experiments to detect active
processes that would signify present-day biological metabolism, nor does it have the ability to image microorganisms or their fossil equivalents. However, if this mission finds that the field site in Gale Crater has had conditions favorable for habitability and for preserving evidence about life, those findings can shape future missions that would bring samples back to Earth for life-detection tests or for missions that carry advanced life-detection experiments to Mars. In this sense, the Mars Science Laboratory is the prospecting stage in a step-by-step program of exploration, reconnaissance, prospecting and mining evidence for a definitive answer about whether life has existed on Mars. NASA’s Astrobiology Program has aided in development of the Mars Science Laboratory science payload and in studies of extreme habitats on Earth that can help in understanding possible habitats on Mars.

Three conditions considered crucial for habitability are liquid water, other chemical ingredients utilized by life and a source of energy. The Mars Science Laboratory mission advances the “follow the water” strategy of NASA Mars exploration since the mid-1990s to a strategy of determining the best settings for seeking an answer to whether Mars ever supported life.

Every environment on Earth where there is liquid water sustains microbial life. For most of Earth’s history, the only life forms on this planet were microorganisms, or microbes. Microbes still make up most of the living matter on Earth. Scientists who specialize in the search for life on other worlds expect that any life on Mars, if it has existed at all, has been microbial.

Curiosity will land in a region where this key item on the checklist of life’s requirements has already been determined: It was wet. Observations from Mars orbit during five years of assessing candidate landing sites have made these areas some of the most intensely studied places on Mars. Researchers have used NASA’s Mars Reconnaissance Orbiter to map the area’s mineralogy, finding exposures of clay minerals. Clays, other phyllosilicates and sulfates form under conditions with adequate
liquid water in a life-supporting, medium range between very acidic and very alkaline.

Curiosity will inventory other basic ingredients for life, seek additional evidence about water and investigate how conditions in the area have changed over time. The wet environment in which the clay minerals formed is long gone, probably occurring more than 3 billion years ago. Examining the geological context for those minerals, such as the minerals in younger rock layers, could advance understanding of habitat change to drier conditions. The rover can also check for traces of water
still bound into the mineral structure of rocks at and near the surface.

OK, so to sum it all up, their missing has four primary science objectives …

There are huge challenges here, namely Some of the same environmental conditions favorable for life can, paradoxically, be unfavorable for preserving evidence about life. Water, oxidants and heat, all of which can contribute to habitability, can destroy organic molecules and other possible markers left by life, or biosignatures.

Life has thrived on Earth for more than 3 billion years, but only a miniscule fraction of Earth’s past life has left evidence of itself in the rock record on this planet. Preserving evidence of life from the distant past has required specific, unusual conditions. On Earth, these
windows of preservation have included situations such  as insects encased in amber and mastodons immersed in tar pits. Mars won’t have fossils of insects or mastodons; if Mars has had any life forms at all, they were likely microbes. Understanding what types of environments may have preserved evidence of microbial life from billions of years ago, even on Earth, is still an emerging field of study.

To determine whether Mars ever supported life, a key step is learning where biosignatures could persist. Curiosity’s findings about windows of preservation will serve this mission’s prospector role: identifying good hunting grounds for possible future investigations about Martian life’s existence and characteristics. They can also guide this mission’s own course, informing decisions about where to drive and which rocks to sample in Curiosity’s search for organics. Accumulation of rock-forming sediments writes a record of environmental conditions and processes into those sedimentary rocks. The layers of the mountain inside Gale Crater provide a record of events arranged in the order in which they occurred. Researchers using Curiosity can look at how environments changed over time, possibly including transitions from habitable conditions to non-habitable conditions. Some of the clues are in the textures of the rocks, and Curiosity will be looking for distinctive rock textures. Other clues are in the mineral and chemical compositions.

Anyway, before we get to do all this, we first need to get there, and that is what is about to happen … the entire $2.5 Billion mission all now hinges on the landing … the seven minutes of terror.

Today, a post-launch briefing at JPL will begin within about an hour of the anticipated landing time (10:31 p.m. PDT) under most conditions, and within about three hours of the landing time if the spacecraft’s status is unknown.

View on NASA TV and on http://www.ustream.tv/nasajpl.

Specific information about upcoming briefings, as they are scheduled, will be kept current on the Internet at http://www.nasa.gov/msl.