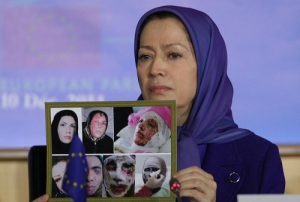 Maryam Rajavi, pictured,  is the President-elect of the National Council of Resistance of Iran (NCRI). Recently while speaking at a conference attended by senior representatives of the European Parliament from various political groups last Wednesday, she exposed Rouhani’s stance as a supposed moderate to be fraudulent …

Mrs Rajavi referred to the bloody record of the velayat-e faqih regime and the gloomy record of its so-called moderate President Mullah Rouhani with atrocities such as the splashing of acid on defenseless women or the stabbing of female students and said: “The regime of velayat-e faqih lacks any capacity to reform. Since Rouhani became President, at least 1,200 have been executed. In the past 25 years, we have not seen as many executions as in the first year of Rouhani’s presidency. Nor have we seen so many opposition members being massacred or taken hostage. Nor have we seen Iranian women being the target of criminal campaigns to this extent.

Sacrificing Basic Human Rights for the sake of our own interests

One of the most obnoxious religious dictatorships on the planet, Saudi Arabia, is apparently our “Friend”, and this is not because we share ideals, but for the very practical burning desire we apparently have for buying their oil and selling them arms. As a result, we opt to officially turn a blind eye towards the gross human rights abuses that take place there.

Would we ever repeat that same catastrophic mistake again?

Apparently we are doing just that …

Mrs Rajavi condemned the conduct of some Western governments that sacrifice human rights in Iran for their relations with the religious dictatorship and said: “Look at the bitter outcomes of European delegations’ visits to Tehran in the past year. The mullahs used each and every one of them to increase executions.”

So what should happen?

She has lived and breathed Iranian politics for decades, has her roots firmly planted in it all, and even served as an organizer of the anti-Shah student movement back in the 1970s.

So from her viewpoint, what does she think should actually happen?

Mrs Rajavi expressed her abhorrence for the continuation of the six-year siege against Iranian dissidents in Iraq (Camp Liberty) and urged the EU to ‘change its policy and show resolve in face of the brutal theocracy ruling Iran’.

If you have no idea what that Camp Liberty reference is, then click here.

If you have ever wondered if it is perhaps time for us to stop imposing our own ideas of what should happen, and perhaps start listening to the voices of the people concerned, then here is a voice for you to pay attention to.

Should we carry on listening to just the dictators and mullas, or should we now perhaps recognise that they do not represent the people of Iran and have no real legitimacy at all.

Now is the time to listen to the voices that cry out for basic human rights, demand rights for women, and oppose the mad dash for the production of weapons of mass destruction while millions of ordinary Iranians starve and are being brutally oppressed.

In fact who better than the voice of President elect of National Council of Resistance of Iran (NCRI), a position she has held since 1993.