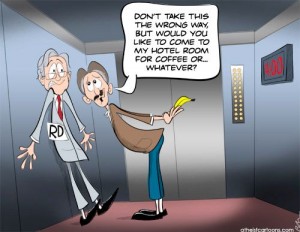 A bit of a fuss has been set in motion. Many of you may already be up to speed so I don’t propose to go into too much detail, but I’ll start with a few links for the truly curious:

OK, so what is all the fuss about?

The story is that Rebecca Watson attended a conference and spoke about sexism in the skeptical community. At 4am she was closing down the bar with fellow skeptics, declares she is gonna go to bed, so gets on the elevator, and a guy from the bar hops on, too. The guy on the elevator says: “Don’t take this the wrong way, but I find you very interesting, and I would like to talk more. Would you like to come to my hotel room for coffee?”. Rebecca says “no”. Later, on her video blog, she tells the story and simply says …

Just a word to the wise here, guys. Don’t do that. I don’t know how else to explain how this makes me very uncomfortable, but I’ll just sort of lay it out: I was a single women in foreign country in a hotel elevator with you, just you, and I—don’t invite me back to your hotel room right after I finish talking about how it creeps me out and makes me uncomfortable when men sexualize me in that manner.

In response to that, lots of folks chipped in with comments in various places, and it just so happens that one of the commenter’s happened to be Richard Dawkins (here, its comment number 75).

Now I don’t propose to get drawn into the details of what is now known as “Elevatorgate”. Many disagree with what Dawkins wrote, as a result there is now a proposal to boycott Dawkins.

Rebecca has now called for a complete boycott of Dawkins here. Also we now have the skepchicks launching a letter writing campaign against Dawkins here.

OK, let me try a couple of quick questions now:

We (skeptics / atheists) have a great deal in common, we are refusing to drink the woo cool aid being offered to many, but it is also true to observe that we have no party line. I can guarantee you that when chatting with others in the community you will often be faced with folks who have views and/or opinions that are not the same as yours, and thats OK. We also have one huge advantage over many other communities, as we debate, we look for evidence and when presented with new evidence that proves us wrong, we change our minds. In fact, it is fairly common for most of us to have believed crazy stuff or spouted silly views at one time or another, and so are quite open to rational discussion and changing our minds.

If you really wish to boycott everybody with whom you disagree with, you will end up in complete isolation. So while I might not agree with every utterance ever issued by Richard Dawkins, (this specific case being an example), I do not propose to join any boycott; we both still have too much in common, and I for one still respect him for his rational stance on so many other issues.