“Fair & Balanced” is a trademarked slogan used by Fox news, so I can only speculate that somebody there has a huge sense of irony.

Another slogan they have also used during the 2008 electon was “We Report, You Decide”. OK, fair enough, I’ll give you a few details and then you can decide.

By now I’m sure you can guess where I’m going with this, because many of you are already aware that Fox News is simply a right-wing propaganda machine, the very concepts of unbiased reliable and balanced are quite alien to them.

The progressive media watchdog group Media Matters for America has cataloged what they claim are the ten most “egregious examples” of “distortion” by both Fox News and its TV personalities. The criticisms include several examples of cropping quotes from President Obama, Vice President Biden, and Vice President Gore so they appear out of context, using image manipulation software to edit the appearance of reporters from The New York Times, and using footage from other events during a report on the November 5 “Tea Party” rally in Washington DC. They claim the intention is to make it appear as if a larger number of protesters attended the event. Media Matters also called attention to the December 4 edition of Fox and Friends and accused the show of misleading their viewers with a “questionable graphic” that showed the results of a Rasmussen Reports climate change poll adding up to 120%.

Do they really manipulate reality like this? You bet they do, here are examples of some of the above: 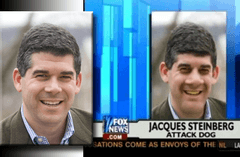 Here is a photo of New York Times reporter Jacques Steinberg manipulated to make him look creepy. The one of the left is reality, the one on the right is the Fox News doctored version.

This specific example dates to 2008.

Now moving on, we find it is not isolated, here is yet another example of exactly the same treatement. 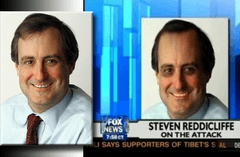 Yep, once again, the original is on the left and the fox distortion is on the right. Its New York Times reporter Jacques Steinberg with yellowed teeth, “his nose and chin widened, and his ears made to protrude further.”

Does any of this really matter?

Well yes, because you have millions who tune in and have a degree of trust that the information they are being given is both reliable and accurate, when quite clearly it is a gross distortion driven by a specific political agenda. Even the white house knows and refers to Fox news as  “not a news network”.

You can read lots more about the bias of Fox news here.

As we go through life we sup information from a wide assortment of sources and then learn by experience which we can depend upon for reliable information and which are vectors for distortions of reality, so I’m sure you can by now form your own view as to which camp you can categorize Fox news in.

When faced with folks who distort reality for the sake of a specific political agenda – be skeptical.