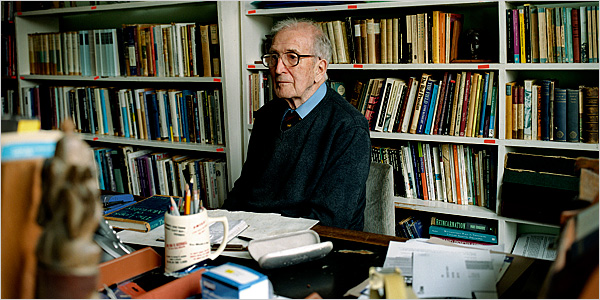 Antony Flew, was a rather famous British philosopher who was also a strong advocate for atheism. His arguments included these ideas …

In fact, at the age of 27 he wrote a paper that is perhaps the most widely read philosophical publication of the second half of the twentieth century in which he argues that the entire concept of a god is meaningless.

Then he later supposedly changed his mind.

There was a book, entitled “There is a God: How the World’s Most Notorious Atheist Changed His Mind“, that was supposedly written by Flew himself, but it turns out that was not the case.

Mark Oppenheimer, a New York Times journalist, dug into all this and discovered that Flew had not in fact written the book at all. In his 2007 article, he writes …

As he himself conceded, he had not written his book.

“This is really Roy’s doing,” he said, before I had even figured out a polite way to ask. “He showed it to me, and I said O.K. I’m too old for this kind of work!”

When I asked Varghese, he freely admitted that the book was his idea and that he had done all the original writing for it. But he made the book sound like more of a joint effort — slightly more, anyway. “There was stuff he had written before, and some of that was adapted to this,” Varghese said. “There is stuff he’d written to me in correspondence, and I organized a lot of it. And I had interviews with him. So those three elements went into it. Oh, and I exposed him to certain authors and got his views on them. We pulled it together. And then to make it more reader-friendly, HarperCollins had a more popular author go through it.”

So even the ghostwriter had a ghostwriter: Bob Hostetler, an evangelical pastor and author from Ohio, rewrote many passages, especially in the section that narrates Flew’s childhood. With three authors, how much Flew was left in the book?

It is worth reading all of that article, it is a fascinating insight into how Flew himself was simply taken advantage of by some Christians with a specific agenda.

Was he really taken advantage of?

If you read the book itself, you will find some rather crass creationist arguments that any half decent philosopher would have seen through, so yes indeed, clearly it reeks of bovine waste and is not his work at all.

What should set alarm bells clanging in your head is that he does not give any rebuttals for the arguments he had for being an atheist, but instead simply leans upon a design argument, one that misrepresents much of what we actually know.

Appendix A is supposedly a discussion of whether “God” has communicated anything to humankind, but is instead just an attack on Richard Dawkins, and also demolishes a few straw men.

Appendix B is billed as a “dialogue” between Flew and biblical scholar about the Resurrection, in which Flew supposedly asks just three one line questions and the rest (about 20 pages) is religious drivel. For example, Q: Do we have a proof that Jesus was real? A: Evidence is so vast that it is not worth mentioning … and so no actual evidence is cited at all, you are supposed to just “believe”.

Oh, and we also supposedly have an endorsement of Christianity by Flew, but there is nothing at all in the book to justify such a stance – clearly this book is simply PR, or to be a bit more blunt, it’s a con job.

If indeed you do not currently find the design argument compelling (which essentially boils down to, I have no idea how X could have happened naturally, therefore God), then you will not find anything at all in this book that will change your mind.

It may in fact be true that Flew did become a deist, but he never ever made the leap to theist, and even that deist step is perhaps explained by him being essentially love-bombed by some Christians in his old age and steered in that direction.

If you actually would like to be convinced, then this is not the book for you.

In the end it is evidence that matters, not opinion


If indeed he had actually changed his mind and became a Christian (he never ever did), then would that make any difference?

No, not at all because what matters is evidence, not opinion or belief.

The claim is that there is a god that manifests in our reality, and the evidence for that claim is exactly zero. To hijack an elderly philosopher, convince him to express a “god did it” conclusion by presenting him with lots of “here is some really complex stuff that we simply can’t explain naturally”, and then package it all up into a book in which it is claimed that he endorses Christianity and that he actually wrote the book, when he did no such thing and openly said so himself, is grossly dishonest.

Botton Line: do not be fooled by this compilation of incandescent vapours and translucent materials (smoke and mirrors).

5 thoughts on “Antony Flew – did he really change his mind?”