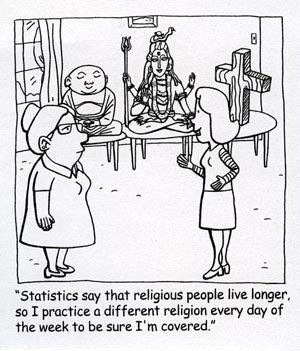 There is apparently a new study that has just been published in which it is being asserted that those that are religious will live a longer life.

The study, found within JAMA Internal Medicine, is entitled:

Association of Religious Service Attendance With Mortality Among Women

and there they claim …

Frequent attendance at religious services was associated with significantly lower risk of all-cause, cardiovascular, and cancer mortality among women. Religion and spirituality may be an underappreciated resource that physicians could explore with their patients, as appropriate.

Note the vague link words of caution applied to that conclusion (highlighted), well you can be sure that the media stories running with this discarded that suggested caution.

OK, so the paper itself is behind a paywall, but I do have it and have taken a look.

What exactly did they measure to conclude that religion yields a longer life?

They used data from the Nurses study where every couple of years the Nurses involved self-reported via a questionnaire. This paper starts with data from 1996, then rolled forward to see what happened, and this is how they established their extraction of data from the raw data lake …

.. and that analysis then leads them to this conclusion …

In this large prospective cohort of US nurses, we found a consistent inverse association between frequent attendance at religious services and all-cause mortality, cardiovascular mortality, and cancer mortality. Compared with women who never attended religious services, women who attended services more than once per week had a 33% lower mortality risk; results were robust across different race/ethnicity groups, different analytic strategies, and in sensitivity analyses.

There are a couple of important things to note here.

All they have is a correlation, they have not established a causal relationship, so why oh why have they concluded that “Religion and spirituality” is the cause (or at least very strongly implied it is by not highlighting that this is just a correlation)?

They did not have any data that specifically measured how religious individuals actually were, but rather had access to data that recorded how often individuals claimed that they attended a religious group. These two things do not necessarily align. What they may in reality be measuring is how socially networked specific individuals were. People are often attending religious groups because other family members or their friends do, and so this can often be seen, not as a religious activity, but instead something that is more akin to a social club. Within US culture church is often how you engage socially within the wider community, and so a more viable conclusion here (perhaps) is that women who are also nurses that are deeply socially networked live slightly longer.

This is not a study of a representative sample of the population, the only individuals measured were nurses in a very specific age range over a very narrow timespan (1996 to 2012), and so you really can’t viably apply any conclusion to the entire population, especially if you exclude all the men and anybody who is not a nurse and aged 50+.

Remember also that within US culture, not being religious makes you a target for a lot of negative attitudes, and that alone can for some cause a considerable degree of stress that might potentially impact lifespan.

We have data and we have a clear correlation, but sitting on top is a very clearly subjective and quite biased interpretation that has slotted in without any real justification.

We should perhaps also remember that the entire basis for all of this rests upon what was self-reported by the individuals who took part. Nobody actually verified anything …

Incidentally, looking at the data we do have, I can see something rather interesting …

… but the conclusion they reach is that attending religious services explains the better lifespan and the smoking had nothing to do with it … seriously!!

Am I alone in thinking that the conclusion they leap to is highly dubious and completely unfounded?

“This study does not suggest that clinicians prescribe attending religious services as a way to be more healthy,”

… and yet the media will no doubt run with this as a story that claims that science confirms that being religious helps you to live longer, (for example here, and here, and here, and so on) despite it being a completely unfounded claim. There will be no pushback because within the highly religious US culture it panders to an existing bias and acts as a confirmation of something that millions want to hear.

In other words, those that are religious will no doubt take comfort in yet one more myth being added to their already quite extensive collection of myths that are embraced as truth.

1 thought on “Do religious people really live a longer life?”