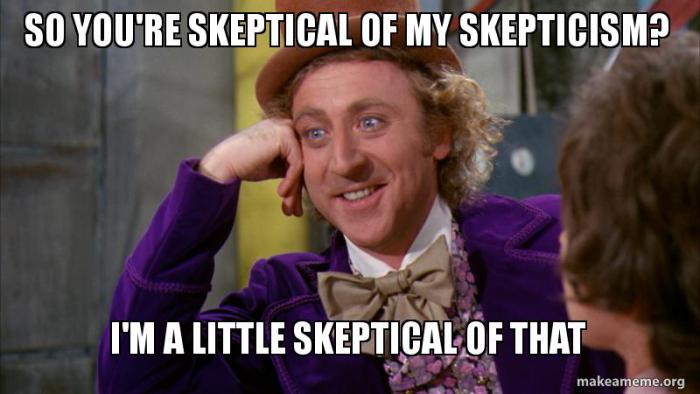 If you are plugged into the skeptical community then you might have become aware of the talk given by science journalist John Horgan at the Northeast Conference on Science and Skepticism (NECSS) last weekend. It was (I’ll be polite) rather controversial. Others used different terms, for example Orac refers to is as a “self-congratulatory wank”

After the talk, he then published the text of it on Scientific American, so you can read it all yourself.

So basically the issue was this – he expresses, to a room packed full of skeptics, skepticism regarding their skeptical focus, and in return finds that they are rather skeptical about this because they realised that he did not really know what he was talking about.

John Horgan does of course have a bit of a pre-existing reputation for being an individual who delights in stirring up controversy, and so this was exactly what happened.

Incidentally, as an aside, if you are wondering “who?”, then you can find his wikipedia page here.

Stephen Novella who invited him to give the talk, has written a detailed response to it, and so you can find that here …

The big lesson here is this – if you are going to criticize a movement, discipline, subculture, science, or group from the outside, to the point of telling them what they should be doing, you should at least have a working knowledge of that group.

After reading his article, it is safe to say that Horgan does not have the first clue about scientific skepticism. The result was a parade of straw men supported by cherry picked and often misinterpreted examples.

Scientific skepticism, like most other movements, includes a complex variety of opinions and approaches, and certainly has undergone a great deal of growing pains in the last decade. I, of course, cannot vouch for every self-described skeptic. But I have a fairly thorough knowledge of the major players.

Skeptics (despite what our critics claim) are thoughtful, self-critical, and not afraid to take on any fight. We have addressed all of the issues that Horgan raises, and in a much more sophisticated fashion than Horgan himself. We are already miles past the superficial framing that Horgan gives.

Horgan also misses several important points that skeptics have already made in defense of our chosen scope. We address the full range of issues within our purview, what Horgan would call soft and hard targets, because it is all useful. Sometimes we deconstruct simplistic and obvious pseudoscience because it provides a teaching moment, so that our audience will be better able to deconstruct more complex targets.

Further, some of what Horgan thinks of as soft targets are still hugely important issues within our culture. Homeopathy remains a mutli-billion dollar industry. Who is going to take it on if not skeptics? The greatest gap between scientific and public opinion is over the safety of GMOs. Again – who is slowly turning this ship around?

Others have also posted a few thoughts on it, for example Orac (a pen name, and yes I know his real name, most who read him do) tossed his reaction to it all into the mix …

… after Steve’s epic deconstruction of Horgan’s self-congratulatory wank, there doesn’t seem to be much left for me, but that never stopped me before …

…The bottom line is that, contrary to what Horgan implies, the skeptic movement, be it big-S or little-S, does not dogmatically worship at the altars of Richard Dawkins, Michael Shermer, James Randi, or anyone else, and it can walk and chew gum at the same time. Horgan would know that if he weren’t so clueless about just what skepticism is and what skeptics do. Yes, we can be tribal at times, but no more so, I think, than any other large group. Basically, after all this time, the kids are all right.

… and Daniel Loxton also joins in …

For the entire history of scientific skepticism, folks in our weird and wonderful little field have heard two criticisms offered with metronomic regularity from people who are “skeptical of the skeptics.”1 One is the obvious: “Skeptics are closed-minded!” The other, no less predictable or routine, is my topic today: “Why do you bother with this trivial stuff about pseudoscience and the paranormal? Aren’t there more important things to worry about?”

Skeptical of the Skeptics

Stepping outside the bubble is commonly recognised amongst most skeptics as healthy, and so listing to those that do not agree with you is a potential opportunity to understand where they are coming from, and to even learn something new. Mr Horgan had an opportunity to speak and this did indeed present the potential for something interesting, but alas it was not to be. Instead it was simply an illustration of his lack of understanding of what skepticism actually is or does today, and so skeptics have been expressing skepticism regarding his skepticism of the skeptics. I include myself within that last sentence.

When Michael Marshall tweeted that very point to Mr Hogan, his defence was to play the “tribal” card …

No, just makes you a run-of-the-mill Skeptic defending his tribe.

… er no, not really, if somebody starts attempting to tell you what you should and should not be doing, then skepticism of that is not “tribalism”. This is perhaps his standard fallback whenever faced with those that don’t agree with him.

Meanwhile even Nature gets in on this …

Nature, the highly prestigious science publication, is now commenting on all this and has the latest updates.