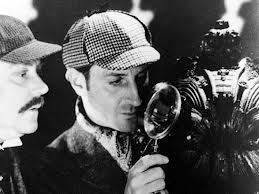 While in a debate recently, one chap justified his assertion by deploying the following quote …

“When you dismiss the impossible, whatever you have left, however improbable, is the answer.”

Recognise it? Yep, Sherlock Holmes (or Spock if you prefer), well the precise quote is this …

“You will not apply my precept,” he said, shaking his head. “How often have I said to you that when you have eliminated the impossible, whatever remains, however improbable, must be the truth? We know that he did not come through the door, the window, or the chimney. We also know that he could not have been concealed in the room, as there is no concealment possible. When, then, did he come?”
The Sign of the Four, ch. 6 (1890) Sherlock Holmes in The Sign of the Four (Doubleday p. 111)

It sounds great, but quoting a fictious character to justify a logical stance should set alarm bells ringing. Since this quote is so well-known, lets take a brief look at it. 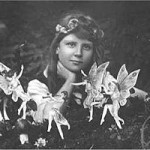 First, was Arthur Conan Doyle a good logical thinker? Not really, this is the same guy who was conned by a couple of teenage girls into thinking that Fairies were real.

Looking at the famous Cottingley fairies picture on the right you can clearly see that all the girls did was cutout a few cardboard figures. That was the immediate conclusion of the family, but unfortunately the pictures got into circulation and eventually Conan Doyle heard about them and was totally convinced they were real, even going as far as writing stuff like this …

My heart was gladdened when out here in far Australia I had your note and the three wonderful pictures which are confirmatory of our published results. When our fairies are admitted other psychic phenomena will find a more ready acceptance … We have had continued messages at seances for some time that a visible sign was coming through

(You can insert your face-palm here)

Anyway, what I’m trying to tell you is that the famous and often quoted phrase clearly did not work for the author himself. Why not? Well because it contains a couple of logical fallacies.

Have you truly eliminated all other options as “impossible”. If you have one last thing that is improbable, them there are a lot of possibilities here, and this last improbable conclusion should not be simply accepted. While it should of course be given due consideration, what about the following …

Sherlock Holmes may indeed be great fiction, but in the real world, the ability to posit a long string of events perfectly is more likely to lead one to a false conclusion.

Don’t lean upon the flawed logic of fictional characters, if you do then you may indeed end up embracing complete fiction as fact.

10 thoughts on “Beware The Logic of Sherlock Holmes”