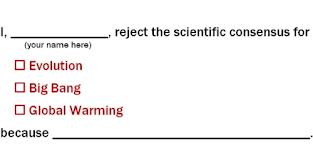 There is a rather interesting article in Edge that has been written by Paul Bloom, a psychologist at Yale University, and also Deena Skolnick Weisberg, a doctoral candidate in psychology at Yale University. The paper is entitled “WHY DO SOME PEOPLE RESIST SCIENCE?”, and is in fact a modified version of a paper published in Science entitled “Childhood origins of adult resistance to science“.

Some people believe rather crazy things, for example that evolution is wrong and is just a myth, or that the world is only 6,000 years old. The actual reality is that evolution is a well-established fact, and the world is billions of years old, not because “we believe”, but rather because there is verifiable scientific evidence that confirms it. Yet even when presented with the evidence, many prefer to embrace palaeolithic religious myths, so what is going on?

Well, the paper gives us a couple of good insights …

There are two common assumptions about the nature of this resistance. First, it is often assumed to be a particularly American problem, explained in terms of the strong religious beliefs of many American citizens and the anti-science leanings of the dominant political party. Second, the problem is often characterized as the result of insufficient exposure to the relevant scientific facts, and hence is best addressed with improved science education.

We believe that these assumptions, while not completely false, reflect a misunderstanding of the nature of this phenomenon. While cultural factors are plainly relevant, American adults’ resistance to scientific ideas reflects universal facts about what children know and how children learn. If this is right, then resistance to science cannot be simply addressed through more education; something different is needed.

They then go on to explain that the developmental data suggests that resistance to science will arise in children when scientific claims clash with early emerging, intuitive expectations, that this resistance will persist through adulthood if the scientific claims are contested within a society, and will be especially strong if there is a non-scientific alternative that is rooted in common sense and championed by people who are taken as reliable and trustworthy.

The punchline at the end is this …

The community of scientists has a legitimate claim to trustworthiness that other social institutions, such as religions and political movements, lack. The structure of scientific inquiry involves procedures, such as experiments and open debate, that are strikingly successful at revealing truths about the world. All other things being equal, a rational person is wise to defer to a geologist about the age of the earth rather than to a priest or to a politician.

Given the role of trust in social learning, it is particularly worrying that national surveys reflect a general decline in the extent to which people trust scientists. To end on a practical note, then, one way to combat resistance to science is to persuade children and adults that the institute of science is, for the most part, worthy of trust.

I suspect I’m not alone in being frustrated at times by those who persist in making utterly daft assertions … evolution is a myth, earth is 6,000 years old, etc… and even after you go through it with them, the belief persists and survives. Well, this perhaps explains why such thinking is often immune to reality and gives some insights, and the root appear to be down to whom you trust as your primary source … address that, and I suspect the rest might then begin to fall into place quite naturally.

1 thought on “Why do well-educated smart people reject scientific ideas?”