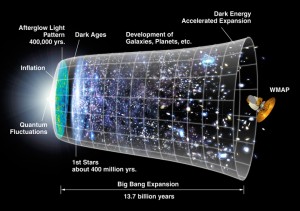 First Cause is an argument that often comes up and only today I came across a Muslim making the claim. I also found a chap called Matthew Warner babbling about it on the Catholic Register. Here is how Mr Warner makes his case ...

Atheists belittle beliefs that are based on faith. Yet when I look around the world, I find atheism requires much more of a leap of faith than my Christianity.

Yet, somehow these days believing (the obvious) that somebody put it there is seen as just a bunch of hocus pocus mumbo jumbo unscientific nonsense. After all, when we arrived, the meal had already been prepared. Did you see somebody prepare it? Do you have any scientific evidence to support your claim? No. Therefore, (so goes the popular illogic) it is much more reasonable to conclude that nobody prepared the meal until such proof presents itself.

Ah yes … sorry about that … I should have warned you that you were about to facepalm. It is of course another first cause claim, but he spices it up with the claim that rejecting first cause requires “faith”, and yes he really is being daft enough to actually claim that the null hypothesis is a statement of faith.

So lets now take a quick look at the “First Cause” argument. It comes in various flavours that include:

If you boil it all down to the basics, the claim is essentially that something caused the Universe to exist, and that this First Cause must be God. Often by extension, the claimed god is not any old anonymous god, but is usually the specific god concept believed in by the claimant. What an amazing coincidence – of all the thousands of gods humans have believed in, theirs turns out to be just the right one and all the others are just myths. For example Mr Lane Craig deploys the Islamic kalam argument, but asserts that it proves his specific Christian god concept and not the Islamic variation.

OK, so what are the problems with this argument?

The most immediate and obvious reply is to ask, “But what caused God?”. The standard answer is, “Ah, but God has no cause, god is an exception to that rule”. So essentially, an entire layer of pointless complexity called God is invented and then declared to be an exception to the rule that everything has a cause. If you want to get into the game of deciding that there is no cause for the first cause, then it would be far simpler to simply decide that the universe itself has no cause, there is no need to invent additional and utterly pointless layers of complexity, especially when there is no credible objective evidence that can justify such a leap.

Clearly causality applies to the known world but we have no evidence to verify that it applies to the universe at large, that is simply an assumption. When we think of the big bang, the rapid expansion of the early universe from the singularity, we think of that as the start of both space and also time. The thought that something causes something else describes a sequence of events one after the other in space-time. If you then ask questions such as what caused the big bang, the start of space-time, you are in fact asking a meaningless question. It is perhaps akin to asking what is south of the south pole.

Problem 3 – It is a modern variation of palaeolithic thinking

Once upon a time our ancestors faced deeply mysterious things, lights in the sky, thunder, wind, and so as an attempt to grasp meaning they attributed these to be manifestations of supernatural entities. We now know a lot more and understand all these to be quite natural – no gods required. Our current knowledge and understanding has an ever-expanding boundary, but right now the origin of the universe is still a mystery. There are of course many avenues of research and also thoughts regarding possibilities such as multiple universes, but so far no conclusions .. yet. Right now, when faced with this unknown the “god caused it” claim is simply a reversion to our earlier palaeolithic approach of attributing supernatural entities to the things we don’t understand. This is indeed an answer, and as in every other instance of its deployment, it is not the right one.

Problem 4 – The leap from deism to theism

Even if you accept the premise, which I don’t for the reasons above, it is at best a deist stance and is not in any way a theist stance.

The First Cause claim is not a credible answer and does not withstand factually based criticism, so don’t let others attempt to fool you with it. The problem with invented answers is that they hinder real progress and stop people from seeking the right answer.

“Creation science is an attempt to give credibility to Hebrew mythology by making people believe that the world’s foremost biologists, palaeontologists, and geologists are a bunch of incompetent nincompoops.” – Ron Peterson

21 thoughts on “Debunking the First Cause argument”