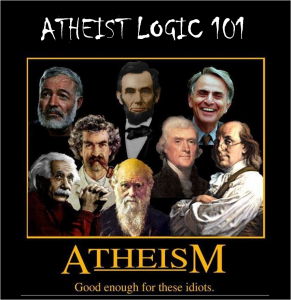 Rabbi Moshe Averick, an ordained Orthodox Rabbi, wrote an article in Algemeiner a few days ago that attacks what he calls “The Flawed Logic of the Atheist”.

OK, first a couple of side points, then we will dive in and see what he thinks.

What the heck is “The Algemeiner” and why have I never heard of it? – The Algemeiner Journal is a New York-based weekly newspaper, covering American and international Jewish and Israel-related news. It is printed in English, with a small Yiddish section. Fox News called it “the fastest growing Jewish newspaper in the United States.” … er, exactly how many Jewish newspapers are there?

What motivates the Rabbi to attack what he calls “Atheist Logic”? I suspect he has two reasons, one is that he correctly perceives the rising tide of reason and critical thinking as a threat to his belief system and so needs to inoculate his community against it. The other is that he has a book to sell, it is entitled, “The Confused and Illusory World of the Atheist.”. (two reviews at that Amazon link, one positive and one that is not). He apparently also does a lecture tour on the subject of atheism and belief in God at universities and colleges.

OK, so this is his hot topic, one he will have given much thought to, and since he is reaching out to his community in this article, the arguments he presents will be the core of his message, the strongest most compelling points that he uses to debunk non-belief.

He starts out by quoting Dr. Stuart Kauffman, an Origin of life researcher. Now  before we dive into that … yes, this is the same Dr Kauffman who wants … “a unified culture where we see God in the creativity of the universe, biosphere, and humanity” … stunned silence … Kauffman is an interesting chap who is a humanistic atheist, but also has a few crazy ideas. So the good Rabbi leverage’s that and quote-mines some juicy chunks from Dr Kauffman that aligns with his beliefs and then declares

“The obvious solution to the Origin of Life, a creator with a “super-intellect,” as obliquely suggested by the late Sir Fred Hoyle

To sum that all up,he is telling us, “Well gosh darn, this is all very complicated, I have no idea how it really happened so quite obviously my god did it”. Ah but to spice it up he also very cleverly deploys it as an appeal to authority, so it comes across as him simply pointing out what some subject matter expert has said.

When faced with an appeal to authority, ask yourself this question, “What is the current scientific consensus?”. When considering the origin of life, you can read all about it on the Wikipedia Abiogenesis page, it should come as no surprise to discover that “God did it” is not one of the models being currently explored. In our reality there are things that are wrong and things that are not wrong. The things that are accepted as not wrong have that status, not because somebody famous or important has declared it to be so, but because it has been tested and verified.

The Argument from Ignorance or “God of the Gaps”

He anticipates the response to his “Origin of Life” claim (obviously he has had this debate before), and so he replies by correctly outlining what an argument from ignorance is and then claims, “Both of these objections are baseless“.

Information does not imply intelligence, he is simple mistaking complexity for intelligence. If curious to dig into the details of all this then you can do so here … and yes, it is still an argument from ignorance, he has failed to establish his claim.

Who Designed the Designer?

He does not actually refute this, he simply points to another article (here) where he claims to refute it. So if you surf on over there and digest it all you rapidly discover that he does the usual religious thing of claiming, very verbosely, that there exists beyond our reality a spiritual supernatural reality and a supernatural entity that always existed. Actual evidence presented for this claim … yep, exactly zero.

So in essence, his ultimate answer is a non-answer, it tells you a heck of a lot about his beliefs, but nothing at all about reality … and once again he has failed to establish his claim.

Apparently he derived this example of jaw-dropping stupidity from “Talmudic study” …. sigh!.

“Rabbi, over the past couple of centuries scientists have established one heck of a track record for themselves. They have uncovered many of the natural laws that guide the workings of the world around us, including amazing discoveries about how living organisms function. The accomplishments of scientists and modern science can only be described as dazzling. It makes perfect sense to assume that they will succeed in discovering the purely natural processes that led to the origin of life from non-life on this planet.”

I have seen this argument presented by many atheistic bloggers, including the ever-noxious P.Z. Myers …

So how does he refute this expectation? He makes up an example of a well-respected historian claiming some historical event previously unknown is true with no evidence for the claim and then points out that you need evidence for claims. He then asserts that the claim that life had a natural origin will be verified by science is invalid because there is no evidence to support that claim.

He then proceeds to bury himself in semantics because Dr. Kauffman used the phrase “if life crystallized” … and goes off on a long rant that hangs on that one word “if”. It is essentially, “Ah ha, so by using the word IF you are admitting special creation is an option” … and quickly shovels several layers of “appeal to authority” on top of it all.

Does his claim stand? Nope.

The Argument from Infinite Possibilities or “Atheism of the GAP”

He starts out with “I accuse the atheist of using the most serious form of flawed logic of all.“, then proceeds to describe Russell’s teapot. Yep, you can see where he is going, he then writes …

The notion that the awe-inspiring levels of functional complexity and specified information found in the simplest living bacterium is the result of some mysterious unguided, undirected process is an extraordinary claim. Extraordinary claims require extraordinary evidence.

That is of course correct, and so right now the most honest answer, when considering the origin of life, is that we don’t know exactly how. However, the only game in town is a natural explanation, the thought that some supernatural entity did it is truly extraordinary, especially when there is no evidence at all for any such entity. No sane rational clear thinking individual working in the field is seriously considering the possibility that some magical religious entity did it. For the exact same reason they are also not considering the possibility that a pink invisible unicorn did it either.

He then babbles on with … “The National Center for Science Education (NCSE), headed by atheistic biologist, Dr. Eugenie Scott, has for years been in the forefront of the battle to prevent the teaching of flaws in evolutionary theory or Intelligent Design theory in US public schools.” … duh, well yes, because “Intelligent Design” is not science, it is a religious belief that has zero science behind it. We also don’t teach astrology beside astronomy, nor do we teach alchemy beside chemistry for the exact same reason.

And of course to finish things off he has one great big honking “Appeal to Ignorance”, all served up with layers of “Appeal to authority”, but not one single jot of actual evidence for anything being claimed. It is basically, “I have no clue how life could have started naturally and here are quotes from well-known folks telling you that is not impossible so clearly it is akin to winning 200 hands of black-jack in a row at a Las Vegas casino.”

In the end what we find when we dig into all this is nothing at all except incandescent vapours and reflective surfaces (that’s smoke and mirrors to you and me). It is the usual daft content-free religious hand waving, but wrapped in layers of “appeals-to-authority” and “appeals-to-ignorance”.

It will most probably work for the intended audience he has targeted this at, his specific community of believers, and will perhaps successfully lull them into a false sense of confidence that their belief has credibility … but run the same stuff past the non-believing community, and it becomes rapidly apparent that it is a well-crafted illusion.